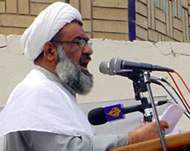 Robert Reid of AP reports that the Iraqi government is acknowledging differences with the US over the proposed security agreement intended to regulate the role of US troops in Iraq.

The USG Open Source Center translates remarks last Friday of Jalal al-Din al-Saghir of the Buratha Mosque in north Baghdad. Saghir is a leading member of the Islamic Supreme Council of Iraq, the most influential party in the government of Prime Minister Nur al-Maliki and leader of the Shiite coalition, the United Iraqi Alliance.

Saghir’s views are likely close to party leader Abdul Aziz al-Hakim, the power behind the al-Maliki throne. That is, Saghir is no Muqtada al-Sadr but rather a pillar of the Shiite-American alliance in Iraq. I view Saghir’s criticisms of the proposed security agreement between Bush and al-Maliki as a sign that the negotiations are in real trouble.

In his second sermon, Shaykh Al-Saghir discusses the security agreement between Iraq and the United States. He says: “There has been much talk in the newspapers and space channels about the so-called security agreement as if we have already signed this agreement or about to sign it. I can say that we, who are concerned about this agreement, felt as if we do not know what is taking place in this regard.”

He adds: “Negotiations took place and the nature of negotiations is that they take place in accordance with timetables or at stages. In the first days of the negotiations, this and that side present what they have. The Americans presented what they want and the Iraqis then presented what they want. They discussed these issues and agreed or disagreed on some issues. However, they are not the side that accepts or decides on these issues. They have presented their ideas at the beginning and an agreement was reached to the effect that the negotiating delegation will be led by the prime minister, the term of reference is the Political Council of National Security, and the side that accepts or does not accept this agreement is the parliament.”

He adds: “Frankly speaking, we found out that most of what the Americans presented conflicts with the principles on which we wanted the agreement to be based on. We said that the first principle is Iraq’s sovereignty. We will not accept anything that might undermine Iraq’s sovereignty. You have heard this from us before and we will reiterate it and will continue to be committed to it. This is because Iraq’s sovereignty is the main principle here.”

He says: “So, we do not accept anyone to practice one-upmanship with us over our patriotism and concern about the Iraqi people or Iraq’s unity. We do not accept that such talk be addressed to us in a form of advice or in a way to draw our attention. We are not children in politics so that we will not pay attention to the bases of the political process. We have organized the Declaration of Principles between us and the Americans based on rules. The first rule, which was read at the Council of Representatives, calls for liberating Iraq from the mandate of Chapter VII. We said hundreds of times that liberating Iraq from the mandate of Chapter VII guarantees Iraq’s sovereignty. Now, some sides put obstacles in front of us and say that the Iraqi funds will be squandered. For the sake of safeguarding Iraq’s sovereignty, we are ready to give all our money. We want to sacrifice our souls in order to safeguard Iraq’s sovereignty. So, what is the significance of money here? We have suffered throughout this period in order to protect this homeland and to keep it standing on its feet with pride and dignity.” He adds that “the other clause is that the agreement should protect the Iraqi democratic establishment.” He says that the protection of Iraq “is one of the constants.”

He adds: “We do not this patriotism to be in the way of the patriotism of so-and-so that filled the world with slogans, but when Israel asked them to come and sign, they went and signed. We are not like this. We could have done this from the very beginning. I do not divulge a secret here when I say that the Americans came before the occupation and before the fall of the regime to Shahid al-Mihrab (Muhammad Baqir al-Hakim), may God be pleased with him, through the ambassadors that were here, and told him that we want the Badr forces to enter Iraq under the American flag or the flag of the multinational forces, and we will give you what you want, and you will have the same powers of the multinational forces. We simply said, provided that the issue needs no smartness or contemplation, that, Shahid al-Mihrab, may God be pleased with him, said that we will not enter except under the one Iraqi flag. After this, threats and intimidations were made and we were prevented from entering Iraq under our name, the Badr Organization, or the Iraqi Islamic Supreme Council (IISC). You may recall how many times our offices were attacked and how many of our people were arrested. After that the Americans realized that they were mistaken, taking into consideration that it is not us who make concessions on basic and principled issues.”

Al-Saghir says: “Through the resistance we have pursued from the beginning, which is the political and peaceful resistance, we said that instead of inflicting losses on our people, we might succeed in political resistance. We realized that we have made many and major steps forward. Therefore, I reassure the Iraqi people and my dear brothers and sisters that we will not proceed with any agreement without allowing the entire people to see its entire letters. This is the first issue in this agreement, which, if it was signed, we would not relinquish main principles: The first is Iraq’s sovereignty; the second is Iraq’s Constitution and democratic institutions; and the third is the unity of the Iraqi people and Iraq’s territorial integrity, from its north to its south and from its east to its west. These are main principles for us.”

He adds: “When we talk about the Iraqi Constitution, we say that this Constitution will not allow any attack on any people or any state from Iraqi territory.”

He says: “I hope that our brothers will not listen to the news media and their exaggerations. I also hope that the politicians, particularly those outside Iraq, will not fall in the traps of the news media.” He says that these counter news media “want to topple us in any way.”

Speaking about the “increasing daily suffering” of the Iraqi people, Al-Saghir says that although the security situation has improved and that Iraq has a lot of money, there is a “shortage of electrical power and we have daily problems with electricity.”