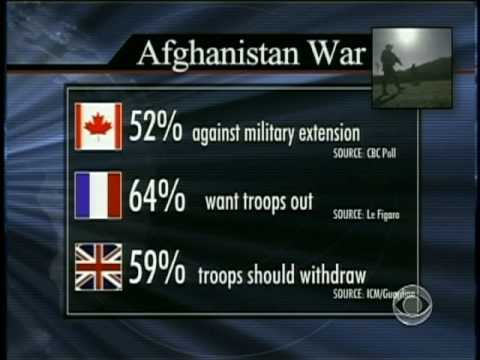 A Taliban-set roadside bomb hit a German convoy in Kunduz province on Saturday, likely in vengeance for the NATO air strike on hijacked fuel trucks that killed so many locals. Four German soldiers were lightly injured. On Sunday morning, another US soldier was killed, in eastern Afghanistan. The Taliban are becoming increasingly proficient in laying roadside bombs and have been running rings around Western troops who deploy conventional warfare tactics.

CBS reports on Gen. McChrystal’s visit to the site of the Kunduz blast and his admission that civilians and children were harmed.

Is it just me, or is this a startling headline? — “EU nations slam NATO air strike in Afghanistan”! France, Spain and even Italy attacked the bombing (aren’t they, like, in NATO?)

Eux.TV reports on the EU foreign ministers’ call for Afghanistan policy to evolve from being military to being focused on development aid.

I don’t know. You can’t really do reconstruction aid in a country that lacks security. We saw that in Iraq.

Meanwhile, in Germany itself a political row broke out over the bombing only three weeks before Germans go to the polls. Politicians in the Social Democrat Party were scathing on the bombing, criticizing the center-right government of incumbent Chancellor Angela Merkel, which they say did not inform parliament quickly enough of the incident, and saying that the bombing violated the new rules on aerial bombardment agreed to for Afghanistan. The SPD wants a timetable for German withdrawal from Afghanistan, while Merkel stands for an open-ended commitment of the sort insisted on by President Barack Obama. The Kunduz air strike is a much bigger deal in Europe and Afghanistan than it is in the US. The Potsdam district attorney’s office is even considering filing criminal charges against the German colonel who ordered the air strike.

Abdul Matin Sarfaraz reports from Kunduz Province that locals are now saying that the NATO bombing of two hijacked fuel trucks killed more than 150 civilians and left 20 others wounded. Some 15 children were among the dead. Villagers told the visiting reporter that the Taliban had left the site after inviting the villagers to take the petroleum in the trucks, which had become hopelessly mired in a riverbed. They showed him 50 graves of dead civilians. He adds, “A 50-year-old woman bitterly cried while standing in front of her ruined house. She said her three sons, husband and a grandson perished in the bombardment.”

Kunduz residents are furious. This weekend, an NYT reporter and his translator appear to have been kidnapped when they went out to the site of the bombing. One Afghan pundit remarked dryly that when the US recently announced a new strategy in Afghanistan, no one suspected it would be . . . mass murder.

The intrepid Rajiv Chandrasekaran reports that the German colonel who called down the 500-pound bomb on the fuel trucks did so on the basis of aerial surveillance footage and a single local informant; as a result, he assumed that the dozens of figures around the truck were Taliban. In fact, the Taliban had dragooned civilians into helping them attempt to move the fuel trucks out of the river, and then had announced that the villagers could just have the petroleum. The decision went against the spirit, at least, of the new policy announced by Gen. McChrystal, that aerial bombings would not be conducted on the basis of a single informant’s report.

Aljazeerah English reports on the rage in Kunduz against the foreign troops and the Afghanistan government’s weakness. Kunduz, a northern mixed province of 1.5 million, has only 1,000 policemen. One-third of it is under Taliban control (which is to say, the Pashtun-majority districts are almost entirely controlled by the Taliban).

Meanwhile, fears that the Aug. 20 election in Afghanistan was fraudulent are stirring tensions that could come to haunt NATO troops. The Times of London reports today that in the southern district of Shorabak, where tribal leaders decided to support rival candidate Abdullah Abdullah, Karzai’s brother had the polls closed and then stuffed ballots were sent to Kabul giving Hamid Karzai 100% of the votes. This incident, denied by the president’s brother, is one of thousands of irregularities being reported to the authorities. One Afghan newspaper is now openly calling the election a “farce” (mazhakah)

The Kunduz bombing gone awry, and perhaps also the disappointing election, seems to have provoked an outburst of frankness among European politicians so far unmatched in the counterparts in the Obama administration. British Prime Minister Gordon Brown has now admitted that the UK has plans to cut the number of British troops in Afghanistan from 9,000 to 4,500 over the next 3 to 5 years. Canada has already announced that its forces will be out of Afghanistan by 2012 (which will leave a significant security gap in Qandahar province that Britain may be signaling it declines to fill).

One reason for the British decision to begin going home is Whitehall’s despair over convincing its NATO allies to increase their troop levels in Afghanistan, or to show willingness to send those troops to the Pashtun south where most of the hard fighting and dying is. Most NATO forces in Afghanistan view themselves more as peace keepers and aid workers than as as war fighters (though it should not be forgotten that French, Polish, Italian, and other NATO troops have fought and died in Afghanistan).

European publics are opposed to the Afghanistan mission by increasingly large margins, and it is not impossible that in 5 years, the US will find itself almost alone there among Western powers. Were the NATO members to gradually desert Obama there, it might even have the effect of breaking up NATO or much damaging its effectiveness. Even now, the bickering over who is providing what support is not edifying.