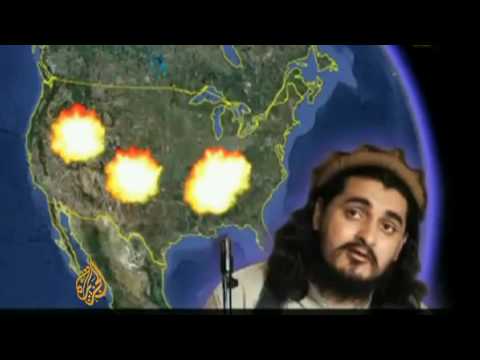 As US authorities arrested Faisal Shahzad, a Pakistani-American recently returned from Peshawar, on suspicion of ties to the Pakistani Taliban and involvement in the Times Square bomb plot, bad news is coming from Afghanistan itself. Pashtuns in the affected areas appear to be angry at the US invasion of Marjah this winter and convinced that it has spurred Taliban recruitment.

Pakistani Taliban leader Hakimu’llah Mahsud, thought killed in January, has resurfaced to threaten attacks on US cities and to announce his sympathy with the slain leaders of the al-Qaeda franchise in Iraq. Aljazeera English has video:

Now, turning to the other side of the Durand Line. Opinion polling in war zones is fraught with difficulties, but the results of a new poll by the International Council on Security and Development carried out among over 400 male respondents in parts of Helmand Province and Qandahar, Afghanistan, in March, 2010, are extremely troubling. (Executive summary here in html, the whole report is here in pdf format.) I conclude from this sounding that the planned US invasion of Qandahar city is likely to be a disaster that turns millions of Western Pashtuns against the US and NATO. The Eastern Pashtuns are already regularly demonstrating and demanding that the foreign troops depart their provinces.

The Marjah campaign this winter involved US and British troops coming into a rural part of Helmand province in the Pashtun southwest of Afghanistan that had been dominated by the Taliban. The farms in this region specialize in poppy growing, and there are reputedly many makeshift heroin labs there. Some observers estimate that 40 % of drug profits overall flow to the Afghanistan insurgent groups, so presumably the US wanted to damage a profit center of the enemy.

But what you’d like to hear from the people of Marjah and nearby Lashkargah, and from Qandahar (the next US target) is that they are sick and tired of the Taliban, felt oppressed by them, and are really glad to see NATO and Afghanistan national army troops show up. Such anti-Taliban sentiments appear common, after all, in the Swat Valley of Pakistan, where from all accounts locals were glad that the Pakistani army cleaned the Taliban out last summer, even though they are dissatisfied with the resulting displacements, property damage and slowness in the delivery of reconstruction aid.

But the Pashtuns of southern Helmand and of Qandahar are not talking like the people of Swat Valley. The report finds that “61% of those interviewed feel more negative about NATO forces than before the military offensive. ” We aren’t winning hearts and minds, folks.

In a startling statistic, nearly 80% of these Pashtun men say that they are now often or always angry, a doubling of this response from one year ago. Nearly half are specifically furious at NATO (over “occupation, civilian casualties and night raids”) and over a third are upset at war and instability (likely also blamed on NATO). Only 9 percent say they are angry with the Taliban!

Almost everyone said that the Marjah campaign produced more refugees (ICOS estimates at least 30,000), who are now living in tent cities or makeshift refugee camps.

Nearly 60% of respondents said they believed the Taliban would just return to Marjah, so the US has not in fact succeeded in convincing locals that they are even capable of the “clear” operation in the take, clear, hold and build strategy. Skepticism about holding and building is therefore likely to be even higher. And 95 percent, almost all, believe more young men have joined the Taliban in the aftermath of the Marjah campaign.

Another troubling finding is that slightly over half now believe the angry young men are motivated to join the Taliban by a belief in “jihad,” i.e. a desire to fight to end the foreign military occupation of their country. Other studies have suggested that many Taliban footsoldiers are just in it for the money. If these respondents are correct in their perception, it would be a troubling development– that young Pashtun males are becoming ideologically radicalized against NATO. A majority still feels, however, that if jobs could be provided to the angry young men, it would draw them away from the Taliban.
The report says, “The principal demand expressed by 70% of Afghans interviewed is the immediate provision of help from NATO, the international community and the Afghan government: they expect shelter and food for the refugees, the rebuilding of destroyed property and the clearing of landmines.” They don’t think they are getting a ‘government in a box’ as Gen. McChrystal promised. They don’t think they are getting basic post-campaign aid. No NGOs are operating in Marjah itself and only two in nearby Lashkargah.

Although the respondents do want security and two-thirds do hope NATO will clear insurgents from the road to the capital of Kabul from their region, and even say they would a similar clearing in Qandahar (!), given their other responses I conclude that they want security imposed in a way that does not displace people or kill innocents. I.e. they want better and less intrusive policing, not a military attack on a civilian area.