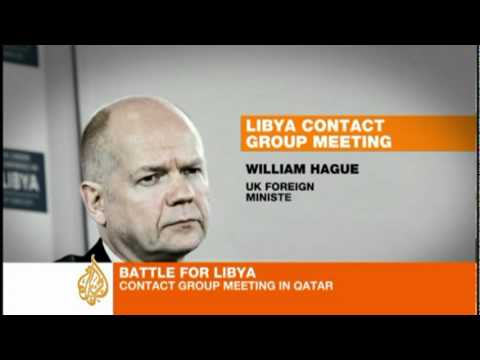 Al-Sharq al-Awsat reports in Arabic that the Transitional National Council in Benghazi says that it has a network of cells in Tripoli and plans to launch an uprising in the capital. A Tripoli resident who talked to the newspaper by phone said that most people in Tripoli feel as though they have been taken hostage by Qaddafi’s goons, and that if they had the opportunity they would rise up against him, as the people in Eastern Libya had already done. Pro-TNC sources say that the demonstrations in favor of Qaddafi in the center of the capital are staged and unrepresentative.

The pan-Arab daily also reports Free Libya sources as saying that their allies in the west have repelled attacks by pro-Qaddafi forces in the al-Jabal al-Gharbi region of the West, on the cities of Yafran, Nalut and Zintan, which are in the hands of Free Libya partisans. The latter forced the Tripoli brigades to retreat, captured some of their vehicles, and left them exposed in the desert, where NATO aircraft struck at them.

Nations supporting United Nations Security Council Resolution 1973 on protecting Libya’s population from massacre met in Doha on Wednesday and concluded that more efforts are needed to ensure that protection. Reuters says for the first time this Libya Contact Group forcefully called for Qaddafi to step down and recognized instead the Transitional National Council in Benghazi as legitimate, calling for it to be given more aid. They affirmed that Qaddafi has lost the legitimacy to rule. As a result, Benghazi will likely be provided with an infusion of cash, possibly including funds belonging to the Libyan government which have been frozen in NATO countries. Qatar’s crown prince pointed out that the humanitarian crisis in Libya is not a natural catastrophe but derives from political decisions made by Qaddafi, and said the time had come to arm the Free Libyan Army. Italy concurred.

In the meantime, the pro-TNC cities had some better news on Wednesday, as they pushed pro-Qaddafi attackers back from the downtown area in Misrata, and those in the besieged city of Zintan attacked the enemy position on a hill nearby. Qaddafi had massed tanks outside both western cities and made an attempt to invade and reduce them, as he had Zawiya and Zuara on the western cost. NATO airstrikes on the tanks and other heavy weaponry and on government weapons depots have slowed or stopped the deadly advance of Qaddafi in Misrata and Zintan. While the action has saved hundreds or thousands of lives, it has not stopped the bombardment of civilians or halted the siege of the two urban areas. Qaddafi has cut off water, food and medicine to Misrata in hopes of forcing it to surrender to him. These measures, applied to a civilian population area for purposes, are a crime against humanity.

UN Secretary-General Ban Ki-Moon, in the meantime, said that a humanitarian crisis looms in Libya. Nearly half a million Libyans have been made refugees by the regime’s attacks on urban areas already, and over time over half of Libya’s 6.5 million people may need urgent humanitarian aid if the fighting continues.

The World Food Program also warned that the fighting and turmoil are preventing food supplies from being replenished inside Libya, and that there is a pressing need for food aid to be delivered to Tobruk, Benghazi and Misrata, which are open ports.

As a result of the forward-leaning predominance of opinion that came out of Doha, Britain and France agreed to step up their air strikes on Muammar Qaddafi’s heavy weaponry and weapons depots. On Wednesday, NATO aircraft hit targets at Misrata, Sirte and Aziziya, including a government arms depot.