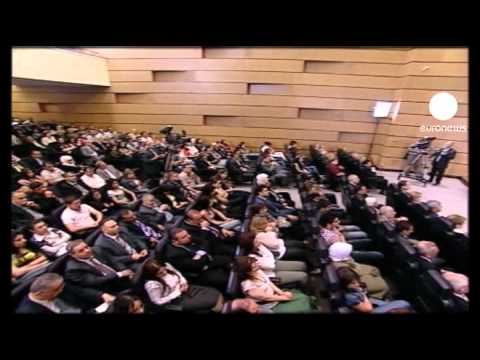 Tens of thousands of Yemenis took to the streets Monday to demand an end to the regime of Ali Abdullah Saleh and a move to a transitional government and elections. Saleh is recuperating in Saudi Arabia after surgery for injuries sustained in a rocket attack.

Among the demands of the demonstrators is the departure of the president’s sons, Ahmad Saleh and Khaled Saleh. Ahmad commands the dreaded presidential guard, and Khaled is also a military commander.

Bashar al-Asad on Monday gave his third national speech since the uprising against him began about three months ago, and it appears mainly to have made many of his countrymen more angry at him.

Euronews reports that al-Asad tried to distinguish between potential dialogue partners among his critics and those who, he said, were mere vandals and saboteurs. Al-Asad maintains that parliamentary elections will be held later this summer, but his family has presided over a one-party state since 1970 and many question how genuine his commitment to reform is.

President Abdullah Gul of Turkey slammed al-Asad for not opening his country faster to multi-party elections, showing Ankara’s increasing frustration with the Syrian leadership. Turkey under the Justice and Development Party had reached out to al-Asad and repaired relations with Damascus, allowing a big expansion in bilateral trade. But al-Asad is, from Turkey’s point of view, squandering all that progress and threatening Turkey’s economy by being so repressive and provoking a months-long uprising, as well as chasing dissidents over the border into Turkey, where they are an economic and political liability for the latter.

Deposed Tunisian President Zine El Abidin Bin Ali and his wife Leila Trabelsi have been sentenced by a Tunisian court to 35 years in prison for embezzlement. While it is clear that the president and the first lady were extremely corrupt while in office, it seems to me that the main purpose of the sentence is to ensure that Bin Ali does not attempt to return to the country, since he now would be arrested at the airport. Bin Ali gave a cock-and-bull interview maintaining that he only flew to Jidda last January to deliver his wife there, and had planned on returning but the plane left without him. Dear Zine: the country left without you.

This Observer editorial argues that the widespread availability of digital video recording devices, including those in smart phones, has allowed people abused by their governments to create an evidence trail that can then be deployed at forums like the International Criminal Court. Sri Lanka, Bahrain and Libya are singled out as governments that have committed war crimes against their people and where these have been recorded and disseminated by video.

Addendum: Egypt’s prestigious al-Azhar Seminary, a leading center of Sunni Muslim authority in the world, has issued a document calling for a civil, democratic state that does not discriminate on the basis of religion or gender and is dedicated to the welfare of the people. The document also seeks more independence of al-Azhar from the state, asking that its rector be elected rather than appointed by the president of the country. This development in the thinking of the al-Azhar clerics is momentous in my view, not only for al-Azhar and Egypt but also for Sunni Islam in general. Al-Azhar does have to overcome suspicion in some quarters that it is an Establishment institution too close to the old Mubarak regime. But many ordinary Sunnis do value its fatwas.