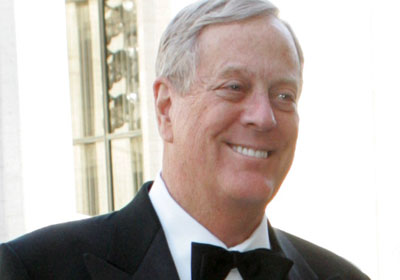 Bloomberg’s revelations that a subsidiary company owned by the radical rightwing billionaire brothers, Charles and David Koch, sold millions of dollars in refinery equipment to Iran has produced widespread outrage on the blogosphere, given that Koch-backed politicians of the Tea Bagger persuasion have been among the more vociferous hawks calling for war on Iran.

The report alleges that the Koch brothers’ companies routinely paid bribes to get contracts abroad, that they essentially usurped petroleum from federal lands, that they knowingly exposed consumers to benzene poisoning, and that they did business with Mahmoud Ahmadinejad as recently as 2007. The Koches are perhaps the most far-right figures in American politics that do not actually wear white robes; their father was among the founders of the extremist John Birch Society.

But the cries of outrage won’t likely do any good. Their companies do $100 billion a year in business and each of the bothers is worth $20 billion. In the United States, which is ruled by its business class the way medieval England was ruled by the Norman aristocracy, being a billionaire is most often a get out of jail free card. Some troglodyte from the Wall Street Journal that CNN kept serving up to us for economic analysis actually once said on air that there is no point in punishing financiers guilty of securities fraud legally, since they are being taken out of the game and won’t be able to play the markets any more, and that is all the punishment anyone needs. It was like listening to a squire explain why his lord did not deserve to be drawn and quartered for his crimes because just not being able to visit the royal court was condign punishment in itself.

Those innocent of recent history are being overly breathless about this revelation. You want a billionaire trading illegally with Iran and a happy ending? How about numerous examples?

There is Iran-Contra, in which Ronald Reagan had his underlings steal T.O.W. missiles and missile launchers from the Pentagon warehouses, sell them illegally to Iran, take the black money paid by Ayatollah Khomeini to Reagan and launder it through Swiss accounts, and send it to right wing death squads in Nicaragua trying to overthrow the left leaning Sandinista government. The Right wing beatified Reagan and named an airport after him, and nobody ever brings up Iran-Contra any more. Rupert Murdoch made Oliver North, one of the conspirators who shredded the US constitution, a millionaire by putting him on television to tell us war fairy tales.

Bill Clinton had Eric Holder do the paperwork to pardon billionaire Marc Rich, who is alleged to have done illegal oil deals with Iran on behalf of Israel as part of the Iran-Contra scandal and then was accused of declining to pay millions in taxes to the US on his profits. (I don’t know. Do you have to pay taxes on money you make from dealing with a government on the State Department’s terrorism list? I mean, the money is sort of in the subjunctive mood and isn’t supposed to exist in the first place.)

Then, Dick Cheney did business with Iran when he was CEO of Halliburton in 1995-2000. All you have to do is set up an offshore subsidiary run by non-Americans, and you can do all the business you like with Iran. Cheney liked a lot of business with the ayatollahs.

The cries of hypocrisy miss the genius of these scams run on the American public. The companies that defy the spirit of the sanctions on countries like Iran gain valuable experience working on projects there. If the same companies can successfully lobby Washington to go to war against their client, then in Phase IV they will be awarded no-bid contracts on the grounds that no other company has their experience on the ground in the now-conquered country.

Nothing will come of it. Koch-backed politicians will go on rattling sabers at Iran even while they find ways to do business with it. They will go on denying global climate change, and denying that breathing gasoline fumes is bad for you. If they do get up a war on Iran, they’ll make money on that, too. This is because, as OccupyWallStreet.org points out, the system is set up for the 1 percent, not for the 99 percent (us). Your keyboard outrage will pass, and they will go on making billions, and go on making money from the enemy, whether before or after the war.