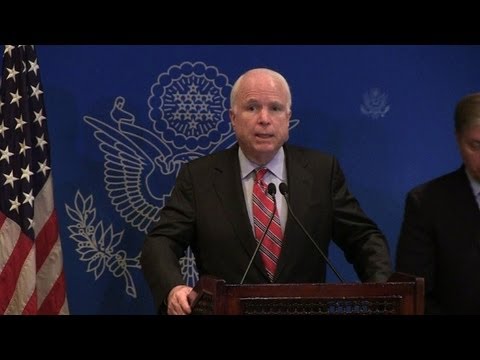 Sen. John McCain and Sen. Lindsey Graham were apparently asked by President Obama to go to Egypt and try to mediate the conflict between the Egyptian military and the Muslim Brotherhood. They are saying some of the right things while in Cairo. The problem is that they have no credibility on the issues involved.

1. McCain and Graham are urging the interim Egyptian government to engage in dialogue with the Muslim Brotherhood. But in winter of 2011 just after the fall of Mubarak, this is what McCain said:

” SPIEGEL: What is your assessment of the Muslim Brotherhood?

McCain: I think they are a radical group that first of all supports Sharia law; that in itself is anti-democratic — at least as far as women are concerned. They have been involved with other terrorist organizations and I believe that they should be specifically excluded from any transition government. “

The phrase “they have been involved with other terrorist organizations” suggests that McCain considered the Muslim Brotherhood a terrorist organization, just as Gen. Sisi does. One of the pretexts on which Sisi has jailed several Muslim Brotherhood leaders is their ties to Hamas and “terrorism.” So how would McCain argue him out of that stance. And someone on record as wanting the Brotherhood excluded from the Essam Sharaf transitional government isn’t in a very strong position to now argue that the Brotherhood should be part of Egypt’s future democratic process.

2. McCain insisted that there was in fact a military coup in Egypt on July 3, and called for political prisoners (the former Muslim Brotherhood elected government) to be released. But McCain supported the military coup of 1999 by Gen. Pervez Musharraf against the elected government of Muslim League leader Nawaz Sharif. McCain dismissed Pakistan under Sharif (who has just returned to power, while Musharraf is under house arrest for having illegally overthrown the government). McCain said, ““Prior to Musharraf, Pakistan was a failed state,” McCain said. “They had corrupt governments and they would rotate back and forth and there was corruption, and Musharraf basically restored order.” That is exactly what Gen. Abdel Fattah al-Sisi, who led the July 3 coup would say about the Egypt of deposed president Muhammad Morsi.

3. Graham doesn’t like people to win elections if he doesn’t like them. When the Palestinian branch of the Muslim Brotherhood, Hamas, won the Palestine Authority elections in early 2006, Graham rejected their legitimacy: ‘Lindsey Graham, a South Carolina Republican senator, called the results “a de facto declaration of war by the Palestinian people against the state of Israel.” ‘ (Toronto Star, January 27, 2006). The US CIA engineered a coup by the PLO against Hamas and overthrew it in the West Bank, but couldn’t dislodge it in Gaza. Why should Gen Sisi treat the Muslim Brotherhood better than Graham treated the fairly elected Hamas Party?

4. One of the Muslim Brotherhood figures in jail is business tycoon Khairat al-Shater, whom the interim government charges with exercising a Svengali-like influence over Morsi and the Egyptian government even though he was not an elected official. WaPo said in spring, 2012, “Mr. Graham said he noticed that Mr. Shater seemed to wield considerable power without holding any public office, and that he saw some American parallels. ”I think they call that Chicago,” the senator said.

5. The US wants the Egyptian military either to free the Muslim Brothers it is holding or to charge them and try them for specified statutory crimes. But Sisi sees them as ‘terrorists,’ guilty of attacks on innocent non-combatants when they ordered a Brotherhood paramilitary group to attack demonstrators in front of the presidential palace in Heliopolis on Dec. 6, 2012. Since Graham wanted Djokhar Tsarnaev treated as an enemy combatant and denied a civil trial, he is hardly in a position to tell the Egyptians they shouldn’t treat the Brotherhood the same way.

6. Graham and McCain are urging the Egyptian authorities to talk to the Muslim Brotherhood and find a compromise, to engage in “inclusive dialogue.” But from Obamacare to Benghazi they have been relentless in their refusal to talk to President Obama in good faith on a whole range of issues and seldom compromise with him. Imagine, the GOP telling Egyptians how to do democracy…