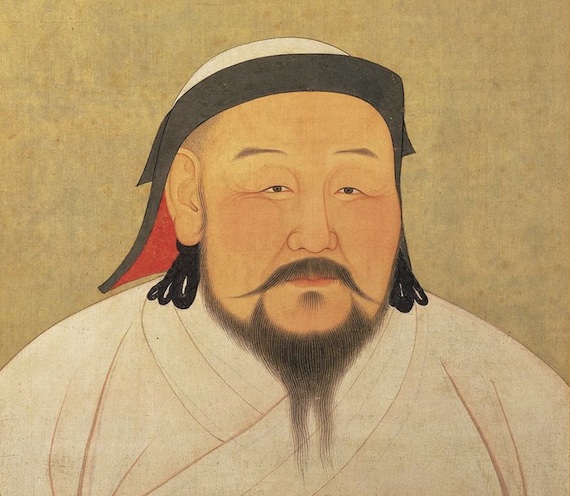 Kubla Khan
Or, a vision in a dream. A Fragment.

In Xanadu did Kubla Khan
A stately pleasure-dome decree:
Where Alph, the sacred river, ran
Through caverns measureless to man
Down to a sunless sea.
So twice five miles of fertile ground
With walls and towers were girdled round;
And there were gardens bright with sinuous rills,
Where blossomed many an incense-bearing tree;
And here were forests ancient as the hills,
Enfolding sunny spots of greenery.

But oh! that deep romantic chasm which slanted
Down the green hill athwart a cedarn cover!
A savage place! as holy and enchanted
As e’er beneath a waning moon was haunted
By woman wailing for her demon-lover!
And from this chasm, with ceaseless turmoil seething,
As if this earth in fast thick pants were breathing,
A mighty fountain momently was forced:
Amid whose swift half-intermitted burst
Huge fragments vaulted like rebounding hail,
Or chaffy grain beneath the thresher’s flail:
And mid these dancing rocks at once and ever
It flung up momently the sacred river.
Five miles meandering with a mazy motion
Through wood and dale the sacred river ran,
Then reached the caverns measureless to man,
And sank in tumult to a lifeless ocean;
And ’mid this tumult Kubla heard from far
Ancestral voices prophesying war!
The shadow of the dome of pleasure
Floated midway on the waves;
Where was heard the mingled measure
From the fountain and the caves.
It was a miracle of rare device,
A sunny pleasure-dome with caves of ice!

A damsel with a dulcimer
In a vision once I saw:
It was an Abyssinian maid
And on her dulcimer she played,
Singing of Mount Abora.
Could I revive within me
Her symphony and song,
To such a deep delight ’twould win me,
That with music loud and long,
I would build that dome in air,
That sunny dome! those caves of ice!
And all who heard should see them there,
And all should cry, Beware! Beware!
His flashing eyes, his floating hair!
Weave a circle round him thrice,
And close your eyes with holy dread
For he on honey-dew hath fed,
And drunk the milk of Paradise.

The poem was penned in 1797 but only published about twenty years later. , was a Mongol conqueror who defeated the highly advanced Song Dynasty and established something close to the borders of modern China, ruling from Beijing. (His cousins went west to conquer Iran and Baghdad, which fell 1258). Coleridge read of Kublai Khan’s summer palace in a 1625 travel book by Samuel Purchas. He put the imagery to Romantic purposes, contrasting war and peace, spiritual and physical pleasures. See WW Norton for Romantic Orientalism

“Coleridge, by his own admission, got the idea of Kubla Khan from yet another history/travel book, that is, Samuel Purchas’s 1613 Purchas his Pilgrimage, Or Relations of the Worm and the Religions Observed in All Ages and Places. Both Richard Hakluyt and Purchas started the tradition of travel literature. Purchas’ last work Hakluytas Posthumous, or Purchas his Pilgrims (1625), containing “A History of the World in Sea Voyages and Land Travel,” and dealing with voyages to India, Japan, China, Africa, the West Indies, and many other places, is actually an expansion of his 1613 work for which he used Hakluyt’s unpublished papers and East India Company records (Thornley and Roberts 30). The original passage in Purchas, Coleridge’s primary source, goes like this:

‘In Xanadu did Kubla Khan build a stately palace encompassing sixteen miles of plain ground with a wall, wherein are fertile meadows, pleasant springs, delightful streams, and all sorts of beasts of chase and game, and in the middle thereof a sumptuous house of pleasure, which may be removed from place to place…. He has a herd of horses and mares, about ten thousand, as white as snow; of the milk whereof none may taste except he be of the blood of Chengis Khan. According to the direction of his astrologers or magicians, he on the eighth and twentieth of August spends and pours forth with his own hands the milk of these mares in the air and on the earth to give drink to the spirits and idols which they worship’ (Purchas 415).

As we can see, the passage describes the superstitious practices of the Tartar/Chinese astrologers or magicians, who arranged to have Kubla Khan throw the milk of the beasts they held in reverence both in the air and on the earth for the spirits and the idols they worshiped to drink, in the hope that such deities would then preserve “the men, women, beasts, birds, corn, and other things growing on the earth” (Purchas 416)…”