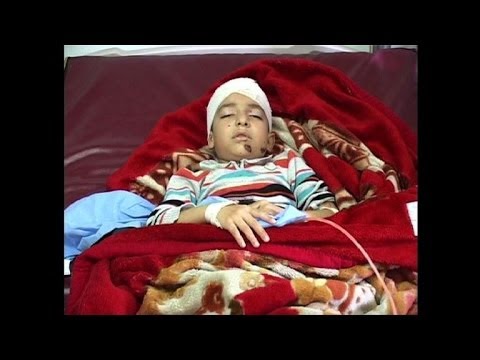 NIQASH visits Fallujah and finds a city in flux. While armed militias control the city and the Iraqi army stands guard outside, markets and shops are still open and everyday life is relatively calm. However it won’t stay this way: more Sunni militants are entering the city, relishing a chance to fight the Shiite government, and medical and fuel supplies are running dangerously low.

Six weeks have passed since the Iraqi government lost control of the city of Fallujah. The city is now surrounded by the Iraqi army and internally it appears to be under the control of Sunni Muslim and tribal militias, although it is hard to tell exactly who is in charge.

As you near the city you see what appear to be preparations for a long battle. Barriers made out of dirt effectively block all four sides of the city. Behind them there are hundreds of armed men, some with anti-helicopter weaponry, and armoured cars.

Although the winter weather is cold – as low as 3 degrees Celsius – the militias behind the barriers avoid making fires because they don’t want the Iraqi army to be able to see their exact whereabouts.

“When the government was threatening to invade a few weeks ago, the militants started planting improvised explosive devices around the four entrances to the city,” Saeed al-Jumaili, a resident of Fallujah, tells NIQASH.

“Houses on roads leading into the city have also been mined in order to stop any attempts to enter,” al-Jumaili says. “It’s a complicated network of mines that’s only known to a few of the militants.”

So who exactly are the militants in charge inside Fallujah? Currently what is best described as a rebel military council controls the city’s security. It is composed of various Sunni Muslim factions, most of which are armed or militant. This includes the Army of Al Murabiteen, the Asadullah al-Ghalib brigades, Hamas of Iraq and a number of other Sunni Muslim brigades. Also on the military council though are local Sunni Muslim men who once served in the Iraqi army. Apparently most of the latter do not consider themselves radical and they say they are not affiliated with extremists or Al Qaeda.

Al Qaeda is also represented on the council though and its faction goes by the now-well-known name of the Islamic State of Iraq and the Levant, or ISIS – locally known as Daash. The only group that doesn’t seem to be playing a role on the council are local security forces, like the police.

The armed factions that are not affiliated with Al Qaeda have many men at their disposal but they don’t have as many arms. And while ISIS only has several hundred men in the city, they are well armed, well trained and battle hardened. Daash also has several dozen suicide bombers in the city.

All up, the council has 15 members including community leaders, tribal elders and members of the various armed factions. It meets twice or more each week to discuss the security situation in Fallujah. It makes decisions by voting.

One of the most prominent members of the council is the cleric, Abdullah al-Janabi, who is known for his radical opinions; he is from Fallujah and in the past he was in charge of setting up Sharia religious courts in the city. Al-Janabi is also a Salafist, an adherent of a far stricter branch of Sunni Islam. In the 1990s he opposed Saddam Hussein’s regime and was arrested for it – however he was released shortly before the 2003 US-led invasion of the country. After 2003 Al-Janabi was also well known in the West for opposing the US presence in Iraq and for fighting against US forces in Fallujah. Al-Janabi is apparently coordinating the various armed groups, including ISIS.

The most significant decision made by the council so far was to persuade ISIS not to kill dozens of Iraqi soldiers it had imprisoned around the city in secret locations. The council was convinced that it was better to keep the men alive as they could be useful later when negotiating with the Iraqi government.

It’s hard to know exactly what else ISIS is doing in Fallujah as there have been conflicting reports. At a recent meeting with community leaders in Ramadi – another city that the government had lost control of but which has since been pacified – acting Iraqi Defence Minister Saadoun al-Dulaimi said that al-Janabi was again establishing strict, religious courts and threatening locals who violated Islamic law with lashing and other punishments.

However other locals told NIQASH that the ISIS members they had met had not harmed any of the residents and that they didn’t attack local police or the former members of the Awakening movement, a home grown initiative dating back to 2006, which saw tribal groups halting their fight against the US military and taking arms up against Sunni Muslim extremists instead, particularly Al Qaeda, in Iraq. Instead they just asked them to quit those jobs, the locals said.

If this is correct then that would suggest that ISIS has learned from its past mistakes, where it alienated locals with strict religious rulings. The group seems to be being more diplomatic when dealing with local tribal elders, who could choose to expel them if they wished.

According to the most recent official figures about half a million people live in Fallujah. It’s thought that as much as 60 percent of the population has left the city now though, in order to escape the potential fighting. The United Nations refugee agency has said that as many as 300,000 people have left Anbar province, where both Fallujah and Ramadi are, to escape the violence.

That is why in Fallujah one will see many doors that have pages of the Koran attached to them – the residents have fled and they hope that the holy book will prevent thieves or militias from occupying their houses and stealing their belongings.

Still, in the city centre, conditions are generally calm. People are moving around without fear, they can buy groceries and they can gather in mosques.

The Iraqi army controls the southern, eastern and western entrances to Fallujah and the militants control the only other entry point. The latter is the one used by most people to enter and leave the city and it is also how food supplies still get into the city.

Up until now there have been no problems with food supplies. Shops and markets are still open and people are still buying groceries as usual. What has changed is the prices. Many things now cost as much as three times more – for example, a box of potatoes, which used to go for US$1 is now sold for US$3.50. There is also plenty of bread still available as the city has stocks of flour and it’s possible to bake the bread at home in wood burning ovens.

“The city is currently relying on stocks of food stored in warehouses,” Jamal Mohammed, the owner of a store in the central city, told NIQASH. “There are some big supermarkets in Fallujah and they have big warehouses. Although,” he added, “some of the food is now past its expiry date. But people are still buying it – they don’t really have a choice.”

The city’s mosques are also providing free meals to Fallujah’s people and even some of the armed groups are doing this, in order to gain the trust of locals.

Fallujah is also connected to nearby agricultural areas and some of these are also under the control of the insurgents. That has actually seen the price of meat drop in Fallujah because farmers are scared that their cattle and sheep will be killed by indiscriminate shelling by the Iraqi military, so are trying to sell them early.

In other areas life is not normal: schools and government departments closed their doors almost immediately as did banks in Fallujah. The latter haven’t been robbed, says one Fallujah resident, Omar Zaidan, because they’re being guarded by armed men. One bank did open its doors for a few days to pay out on pensions but then it closed again, Zaidan says.

Fallujah has not noticed any major power outages. It is however experiencing a fuel crisis. Several residents told NIQASH they hadn’t used their cars for two weeks because there’s no petrol and they’ve been using wood fires because there’s no fuel available for heating either.

Another big problem is the lack of drinking water. The Euphrates River passes through the city and locals have been collecting water from there; however this water is not suitable for drinking. This hasn’t stopped locals drinking it though.

Perhaps the most alarming issue though is the lack of medical supplies and equipment in Fallujah. According to one source in the central public hospital, several pregnant women have died and viral infections are spreading.

“Many of the people who were injured even lightly in the military bombardment of Fallujah are now in danger, or have died, because there’s a lack of supplies like blood, medicines and vital nutrients,” the source said. “We have started to operate on people without anaesthesia and unfortunately there have been some deaths on the operating table. We’ve been having to use the same needles over again because we’re worried we’re going to run out. Also there are about 65 foreign employees working here – mostly from Bangladesh – and they all want to leave the city.”

The medical source also estimated the number of deaths in the city: 72 killed and 441 wounded, mostly because of the Iraqi army shelling of the city. The shelling, which didn’t seem to be well targeted, has only caused further resentment of the Iraqi government, led by Shiite Muslim Prime Minister Nouri al-Maliki, and the Iraqi military outside the city’s borders. “The government is collectively punishing the city,” one tribal leader complained.

And despite some humanitarian aid, this situation does not look likely to be resolved any time in the very near future.

“The number of insurgents in Fallujah grows every day,” Rashid al-Muhammadi, a Fallujah local and a tribal elder, told NIQASH. “Everyone wants a gun now. The parents of the younger people who were killed want guns and they’ve decided to join the insurgent groups because they’re upset at the government’s behaviour and at the shelling.”

Additionally, as a high ranking security source who wished to remain anonymous, said: “there are hundreds of militants coming to the city every day. They’re coming from Ninawa, Diyala and Salahaddin. They all want to fight the Iraqi army.”

For several years now, Fallujah has been a symbol of Sunni Muslim rebellion against the powers that be, whether those were US-led forces or the current Shiite Muslim-led government.

Most people in the city don’t seem to believe there is any diplomatic solution available to them. They think they are in a similar situation to Iraq’s Kurds, who fought to separate themselves from Iraq in the past, after years of deadly persecution by former Iraqi leader Saddam Hussein.

“It will be very difficult to make things the way they were before,” agrees Shakir Mohammed, a university professor living in Fallujah. “The people of Fallujah won’t accept the government’s injustice and they’re very much convinced that they need a genuine and lasting solution to their current problems.”

Perhaps the current attitudes of those in Fallujah are best summed up by recent goings-on in some of the city’s major mosques. Militant cleric al-Janabi has been giving speeches at one of the city’s central mosques – before prayers begin al-Janabi will often be harshly critical of the Iraqi government and the country’s politicians.

Meanwhile at another large mosque in the city, speeches are given by Abdul Hamid Jadou, a very popular tribal leader; these focus only on humanitarian issues in Fallujah – he doesn’t say anything good or bad about the presence of militants.

AFP footage of aftermath of shelling of Fallujah from the beginning of February: