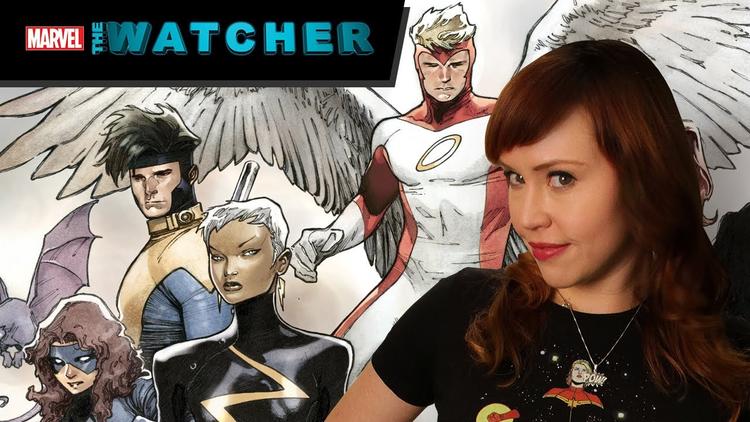 (By A. David Lewis for IslamiCommentary)

She is, admittedly, the first to headline her own comic book series. And, to be fair, this is the first time since the 1970s that a new character – Muslim or Christian, Asian or Caucasian – has starred in an on-going Ms. Marvel book.

In 1977, it was U.S. Air Force security officer Carol Danvers who starred as Ms. Marvel, the super-strong, invulnerable, flying do-gooder. Danvers had been an ally of the heroic Captain Marvel, and it was accidental exposure to alien energies that imbued her with her powers. She served as a member of the Avengers super-team, but eventually fell out of the spotlight with readers. Her Ms. Marvel series ended in 1979, and, until approximately 2006, she floundered under a number of different writers and books: she was raped, de-powered, brainwashed, given new cosmic abilities, sent across outer space, reestablished with the Avengers, discovered as an alcoholic, and so forth. (The name “Ms. Marvel” similarly wandered, becoming briefly used by a separate, forgettable superheroine while Danvers herself toyed with being known as “Binary” and “Warbird.”)

Danvers returned to the name Ms. Marvel and her own series again in 2006, but it wasn’t until 2012, under the pen of writer Kelly Sue DeConnick, that the character blossomed into her own A-list status—now as “Captain Marvel,” honoring the memory of her deceased comrade. DeConnick’s Captain Marvel has been hugely popular with fans (many of them enthusiastically declaring themselves members of “the Carol Corps,” particularly for its depiction of a strong, nuanced female character. In Danvers’s own fictional world, her example as Captain Marvel is similarly inspiring all manner of women and men alike.

Fittingly, Kamala is a polymorph – a shapeshifter who can alter the size, shape, or appearance of her body at will. In many ways, Kamala’s superpower is the ultimate expression of her multifaceted personal identity. According to DeConnick, Kamala could be glimpsed in one panel of August 2013’s Captain Marvel #14 — where the unnamed girl was among civilians led to safety by Danvers — but her real debut came in that November’s Captain Marvel #17. On the final page of that issue, the same mystery girl, her face obscured from readers’ view, was shown admiring pictures of Danvers while cautiously testing her new powers. Until author G. Willow Wilson, herself a convert to Islam, began taking interviews on her plans as Ms. Marvel’s writer, this was all audiences knew of Kamala. She was an amorphous figure – an indistinct shape.

There’s a sharp irony to the fact that many commentators sought to fix and pin down Kamala’s profile right from the outset. (Unlike Marvel’s Afghani burqua-clad Dust from X-Men or hijab-clad Pakistani British superheroine Excalibur, Kamala doesn’t cover her head.) Pakistani communities were asked what they thought of the character, comics industry pundits were prompted to predict the book’s success, and readers were polled to gauge excitement. With very limited information available, judgments, both fair and unfair, were cast.

The Infidel Bloggers’ Alliance accused Marvel Comics, the publisher of Ms. Marvel, as “shoving the Religion of Peace down our throats” and “nothing more than a political statement, which only makes it more worthless.” Conversely, Yasmine Hafiz of Huffington Post Religion felt Kamala will actively be “confronting traditional stereotypes and gender norms about what a hero should be.” Like Danvers’s fans, Kamala’s early supporters are already forming their own virtual “Kamala Korps.”

This press on Kamala’s coming also became grist for the humor mill. Satirical pundit Stephen Colbert acted alarmist about a Muslim Ms. Marvel, saying it was evidence of superhero “Sharia creep.” Meanwhile, comedian Conan O’Brien encountered strong online backlash when a member of his staff (purportedly not O’Brien himself) wrote on his Twitter feed: “Marvel Comics is introducing a new Muslim Female superhero. She has so many more special powers than her husband’s other wives.” The tweet was considered in bad taste and was deleted without further comment by O’Brien’s camp.

In advance of Ms. Marvel #1’s official release 2014, Marvel Comics produced All-New Marvel NOW! Point One #1, a collection of vignettes from the publisher’s new “Marvel NOW!” line. In it, readers got their first glimpse of Kamala in action — having less trouble with an animated monster machine menacing a local New Jersey junkyard than with her own family. In the middle of her fight with the “junk thingie,” she is scolded over her cell phone for being late to her cousin’s mendhi (pre-wedding party). The brief, eight-page story spends nearly half of its space addressing familial demands and cultural expectations; present are the lenient father, the steely mother, and Kamala’s own respectful rebellious streak. After what Kamala considers a restrictive life of being a model student and daughter, she is compelled—perhaps by Danver’s example—to carve her own new path: “I am a shape-changing, mask-wearing, sixteen-year-old super ‘Moozlim’ from Jersey City.” (But, before readers give too much credence to any teenager’s depth of self-perception, she notes, “I can change my face, but I wear a mask instead. There are layers of unpackable crazy up in here.”)

Kamala promises to be a complex character, an atypical superhero, and a media lightning rod. And, because of these, her portrayal will certainly rankle some audiences. Will Marvel Comics stand by the character as the months go on? Will she get streamlined and simplified—even foreswear Islam in the face of demi-gods like Thor, of cosmic battles, or of life-and-death traumas? (Of course, the same trials and experiences could end up bolstering her faith or making it more essential to her life.) Or will Kamala end up another cast-off minority character, a publisher’s brave experiment that shines brightly at first but eventually peters out?

Until issues of Ms. Marvel hit stores on February 5, it’s all speculation—and premature speculation at that. Maybe the best way to capture this intriguing shapeshifter is in the simplicity of her own self-description: “My name is Kamala Khan. And I’m here to take out the trash.”

A. David Lewis, Ph.D. is the co-editor of Graven Images: Religion in Comic Books and Graphic Novels, co-author of Some New Kind of Slaughter from Archaia Entertainment, and a founding member of Sacred & Sequential, a collective of religious studies and comics studies scholars. He currently teaches at colleges throughout the Greater Boston area, including Northeastern University, Bentley University, and MCPHS University, and has previously lectured at Boston University, Tufts University, Merrimack College, and Georgetown University. He is a steering committee member for the American Academy of Religion’s “Death, Dying, and Beyond” Group as well as co-editor of the forthcoming Digital Death: Mortality and Beyond in the Online Age. His new regular column for ISLAMiCommentary “Comics & Dialogue: Islam in Graphic Novels” formally debuts on Monday. You can follow him on Twitter @ADLewis.