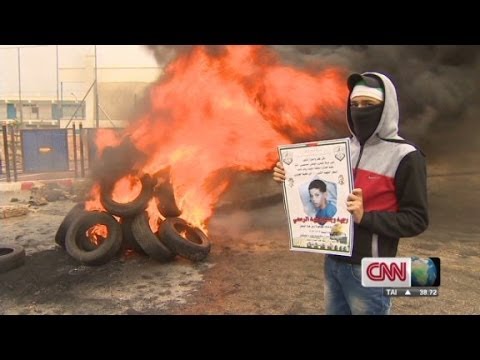 Israeli forces are killing Palestinian civilians in the West Bank — including children — with "callous disregard for human life," enjoying near impunity for likely war crimes, and should be immediately cut off from arms shipments by the international community, declares a damning report released by Amnesty International on Thursday.

"This is a hugely significant development," says Mike Coogan of the U.S. Campaign to End the Israeli Occupation in an interview with Common Dreams. "This report is unequivocal. It clearly points to the perpetrator of crimes — the Israeli military."

Entitled Trigger-Happy: Israel’s Use of Excessive Force in the West Bank, the 87-page report documents mounting violence and human rights violations due to Israeli use of "unnecessary, arbitrary and brutal force," as summarized in an Amnesty statement. The study traces the chilling trail of death and injury this leaves behind.

The report highlights the murder of 22 Palestinian civilians in the West Bank last year, four of whom were children, and 14 of whom were killed at protests. In some of these cases, Amnesty found evidence of "willful killings, which would amount to war crimes," according to the summary.

Sixteen-year-old school boy Samir Awad, from Bodrus, numbers among the dead. He was shot by Israeli forces in January 2013 while protesting Israel’s separation barrier that slices through his village. Bullets hit the back of his head, leg, and shoulder as attempted to flee an ambush. Multiple eye-witnesses testify that he and other young protesters did not pose a danger to the Israeli forces who fired.

“Out of nowhere many soldiers jumped out and ambushed Samir," said 16-year-old Malik Murar, a friend of Samir and eye-witness to his killing, in an interview with Amnesty. They shot him first in the leg, yet he managed to run away towards the village. But how far can an injured child run? Twenty, maybe 30, meters? They could have easily arrested him, especially when he was injured, but instead they shot him in the back with live ammunition… To me this is premeditated murder."

One year later, "authorities have failed to ensure any accountability for his death," the report states.

Samir's murder is one of many that may constitute extrajudicial execution — a war crime under international law — the report reveals.

Others have also been shot in the back, and protests against expanding settlements, the separation wall that annexes Palestinian land, evictions, checkpoints, and restriction of movement are often met with deadly force, the report reveals. These killings are not transparently investigated, leading to an over-all permissive climate for arbitrary violence.

“The frequency and persistence of arbitrary and abusive force against peaceful protesters in the West Bank by Israeli soldiers and police officers – and the impunity enjoyed by perpetrators – suggests that it is carried out as a matter of policy," said Philip Luther, Middle East and North Africa Director at Amnesty.

The report urges an immediate halt to use of deadly force by Israeli forces and calls for the international community — including the United States — to halt all arms shipments.

"Amnesty’s courageous call for cutting all transfer of weapons to Israel is a very significant first step towards a full embargo," said Omar Barghouti — Palestinian campaigner for boycott, divestment, and sanction of Israel — as quoted in Mondoweiss. "Israel should not get away with what Amnesty rightly characterizes as 'war crimes' and 'willful killings' of Palestinian civilians."

The Israeli Army swiftly released a statement and tweet dismissing the report as demonstrating a "complete lack of understanding as to operational challenges the IDF faces." Yet the statements did not directly answer to the specific killings highlighted by Amnesty, including that of Samir.

Coogan said in response, "There is absolutely no excuse for Israel's continued and flagrant misuse of weapons against civilians. Entire families have been affected by this. There is a very clear pattern, including clear video evidence."

He added, "It's about time that Israel is held accountable for this."

I thought it was interesting that the Israeli spokesman who responded said that it had been necessary to injure 8000 Palestinians last year to protect Israelis ‘traveling the roads,’ ignoring the active Israeli theft of Palestinian property and squatting on Palestinian land (the rate of settlement doubled last year). It also begs the question of why Israelis are doing all that driving without having even a visa, in Palestinian territory…