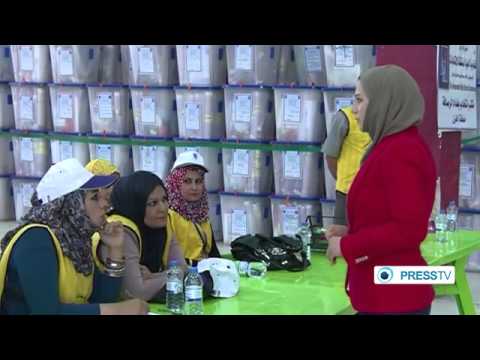 (By Mustafa Habib in Baghdad via Niqash.org)

The official results of Iraq’s general elections are unknown as yet. But current Prime Minister Nouri al-Maliki will not be winning a majority – and his opponents are lining up to keep him out of power.

So far, the preliminary, and as yet unofficial, results of Iraq’s general elections indicate that no single party will have a big enough proportion of votes to gain the majority they would need to rule the country. An estimated 60 percent of eligible voters cast their ballots last week in Iraq’s first general election since US troops left – despite concerns about violence, the turnout was good, slightly higher than the last few decades’ worth of US presidential elections. And the results so far – with no party getting a majority – were generally as expected.

It is generally expected that the political bloc led by the current Iraqi prime Minister Nouri al-Maliki will get the largest amount of votes. But it won’t be a majority. And the fact that no single entity will win a majority means that al-Maliki’s State of Law bloc will need to team up with some other political parties to form a coalition, where they do have a majority.

As one senior member of the State of Law bloc put it, speaking to NIQASH anonymously: “It’s true we didn’t win a majority. But we are still a big bloc and nobody can afford to ignore us.”

“Our planned alliances are not with Shiite Muslim parties but with small Sunni Muslim, Kurdish and independent parties,” the senior source said; al-Maliki’s bloc is mainly Shiite Muslim and after the last election, they teamed up with other Shiite Muslim parties. The source said that when coalitions began to be negotiated after election results became official, that everybody would be surprised.

Al-Maliki’s biggest opponents are his former allies – the two biggest Shiite Muslim Parties, the Sadrist movement led by cleric Muqtada al-Sadr, and the coalition led by the Islamic Supreme Council of Iraq’s Ammar al-Hakim, followed by the Iraqi Kurdish politicians in Baghdad and the Sunni Muslim politicians led by Osama al-Nujaifi, Iraq’s Parliamentary Speaker. All of these major parties have expressed their fervent desire to prevent al-Maliki taking on a third term.

So al-Maliki is in trouble. There is almost no way he can win a majority and gain the 164 seats out of the total of 328 seats available in Baghdad’s Parliament. But analysts now believe he may try to gain control of a third of the seats – that is, 110 seats.

This is one version of what may well be al-Maliki’s plan. The Iraqi Constitution says that the election of Iraq’s President should take place before the Prime Minister is chosen. The President needs to be chosen by a two-thirds majority in Parliament – and it is here that al-Maliki, if he can gain the support of a third of the newly elected MPs, will be able to disrupt proceedings and force his opponents to negotiate with him.

So how will al-Maliki get the support of one-third of the newly elected MPs? Preliminary results indicate that he may win around 75 seats, and possibly he will also be able to claim another 15 seats won by smaller Shiite Muslim parties that support him. But the real answer is that, unexpectedly, he may well be supported by a number of smaller Sunni Muslim parties.

But perhaps this should come as no surprise. When Iraq’s Sunni Muslims began to demonstrate about what they saw as their marginalization and persecution by the Shiite Muslim-dominated government headed by al-Maliki, several of al-Maliki’s political allies from Shiite Muslim parties actually expressed support for the demonstrators. This included members of the Sadrist movement and the party headed by al-Hakim.

For this reason, al-Maliki began to search for Sunni Muslim allies. In fact, in Anbar province, where there is currently violence and unrest- the long term result of those first demonstrations  al-Maliki has managed to bring several prominent Sunni Muslim leaders onto his side. He has presented himself as a strong leader, opposed to extremism and has presented the Al Qaeda offshoot, the Islamic State in Iraq and Syria, as his enemy and the enemy of Sunni Muslims in the province.

In return he has been supported by the likes of Iraqi Defence Minister Saadoun al-Dulaimi, Anbar’s former governor, Qassim al-Fahdawi, and Karim Aftan al-Jumaili, Iraq’s Minister of Electricity. All of these Sunni Muslim politicians led smaller parties in the general elections last week.

In the 2010 general elections, their parties supported the broader, mostly Sunni-Muslim Iraqiya coalition, led by former Iraqi Prime Minister Ayad Allawi. But in these elections they’re supporting al-Maliki. Additionally, given the strained circumstances in which elections were held in Anbar, they’re highly likely to win seats.

Al-Maliki has also been able to find friends in other parts of the country. In Salahaddin, he is being supported by controversial politician, Mishan al-Jabouri, who once supported Saddam Hussein and who has links to extremist groups. A few months ago al-Jabouri announced his support for al-Maliki. The current governor of Salahaddin, a Sunni Muslim, is also close to al-Maliki.

And despite the fact that the northern city of Mosul is a stronghold for leading Sunni Muslim politician, Osama al-Nujaifi, the Iraqi Prime Minster has made some friends there too. This includes several sitting MPs, Abdul Rahman al-Luwaizi, Dildar al-Zibari and Zuhair al-Chalabi.

It will not be clear which of these less senior Sunni Muslim MPs decides to support al-Maliki until the official election results have been declared and negotiations to form a government commence. Nor is it clear what al-Maliki can offer them so that they come onto his side. What is clear is that those negotiations are going to take a long time.

It’s also obvious that there will be two teams during negotiations. One of those will be comprised of nearly all of the next-largest parties who don’t want to see al-Maliki hang onto power. It will be interesting to see how they can convince the smaller parties al-Maliki is wooing, not to support the Prime Minister. And the other team will be comprised of al-Maliki and his rag tag bunch of allies.

Doubtless the haggling over who rules Iraq will take many months. And this will not have any impact on al-Maliki who will continue to head a caretaker government until positions can be filled. Al-Maliki’s government will be able to act in relatively unrestricted way during this time and it is possible that the Prime Minister and his party can use this to their advantage, to formulate bargaining chips and enticements for potential coalition partners.

It is also possible that external influencers will be needed – the Iranians and the US may well be called in to mediate because of the high degree of distrust and unwillingness to negotiate in Iraqi politics today.

At the moment though, how all of this proceeds remains unknown. And right now, actual issues – such as strengthening the economy, providing services to the Iraqi people and ending violence and extremist attacks – do not seem to be on the agenda for any of the country’s politicians, as they gear up for a long fight.