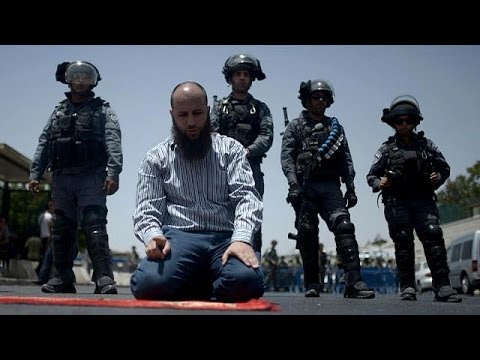 Israel should be investigating these deaths, but instead its forces seem intent on intimidating witnesses and ensuring future abuses won’t be caught on camera. The Israeli response to the killing of two boys looks more like an attempt to cover up than a serious investigation.
-Sarah Leah Whitson, Middle East director

(Jerusalem) – Israeli security forces ordered a Palestinian man to take down security cameras that captured the shooting deaths of two Palestinian boys in May, Human Rights Watch and Defense for Children International – Palestine said today. Footage recorded by cameras on the man’s building prompted an international outcry over the killings.

Israeli military officers berated Fakher Zayed, 47, for sharing the security videos with human rights groups, claimed he had lied and fabricated evidence, and threatened to bring unspecified legal actions against him if he did not remove the security cameras, Zayed told Human Rights Watch and DCI-Palestine. A soldier threatened to “unleash dogs on my children,” he said.

“Israel should be investigating these deaths, but instead its forces seem intent on intimidating witnesses and ensuring future abuses won’t be caught on camera,” said Sarah Leah Whitson, Middle East director at Human Rights Watch. “The Israeli response to the killing of two boys looks more like an attempt to cover up than a serious investigation.”

Israeli forces shot and killed Nadim Nuwarah, 17, and Mohammed Salameh, 16, also known as  Mohammed Abu Thaher, during a demonstration on May 15, 2014, when neither boy posed any threat. On May 19, Defense for Children International – Palestine published footage from Zayed’s security cameras on its website. The Israeli military spokesperson’s office initially claimed the video was “edited in a biased way,” but the full, unedited videos, which DCI-Palestine and the Israeli rights groups B’Tselem later made available to the media, also showed the boys posed no imminent threat to life.

Zayed and another witness who asked not to be identified out of fear for his security told Human Rights Watch and DCI-Palestine that at around 4:20 p.m. on June 17, four Israeli military vehicles with about two dozen soldiers came to Zayed’s carpentry shop, on the ground floor of his building in the West Bank Palestinian town of Beitunia, while he was out delivering wood to a customer. According to the other witness, an officer who identified himself as “Sabri” said that “if [Zayed] is not here in five minutes we are going to burn this carpentry shop down,” and ordered one of Zayed’s employees to call him. When Zayed arrived, Israeli forces confiscated his identification document, told him and his employees that he was not being arrested but taken for questioning, and drove him to the nearby Ofer military base.

At Ofer I was taken into a room that had several captains. They told me that the video I gave to the press was fabricated, that everything I said and all my testimonies are a lie, that this is a serious violation of the law, and that I made the IDF look bad and caused a lot of problems. They told me the cameras need to be brought down within 24 hours. They were all speaking, and I had no chance to respond. There were so many threats. They said it as though they were going to turn the law against me. One of the captains told me: “We will crush you, according to the law.” There were many threats against my family. They told me that I was up against a very powerful force, and I am very small. One of them said, “We will squish you like a bug, you are nothing.” There were no direct violent threats, except when I left that room, one of the soldiers told me that they will unleash dogs on my children.

At 5:45 p.m., Israeli forces drove Zayed back to his building, he said.

Israeli forces had visited Zayed previously and confiscated the DVR equipment that records footage from Zayed’s security cameras as well as his computer. Soldiers and an officer first came to Zayed’s building on May 22, the same day CNN published its own video footage showing one of the Israeli border police firing toward the location where Nawareh was killed, and seconds later, a group of Palestinians carrying him towards an ambulance.

The officer commanding the Israeli forces who confiscated the recording material refused Zayed’s request to give him a receipt. The Israeli commander “Sabri” and border police returned to Zayed’s home at 8 a.m. on June 13 and asked again for the DVR equipment. “I said they’d already taken it, so they went around the entire neighborhood, the whole street, and took all the neighbors’ recording equipment too. They left nothing. I can’t record anything and neither can the others,” Zayed told Human Rights Watch.

Taken together, the military’s confiscation of equipment weeks after the killing and its refusal to provide receipts to owners, Israeli officials’ repeated public claims that video footage was doctored without providing any evidence, and military investigators’ alleged remarks while berating Zayed for recording the shootings, raise concerns that the military is not conducting a good faith investigation into the killings.

Another resident of the area interviewed separately, who asked that his name not be published out of fear for his security, told Human Rights Watch that Israeli forces called him at around 8 a.m. on June 13 and told him to open a shop he owns near Zayed’s building. He said:

There were a lot of soldiers and a few military vehicles. I opened the shop and they went in and took a computer and the DVR and told me they will return it to me, and then they left. The cameras are still there but they don’t work because they took the other equipment. They didn’t tell me what it was about or give me a receipt or invoice. They just grabbed the equipment, wrote something on it in Hebrew, took it, and moved on to the next neighbor – they were taking other people’s equipment too, saying they needed to check it.

“Israeli forces are threatening to treat Palestinians like criminals because they witnessed or recorded what appear to be war crimes committed by the Israeli military,” said Brad Parker, international advocacy officer and attorney at DCI-Palestine. “Instead of harassment and threats Israeli forces should focus on bringing to justice those responsible for killing two boys on May 15.”