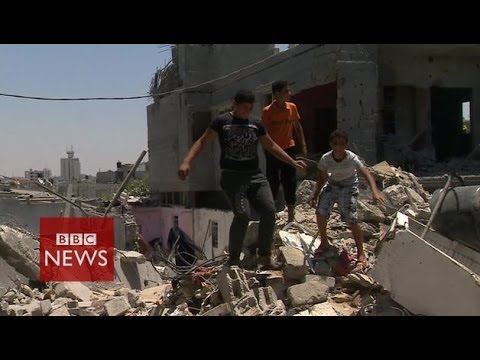 The government of Benjamin Netanyahu has launched a new war on Palestinians in Gaza, a war whose purported justifications make George W. Bush's excuses for his illegal invasion of Iraq smell nice by comparison. So far, the United States, Netanyahu's chief enabler, has been unwilling to stop the carnage, as it could easily do, because Washington hasn't yet heard enough complaint from Americans not to use their tax dollars to kill children in Gaza.

There is no plausible story that Netanyahu's war is a just war. As J.J. Goldberg recounts in the Jewish Daily Forward, the justification for Netanyahu's war on Gaza given by the chief spokesman of the Israeli military on July 8 was this: "We have been instructed by the political echelon to hit Hamas hard."

That is not a just war. There is no just goal offered that killing is supposed to bring about. Killing itself is the goal.

As Goldberg and Max Blumenthal note, the racist revenge frenzy in the Israeli political system to which Netanyahu's military escalation is purportedly responding was deliberately manufactured by Netanyahu himself.

As Goldberg recounts in the Forward [my emphasis]:

Once the [three kidnapped Israeli yeshiva] boys' disappearance was known, troops began a massive, 18-day search-and-rescue operation, entering thousands of homes, arresting and interrogating hundreds of individuals, racing against the clock. Only on July 1, after the boys' bodies were found, did the truth come out: The government had known almost from the beginning that the boys were dead. It maintained the fiction that it hoped to find them alive as a pretext to dismantle Hamas' West Bank operations.

The initial evidence was the recording of victim Gilad Shaer's desperate cellphone call to Moked 100, Israel's 911. When the tape reached the security services the next morning — neglected for hours by Moked 100 staff — the teen was heard whispering "They've kidnapped me" ("hatfu oti") followed by shouts of "Heads down," then gunfire, two groans, more shots, then singing in Arabic. That evening searchers found the kidnappers' abandoned, torched Hyundai, with eight bullet holes and the boys' DNA. There was no doubt.

Prime Minister Benjamin Netanyahu immediately placed a gag order on the deaths. Journalists who heard rumors were told the Shin Bet wanted the gag order to aid the search. For public consumption, the official word was that Israel was "acting on the assumption that they're alive." It was, simply put, a lie.

[Netanyahu's] rhetoric raised expectations that after demolishing Hamas in the West Bank he would proceed to Gaza. Hamas in Gaza began preparing for it. The Israeli right — settler leaders, hardliners in his own party — began demanding it.

Goldberg notes that before Netanyahu's revenge propaganda campaign and his violent crackdown on Hamas supporters in the West Bank, Hamas hadn't fired a single rocket from Gaza, and had largely suppressed fire by smaller jihadi groups. But, Goldberg says [again, my emphasis]:

The kidnapping and crackdown upset the balance. In Israel, grief and anger over the boys' disappearance grew steadily as the fabricated mystery stretched into a second and third week. Rallies and prayer meetings were held across the country and in Jewish communities around the world. The mothers were constantly on television. One addressed the United Nations in Geneva to plead for her son's return. Jews everywhere were in anguish over the unceasing threat of barbaric Arab terror plaguing Israel.

This, too, was misleading. The last seven years have been the most tranquil in Israel's history. Terror attacks are a fraction of the level during the nightmare intifada years — just six deaths in all of 2013. […]

When the bodies were finally found, Israelis' anger exploded into calls for revenge, street riots and, finally, murder.

In Gaza, leaders went underground. Rocket enforcement squads stopped functioning and jihadi rocket firing spiked. Terror squads began preparing to counterattack Israel through tunnels. One tunnel exploded on June 19 in an apparent work accident, killing five Hamas gunmen, convincing some in Gaza that the Israeli assault had begun while reinforcing Israeli fears that Hamas was plotting terror all along.

On June 29, an Israeli air attack on a rocket squad killed a Hamas operative. Hamas protested. The next day it unleashed a rocket barrage, its first since 2012. The cease-fire was over.

As Goldberg documented in the Forward, this crisis was manufactured by Netanyahu for political ends.

From the past, we know how this ends. It ends with a new ceasefire. The key question is how many human beings will be killed and injured in the meantime. President Obama should use all his levers to stop the killing now.

Robert Naiman is Policy Director at Just Foreign Policy. Naiman has worked as a policy analyst and researcher at the Center for Economic and Policy Research and Public Citizen's Global Trade Watch. He has masters degrees in economics and mathematics from the University of Illinois and has studied and worked in the Middle East. You can contact him here.