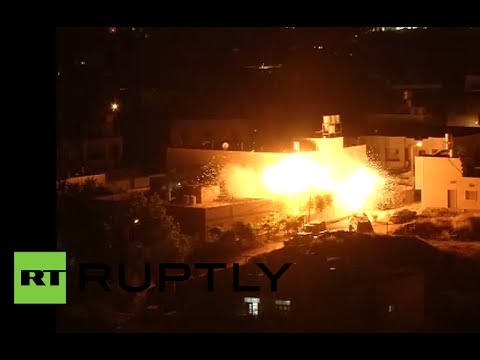 Ramallah – What does the occupied West Bank look like 47 years into the occupation? The Palestinian state was about to be announced but negotiations failed again. The two major political parties, Fatah and Hamas, declared they consent implicitly and explicitly, and agreed on a state within the June 4, 1967 borders.

On the other hand, a quick look at the situation suggests that the demand is a thing of the past, due to the major and continuous changes in the map of this state. It was all a result of the acceleration of the Israeli settlement process and the repeated incursions into areas supposedly controlled by the Ramallah authorities.

The scale of the disaster was made clear in a statement by Israeli Housing Minister Uri Ariel in early May 2014. He said that there will be no use for any negotiations about a Palestinian state. “In five years, there will be 550,000 or 600,000 Jews in Judea and Samaria [the West Bank] and not the current 400,000,” he explained.

This raises an important question: How did the story begin and how did it reach this situation despite the widespread popular uprising?

Through the Oslo Accords, Palestinian lands were carved up into three areas… Area C was the largest, with 61 percent of the land and remained under total Israeli control.
The percentages demonstrate that, since 1994, Palestinians were only given 18 percent of the West Bank’s total area to live on. However, from 2001 and Operation Defensive Shield in 2002 up to the disappearance of the three settlers this year, it became apparent that Palestinians do not even control the remaining crumbs they have in light of Israeli incursions into every inch of the territories.

A country without roads

This division was accompanied by planning a network of roads linking the Israeli settlements together. Palestinian villages and towns are isolated whenever one of those roads gets blocked for Palestinians. For example, there is a main road linking Bethlehem and Hebron, which reaches the settlements of Hebron and Beersheba, on one side, and Bethlehem and Jerusalem, on the other. Any closure of this road would lead to isolating Hebron from Bethlehem and Jerusalem, in addition to Ramallah and the north.

On the economic level, the Israeli road network dominates the daily lives and economy of almost 2.5 million Palestinians. The Palestinian National Authority (PNA), on the other hand, lacks sovereignty and power to open the roads.

Even when Palestinians are allowed to use these roads, they remain constrained by a number of obstacles and are pushed to seek alternative routes. The highways lack exits to Palestinian gatherings. Roads leading to Palestinian towns are full of gates and cement blocks. This is in addition to “on-the-fly” checkpoints and military orders banning them from using certain roads.

Another aim of designing the road network in this manner is the confiscation and annexation of water resources. The settlements receive two-thirds of the water in the West Bank and this was taken into consideration in the plans. Even the roads designated for Palestinians are currently confiscated for Israeli use. A single military jeep blocking one end of the road would extend a 10 or 20 minute journey into two or three hours.

Security depth and the future of the state

Despite statements by Israeli Prime Minister Benjamin Netanyahu about the idea of a unilateral withdrawal from the West Bank, in practice, the occupation cannot abandon the annexation of settlement clusters to its own territories. This includes Maale Adumim, Gush Etzion, Ariel, and Givat Zeev, in addition to Beit El and Kiryat Arba, which form a strategic bulwark due to their proximity to the territories occupied in 1948.

Netanyahu’s statements about relinquishing some of the settlements turned out to be only for media consumption. He only meant the small settlements, which lack any economic or security value. They are similar to the four settlements north of Gaza, which were evacuated during the occupation’s unilateral withdrawal from the Strip in 2005.

During and after the last round of negotiations, the Israeli government submitted several plans and proposals, approving the construction of around 13,581 new settlement units. This was implemented gradually, as usual. At the beginning, there was talk of 50 new units being built every day, reaching 1,540 per month. Finally, 4,793 units were planned outside the major clusters, which contain 73 percent of total units in the West Bank and Jerusalem.

The duplicity of Israeli policies towards the settlers is apparent. On the theoretical and public level, Netanyahu adopted the two-state solution in his famous speech in Bar-Ilan University on June 14, 2009. However, he quickly approved any step that would further plant the occupation’s feet in the occupied Palestinian territories.

Netanyahu’s plans coincided with the continuous calls by Israeli security forces to keep control of “strategic” locations in the heart of the West Bank. They include the hills overlooking central Israel and a large section of the Jordan Valley, extending from north of the Dead Sea and up to the city of Beisan.

If the US framework is implemented, only two thousand square kilometers of the West Bank will be under the control of Palestinians.
This incorporated the Ariel settlement cluster south of Nablus in the center of the West Bank, Gush Etzion between Bethlehem and Hebron to the south, and the settlements encircling Jerusalem from all sides. The security recommendations contradicted the agreement between Israel and the PNA, which called for keeping the West Bank and Gaza “as a single regional unit and not seeking to divide them.”

If the US framework is implemented, only two thousand square kilometers of the West Bank will be under the control of Palestinians, as 70 percent of settlement clusters will be annexed by Israel and some will be allowed self-rule. In addition, the Jordan Valley will be appropriated by the occupation.

Based on the above, the promised state becomes an illusion. The West Bank will remain, in practice, under direct occupation. The framework is in line with the settlement reality, which was imposed by Israel since 1967. The construction of settlements continues unabated.

On the other hand, US State Secretary John Kerry’s plan clearly stated that major settlement clusters in the West Bank inhabited by 80 percent of settlers will be annexed to Israel. The US, which sponsors the negotiations, keeps insisting on Israeli control of security in the areas of the settlements inside the future Palestinian state, as well as the network of roads linking them to Israel. The Israeli army will also have military bases inside PNA territories, to protect the settlers.

The dozens of settlement outposts will reduce the actual area of the Palestinian state and keep the restrictions currently imposed on freedom of movement of its citizens.

Occupied Jerusalem will not be the capital of the promised state. Recurrent leaks indicated that the perimeter of the capital will be set by the Israeli government, not the Palestinians. According to the Israeli definition, this does not merely include the western areas occupied in 1948 or even the eastern ones occupied in 1967, it will also encompass Palestinian towns around the city, like Shaafat, al-Isawiye, Abu Dis, and Beit Hanina. The biggest concession Israel can give is naming one of the surrounding towns as capital of the Palestinian state.

If Israel was to agree on East Jerusalem as the Palestinian capital, this would mean removing the settlement pockets encircling the old city from three sides, inhabited by around 2,000 Israelis. However, there is no news that those settlements are being discussed.

As for Jerusalem itself, four pockets of settlers control the old commercial sector of the city. This took place under the Hebron protocol of 1997, which stipulated the division of Hebron into two sectors, H1 and H2. The second sector is home to 30,000 Palestinians and 500 settlers in four settlements. But this city is another story.