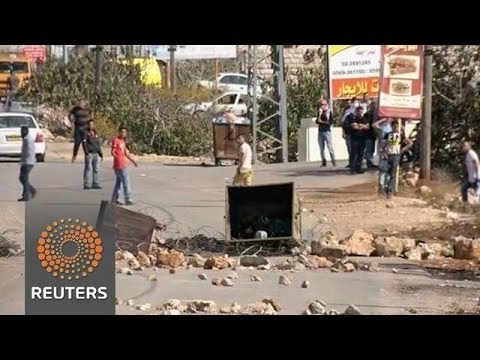 Orwa Abd al-Wahhab Hammad, 14, was shot multiple times with live bullets. He was taken to Palestine Medical Complex where he was pronounced dead.

An Israeli army spokeswoman said that soldiers fired at a Palestinian adult who was hurling a Molotov cocktail at forces in the area.

Witnesses said Hammad was hit by an Israeli sniper from close range, insisting the soldier shot to kill.

Orwa was a US national. His uncle was killed during the First Intifada.

7 hurt by Israeli fire in clashes near Ramallah

RAMALLAH (Ma’an) — Seven Palestinians, including a child, were shot with live bullets in clashes near Ofer detention camp in Beituniya west of Ramallah on Friday, onlookers said.

Israeli forces fired live bullets, tear gas, stun grenades, and rubber-coated steel bullets at the hundreds of protesters that were present at the scene.

Palestinians threw rocks at them, and seven were shot in different parts of their bodies.

An Israeli army spokeswoman did not immediately return calls.

The clashes came after Israeli forces shot and killed a Palestinian teenager near Ramallah.

The army said he was throwing a Molotov cocktail before they opened fire.

Reuters: “Palestinians clash with Israeli forces after boy’s death in the West Bank”