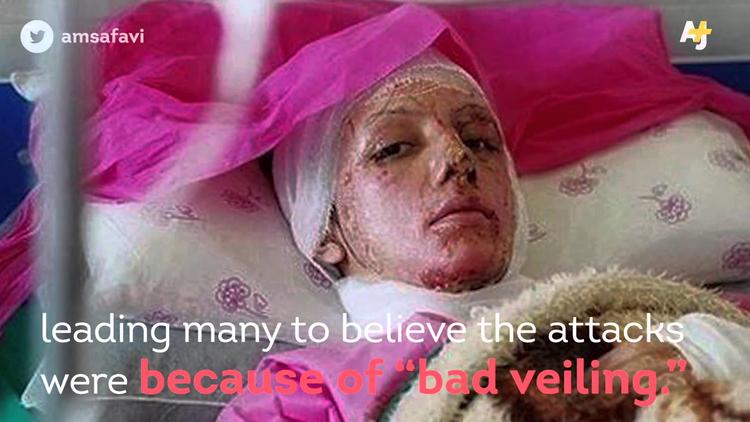 Iranian officials are moving to muzzle media coverage of a string of recent acid attacks targeting young women in the central city of Isfahan.

The attacks have sparked outrage and fear among many Iranians who last week took to the streets of Isfahan and Tehran to protest and call for government action.

Seven or eight women in Isfahan have had liquid acid thrown on them by men on motorcycles, according to Iran’s police chief, Esmail Ahmadi Moghadam. The attacks have left some of the victims badly burned, disfigured, and blind.

In recent days, several Iranian officials have warned the media over their coverage of the crimes, accusing them of fomenting public discord and promoting the “views of the enemy.”

Hard-liners are irked over reports linking the attacks to religious zealots who enforce Islamic norms in the country, including the Islamic hijab that became obligatory for women following the 1979 revolution.

They have also said that the attacks should not be linked to draft legislation that would offer protections for vigilantes, and have criticized the media for suggesting that women were targeted for not being sufficiently veiled.

The heads of Iran’s powerful judiciary, Ayatollah Sadedgh Amoli Larijani, said on October 26 that some media had committed an “injustice” against authorities by connecting the acid attacks to the enforcement of Islamic norms.

“Why should you pollute the atmosphere while a bill about the promotion of [Islamic] virtues and prevention of vice is [being discussed] in the parliament?” he asked.

“If Westerners provoke such an atmosphere, it’s because of their nature: They are anti-revolutionaries,” Larijani added. “But I’m sorry for some media that connected the attacks to the promotion of [Islamic] virtues.”

A day earlier, Tehran prosecutor Abbas Jafari Dolatabadi was quoted as saying that numerous media outlets had received warnings and that legal action could be taken against them.

Lawmaker Hasan Kamran said Iran’s Press Supervisory Board will look into the coverage of acid attacks by media that he says linked the attacks to hijabs worn loosely by women and those who promote Islamic norms.

Kamran, who is a member of the board, said associating the acid attacks with the issue of “badly veiled” women is against Iran’s national interests.

“These media outlets are sick. They make headlines out of false reports to make our enemies happy,” Kamran was quoted as saying by the hard-line Tasnim news agency.

The attacks have nothing to do with improper veiling, Kamran said, adding that one of the victims is from a “very respectable” family of war veterans.

Iranian opposition websites have reported that Arya Jafari, a photographer who covered an October 24 protest in Isfahan against the acid attacks, was arrested.

Jafari’s photographs of the large gathering were published by the semiofficial news agency ISNA, as well as by Western news agencies. They were also widely shared on social media.

Two days after the protest, authorities arrested women’s rights activist Mahdieh Golrou, who took part in an October 24 demonstration in Tehran. Activists said that at least two other female participants in the Tehran gathering in front of the parliament had received threatening phone calls over their actions.

Scrapping the bill that provides protections for religious zealots was among the demands of protesters both in Tehran and Isfahan.

Some Iranians officials have described the acid attacks as “suspicious” and suggested that foreign intelligence services could be behind them.

Authorities have said that the perpetrators of the attacks should be severely punished.

AJ+ “In Iran, Women Actually Have To Protest Acid Attacks”