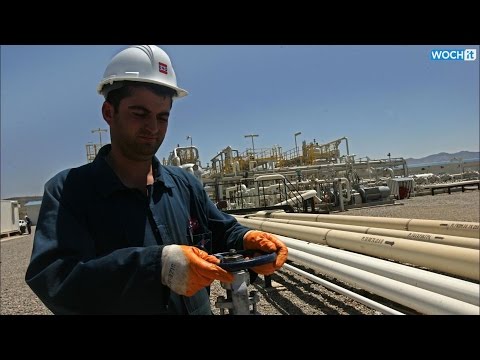 The Iraqi dinar: there might not be enough oil revenue coming into Iraq next year.

The high cost of fighting the extremist Islamic State group, the worldwide decrease in oil prices, corruption and a lack of sensible economic forward planning mean that Iraq may be on the verge of major economic disaster.

Over the past week or so the Iraqi government has been busy discussing the state of the country’s economy. After a number of meetings with his new Cabinet, Iraq’s Prime Minister Haider al-Abadi announced that his government would be adopting a set of austerity measures. But the salaries of civil servants and the military were safe, he added.

Despite this though, many local economists and business people fear that an economic downturn is coming. There are several major issues with Iraq’s economy right now. The most important of these include fluctuations in world oil prices, the high cost of the current security crisis and the Iraqi military’s fight against extremists –plus the fact that the previous government, headed by former Prime Minister Nouri al-Maliki, never managed to approve 2014’s national budget.

International organisations also seem concerned. Last week the International Monetary Fund, or IMF, predicted that Iraq’s economy would shrink by 2.75 percent in 2014 – its first contraction since 2003and the US-led invasion of the country that wreaked major economic havoc.

Global oil prices have been declining for several months now and have dropped to around US$80 a barrel for Brent crude. Because most of the country’s income is provided by oil sales and the oil industry, Iraq is obviously impacted by falls in price.

Another problem lies in the way that the previous Iraqi government estimated its national budget. To come up with estimated incoming revenues, financiers would subtract US$15 off the real price of each expected barrel to be produced and sold.

According to Akram al-Hiti, a lecturer at Baghdad University’s College of Engineering, specializing in the oil industry, that is a problem. Other oil producing countries estimate the price per barrel at far less than the actual price so that they can deal with any fluctuations in price, al-Hiti told NIQASH.

Over the past few days it was announced that for 2015, the budget estimates will be based on oil prices of US$80 per barrel. The 2013 budget and the un-ratified 2014 budget were based on prices of US$90 per barrel. In June this year, the actual price per barrel was around US$115. According to the IMF, Baghdad’s fiscal breakeven price in 2014 is $109.4 a barrel.

The other big problem for the oil industry is the fact that the extremist group known as the Islamic State, or IS, has taken control of parts of the country near to oil production areas and caused issues in other places like Kirkuk.  As the Washington Post reported recently, “the main oil-related casualty of the fighting has been the disruption of the Kirkuk-Ceyhan pipeline that runs through Turkey. This has been the target of repeated attacks and has been shut down since March”. Some estimates suggest that the country is losing US$1.2 billion per month because of this.

Another reason for Iraq’s current budget woes is the lack of serious economic planning. The national budget has been rising steadily and there are hardly any cash reserves.

In an interview with the Reuters news agency early in November Iraq’s Finance Minister Hoshyar Zebari said that the former Iraqi government had wasted billions on paying and arming irregular forces that make up the Shiite Muslim militias. These militias have played a key role in fighting the IS group, when the real Iraqi army has not been successful. But they have also been criticised for their sectarian policies.

“Part of the economic and financial problem we have is this expenditure on the popular committees, on the militias on the army, on the contracts,” Zebari told Reuters. “The key area where the budget was recklessly spent was on these military efforts without proper planning and on the volunteers. I think they are paying their salaries, their food, their clothes and weapons and so on. Over US$1 billion since June for the militias.”

Another reason as to why the Iraqi government has not made an announcement about spending on the security crisis is that it may not know what is being spent.

Under al-Maliki, Baghdad kept spending money – even though the national budget had not been passed in Parliament. Apparently around 65 percent of Iraq’s planned budget has already been spent, but this has been spent illegally, without any official oversight.

“The last government spent an estimated US$70 billion worth of oil revenues but it did so without fulfilling its own obligations and without clear documentation that could show the money’s paper trail,” says Anwar Saeed, a local economist.

There is no doubt that the whole country could soon be dealing with very serious economic problems that will affect locals for some time to come. Three provinces have already declared that they’re out of funds: Anbar, Karbala and Wasit. Others are expected to join them soon if the government doesn’t manage to pass the budget for 2015 and address the shortage of funds.