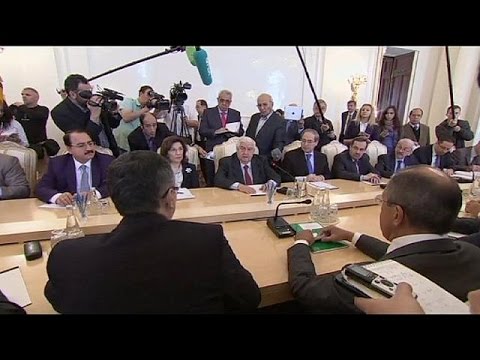 By Maysam Bizar | (Your Middle East) —

As the US-led campaign against the extremist ISIL militants in Iraq and Syria goes on, Iran, which has not taken part in the coalition, is gearing up for the Rouhani-proposed international conference ‘World Against Violence and Extremism’ (WAVE) on December 9-10 in Tehran. Maysam Bizar reports.

Referring to the ongoing crisis in the region and its consequences in other parts of the world, Mostafa Zahrani, Director of Iran’s Institute for Political and International Studies (IPIS), says: “Fighting violence and extremism in all its forms is a global issue which all countries are concerned about.”

He adds that Iran’s initiative against violence and extremism has been widely welcomed abroad and underlines that the conference is a means to find lasting solutions for that matter.

WITHOUT ANY reference to a secret letter the US President Barack Obama sent to Iran’s Supreme Leader Ayatollah Seyyed Ali Khamenei, Zahrani added that “as the anchor of stability in the region, many in the world have asked Iran for assistance (in fighting the ISIL) and want it to provide consultations on how to end the crisis which has claimed many lives.”

Tehran’s decision to hold the WAVE conference follows the Iranian President Hassan Rouhani’s proposal of the World against Violence and Extremism (a.k.a. WAVE) initiative in his address to the UN General Assembly in September 2013.

The UN General Assembly approved Rouhani’s WAVE proposal which called on all nations to denounce violence and extremism on December 18, 2013.

Experts say at a time when the rise of extremist groups like ISIL has turned into both a regional and global threat, heading such initiatives “will illustrate that it (Iran) can take a leading role in coping with the regional challenges facing it and its neighbors.”

“Iran is showing other world powers that they should finally look beyond the nuclear file and engage Iran on key issues of the region,” said Tabatabai.

OFFICIALS SAY the upcoming conference is modeled after the renowned Munich Security conference.

“Many senior officials, including foreign ministers from Afghanistan, Pakistan, Syria, Iraq and Nicaragua, parliamentarians and former officials along with experts and intellectuals from dozens of countries will attend the conference in Tehran,” the director general of the IPIS said.

Although no details have publicly been published about the key speakers or the participants at the event, President Rouhani is expected to deliver an opening speech and the final declaration of the gathering will be reported to the UN Secretary General Ban Ki-moon.

Maysam is a freelance journalist and translator based in Tehran, Iran.

Euronews: “Syria and Iraq FMs in Tehran for ‘anti-terrorism’ conference”