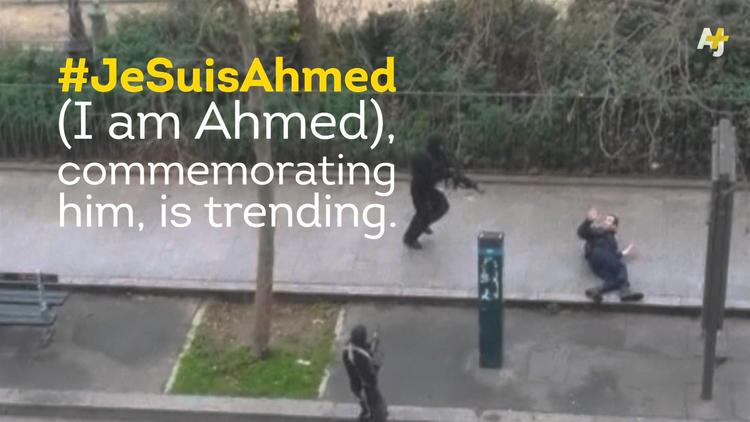 Media in the Muslim world have published a wide variety of reactions to the deadly attack on the offices of the satirical magazine Charlie Hebdo in Paris.

In Iran, the morning papers offered very diverse coverage of the event. Although overall coverage was low-key compared to Western media, some newspapers covered the attack on their front pages.

It was noticeable that both conservative and reformist outlets criticized Charlie Hebdo for publishing cartoons mocking the Prophet Muhammad and questioned whether such cartoons constituted free speech.

The Iranian government's official newspaper — named Iran, and which reflects Iranian President Hassan Rohani's government policies — offered the most visible coverage, dedicating most of its front page to a large photo of the event, with the headline: Bloody Show Of Terrorists In Paris.

Although the more independent and reformist-leaning newspapers such as Sharq and Etemad also carried the story on their front page, the space dedicated to the news was much less than that of the daily Iran or of Hamshahri, the official newspaper of Tehran's municipality.

Sharq's headline on the event, which was run at the bottom of its front page, read: Shooting At The Heart Of Europe.

Sharq slammed the French satirical magazine for publishing Muhammad cartoons. "It is not acceptable that the president of France defends the freedom of speech in his speech after the attacks," wrote Sharq. "This popular journal had published an insulting illustration of the Prophet of Islam." The daily suggested that "revising relations with moderate Islamic countries such as Iran, which are pursuing confrontation with extremism [like that of] [the Islamic State group] under the name of Islam, can lead to mutual understanding and to the elimination of the atmosphere of violence."

Meanwhile, some of the more conservative newspapers tried to put the blame on what they called France's policies in the Middle East. Javan, said to be close to the Islamic Revolutionary Guards Corps (IRGC), said in an editorial titled Cartoon Of Islamophobia In France that "France is among the countries that have had the largest dispatch of terrorists to Syria…and one can guess how dangerous the return of these terrorists could be for Europe."

The conservative daily Resalat said that the attack was a result of support for anti-Islamic media and other groups.

"Boosting the activities of extremist and anti-Islam groups and media (of which Charlie Hebdo was one) has led to the current security disaster in Europe," the outlet argued in an editorial. Resalat went on to say that "France has experienced the bitter taste of supporting terrorism."

The conservative newspaper Kayhan, which operates under the supervision of the office of the supreme leader, Ayatollah Ali Khamenei, was relatively mute in its coverage.

In Iraq, the mainstream media paid very limited attention to the attack. Only three major Iraqi news outlets published news reports about the events, two of which were stories syndicated from major Western wire services. The third story, by Al-Sabah al-Jadid, carried statements condemning the attack by world leaders, including U.S. President Barack Obama and British Prime Minister David Cameron. The newspaper also noted reactions from the Al-Azhar University in Cairo saying that Islam was against violence.

Paris-based Iraqi journalist Jawad Bishara told Radio Free Iraq's Samira Ali Mendi on January 8 that the "Iraqi media have been largely indifferent because many more Iraqis are killed on a daily basis, and the outside world barely responds."

While many Afghan media were on their weekend holiday, the Afghan Taliban took the opportunity to publish an article on its website on January 8 describing the killings as "an alarm bell for those who have in the past insulted Islam and the Prophet."

The Taliban did not go so far as to openly support the attack. The article, written by one Ahmad Zarif, who is not an official spokesman for the Afghan Taliban, opined that, "Those who mocked the Prophet have strengthened their security."

In an editorial published on January 9, the English-language daily Dawn noted: "Once again, Islam and Muslims are in the spotlight, and once again, it is for all the wrong reasons.

The newspaper described as "fitting" that Cairo's influential Al-Azhar University had "called the attack 'criminal' and reiterated that Islam denounces 'any violence,' while the Arab League has also condemned the massacre."

But Dawn added that "much more needs to be said and done, particularly given the deep divisions that are springing up between Muslims and non-Muslims in the West."

The English-language Daily Times laid out various positions when it comes to the debate about free speech in the context of depictions of Islam and Muhammad.

"Muslims in particular need to revisit the Prophet’s (PBUH) response/example in the face of insult and provocation," it concludes, "to understand that those who wield the language of weapons actually lack a convincing argument and those who choose to combat them with the weapon of language will win out in the end."

The Turkish press has widely reported about the Paris massacre. In commentaries, too, the overall voice was one of condemnation, despair, and sorrow. But the tone and intensity varied to some extent.

The liberal daily HaberTurk's prominent columnist Rusen Cakir asked: "How can we face this barbarism?" He then quoted a secular journalist as saying, "If, like five years ago, we had an AKP government of that time that the West would value and this government would oppose this kind of barbarism, there could be a way out of this. But such a situation does not seem to be the case now and that is why we are in a catastrophic situation."

Religious-minded, pro-government newspapers were also critical of the Paris violence. Writing in the daily Milli Gazete, columnist Ali Bayramogly said, "The first thing to do is now to condemn it. But the main issue is to fight it and not let it derail to policies of relying purely on military solutions."

Reactions to the shooting in the Arab world have been mixed, with some outlets condemning the attack and others suggesting that the French satirical magazine had brought the attack on itself. Other outlets blamed the West and "colonial policies" for the phenomenon of terrorism. Another common theme was whether the IS militant group was to blame for the attack.

The pan-Arabic newspaper Al-Hayat sharply condemned the Paris attack. Its headline declared that Terrorists Hit The Heart Of Paris in Cold Blood.

Egypt's Shorouk News cast the blame for the attack on Charlie Hebdo itself. The paper's headline read that the French satirical magazine had a History Of Insulting The Prophet, Ending In Fire.

Egyptian outlet Al Masry Al Youm reported comments by popular TV presenter Tamer Amin, who said that while some media reports have suggested that the IS group was behind the Paris shooting, "in my opinion, it was not IS that carried out this operation, but [IS] found an opportunity to say that it did in order to get a certain prestige." Amin said IS wanted to take advantage of the attack on Charlie Hebdo because the magazine had published caricatures of the Prophet Muhammad, so the attack would encourage some to say that IS had triumphed for Islam.

Egypt's Masr Alarabiya outlet pointed the finger of blame at IS, headlining with: IS Fulfills Its Threat And Attacks France. The headline is a reference to the November 2014 video released by the IS group that showed a group of French IS militants calling for French Muslims to carry out attacks on French soil.

In an editorial rich with flowery metaphors and titled He Who Cooks Poison Will Eat It Himself!, the Oman daily Al Watan exclaimed: "How painful it is that the world continues to drown in a sea of its own blood." The paper did not refer directly to the Charlie Hebdo attack but hinted at both it and the Islamic State group by blaming colonialism for violence and saying that "terrorism is not controlled by its master, but its loyalty is to the highest bidder."

In Central Asia there has been widespread coverage of the attacks, but media reactions mostly reflected the official responses condemning the tragedy and saying that terrorism is a global problem.

In Kazakhstan, several media outlets reported that around 30 Kazakh journalists had laid flowers outside the French Consulate in Almaty to honor the victims of the Paris attack. "It seems to me that this is a normal reaction from journalists — to support colleagues," the organizer of the flower-laying, Marzhan Elshibaeva, told the Tengrinews portal.

Kazakh media also reported widely on the official reaction of President Nursultan Nazarbaev to the Paris attack. In a telegram to his French counterpart Francois Hollande, Nazarbaev said that "the ubiquity of terrorism has become a threat for all nations," the BNews portal reported.

Beyond the official reactions, the Russian-language centrasia.ru regional aggregator website featured an open discussion of the Charlie Hebdo shootings that included a wide variety of opinions from commenters. Some accused Europe of hypocrisy for promoting free speech and allowing migration, and then cracking down on migrants. "This is a satanic manipulation," one commenter wrote. "The same centers that support this binge of free speech and which use slogans of tolerance and a war on xenophobia are importing millions of other faiths into Europe and now they are are starting to whip them — maybe they replied to that!"

Kazakhstan's New Times outlet linked the attack in Paris to the threat of blowback from Kazakh nationals fighting in Syria and Iraq. "The attack on Charlie Hebdo is a reason to think seriously and take measures to prevent terrorism and radicalism in Kazakhstan," the outlet wrote. New Times cited analyst Aydos Sarym as suggesting that the attackers in France "had managed to fight in Syria and had special training." Sarym noted that "there are more than 300 Kazakhs" fighting in Syria, saying that "our troubles are not fictitious or imaginary."

The Russian-language IslamNews.ru portal, which publishes news relating to Russian Muslims and the Muslim world, featured an opinion piece it solicited from Leonid Ivashov, the Kyrgyzstan-born vice president of the Academy on Geopolitical Affairs. Ivashov blamed the United States for the attack, saying that the Charlie Hebdo shootings were "most likely planned in the United States to destroy Islamic culture, Islamic tradition, and to pit Europeans against Islam." Ivashov said that the world is witnessing a "clash of civilizations" and that the Muhammad cartoons published by Charlie Hebdo were an excuse to incite fanatics.

In Azerbaijan, pro-government outlets featured Azerbaijani President Ilham Aliyev's official letter of condolence to his French counterpart, Francois Hollande. Aliyev said that Azerbaijan was "deeply outraged by this horrific event and strongly support a resolute struggle against all forms of terrorism."

Azerbaijan's APA news agency also noted that a book of condolences had been opened at the French Consulate in Azerbaijan and invited readers to visit and express their condolences.

Other pro-government outlets, such as the Trend.az portal, reported the reaction of Azerbaijan's ruling party, Yeni Azerbaijan, which condemned the Paris shooting attacks.