How do Muslims fit into the quilt of American history? Jonathan Curiel investigates this question in his new book, Islam in America (I.B. Tauris, April 28, 2015). “America’s first Muslims,” he writes, “were perceived as less than human – people put in chains, forced to do field work at gunpoint, required to take new names and a new religion. So much has changed in 400 years, even if the struggle for acceptance is an ongoing one.”

Jonathan Curiel is a former staff writer for The San Francisco Chronicle. His work has also appeared in The Wall Street Journal, The New York Times, The Christian Science Monitor, Salon, The Columbia Journalism Review, Los Angeles Times, and Tablet. He is the author of Al’ America: Travels Through America’s Arab and Islamic Roots (The New Press, 2008), which won an American Book Award in 2008.

Curiel’s new book is a readable and reliable history of the Muslim experience in America. It will help Americans to understand their Muslim neighbors and to celebrate the Abrahamic diversity of religious life in the United States.

Jonathan Curiel discusses his new book in this exclusive interview.

What is American Islam? Is it definable?

American Islam is easily defined and easily misunderstood. Upwards of 9 million Muslims live in the United States. More than 2,000 mosques dot the United States. Muslims have had a serious foothold in America for 400 years — first as slaves, when they were brought here against their will from West Africa; and then as immigrants in the 19th century, when they arrived on their own volition from the Middle East and Europe.

By 1900, when Alexander Russell Webb, a prominent white American, had converted to Islam and preached its values around the country, Islam was a viable religion in the United States. It was also a vilified religion, castigated by those who called it “Mohammedanism” or another name that implied its tenets and practitioners were less than desirable. This dual existence — an increasing presence accompanied by a semblance of prejudice — continues today.

How diverse is today’s Muslim community in the United States – ethnically, racially, ideologically, and demographically?

The United States has one of the world’s most diverse Muslim populations. Sunnis are a majority, but a sizable Shia community exists, along with a myriad of other affiliations that have strong membership bases. One mosque that I profile in my book, al-Farooq Masjid of Atlanta, has members from more than 30 nations — from Africa, Asia, Europe, and elsewhere — praying side by side with white, black, and Hispanic Muslims born throughout the United States.

Islam’s diversity in the United States offers an inspiring vision of the religion. When Malcolm X went on the hajj to Saudi Arabia in 1964, he was shocked to witness a similar diversity, and it prompted him to abandon his beliefs in the Nation of Islam for traditional Sunni Islam. He said he’d encountered Muslims “of all colors, from blue-eyed blonds to black-skinned Africans” who were “all participating in the same ritual, displaying a spirit of unity and brotherhood.”

You see this same spirit today, every day, in the United States, not just in Atlanta but in every metropolitan area. 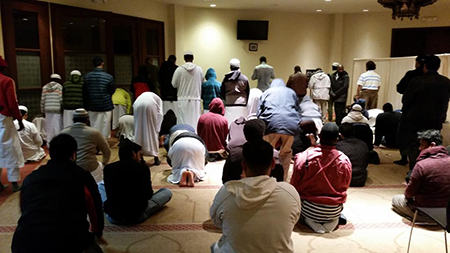 American Muslims also hold less extremist views than European Muslims, the report said. One example: In the United States, 8 percent of Muslims believe that suicide bombings are “often” or “sometimes” justified to defend Islam, compared to 16% in France and Spain, and 15% in Great Britain. A 2011 report by Pew reconfirmed its 2007 findings, and found that a majority of American Muslims had close friends who were non-Muslim, and a majority believed that American Muslims wanted to “adopt American customs and ways of life.” Fitting in, in other words, is important.

Why do you say that “American Islam is in a transition period”?

Despite the long history of Islam in America, Muslim integration into American society is a recent phenomenon. Only in the last 50 years did U.S. Muslims establish consequential political organizations. And only in 2007 did a Muslim office-seeker, Keith Ellison, win a seat in the United States Congress, the most important legislative body in the country.

The events of 9/11, and the subsequent wars in Afghanistan and the Middle East, catapulted Islam as a religion of debate in the United States, and prompted more public reflection from American Muslims than ever before. Islam and American Muslims were put under a spotlight. The transition that U.S. Muslims are making is a transition toward even greater integration into American society. Of the 535 members of Congress, only two are Muslim. That’s 0.37 percent — far lower than the percentage of Muslims in America. Muslim Americans want much more representation in the nation’s capital.

Can you on current divisions within the American Muslim community?

Ideological differences frequently divide American Muslims, with U.S. foreign policy being a major disruptor, particularly, lately on issues related to the Israeli-Palestinian conflict. Also, in a 2012 survey, the Council on American-Islamic Relations, the United States’ largest Muslim civil rights organization, found that Muslims were severely divided on whether the United States provided adequate support to Arab Spring organizers. In an earlier poll, CAIR found that foreign-born U.S. Muslims born were more likely than U.S.-born Muslims to believe the United States was at war with Islam.

The same ideological and religious divisions that exist in Muslim-majority countries also exist in the United States. And despite the level of acceptance and diversity of American Islam, ethnic boundaries persist. In 2008, the comedian Azhar Usman issued “An Apology” for the way immigrant Muslims had, for years, ostracized African-American Muslims.

How are converts changing the dynamics of American Islam?

Converts have been central to American Islam for more than a century. In the early 1900s, black Americans embraced the faith through preachings of African-American leaders who taught a separatist version of Islam. The Nation of Islam became the most prominent Muslim organization in America, with Malcolm X its most charismatic spokesman. But the Nation of Islam receded in prominence after 1975 when its new director, Warith Deen Mohammed, changed the organization’s name and its focus to Sunni Islam. Today, converts to Islam come from all ethnicities, with 90 Americans converting to the faith every day.

From 2006 to 2010, a convert from Christianity, Ingrid Mattson, led the Islamic Society of North America, the most influential Muslim group in the United States. Mattson changed the perception of Islam among non-Muslims, and she changed the way that ISNA operated by stressing interfaith partnerships and by speaking out against what she called the “misuse of Islam to justify injustice towards women.”

Do you think the Women’s Mosque of America will inspire Muslim women throughout the country to create separate spaces for themselves within their own religious communities?

Women’s Mosque of America: the first women’s-only mosque in the United States. Photo courtesy of Alexa Pilato (via RNS)

Yes and no. For more than a decade, Muslim women in the United States have advocated for improved conditions at mosques — for entrances that aren’t relegated to the side or back of a mosque, and for prayer spaces that aren’t relegated to basements and areas that have blocked views of the prayer service. Change has come gradually but not quickly enough, and the Women’s Mosque of America, which opened this year in Los Angeles, is the culmination of that movement to provide a freeing space within the parameters of traditional Islam. There is demand in other parts of the United States for similar spaces, but expansion will take time — and resources. And in the meantime, I think established mosques will make greater efforts to establish conditions that are more appealing to female mosque-goers. The Women’s Mosque of America has changed the conversation, and shown that it’s possible to offer an alternative prayer environment.

Is the establishment of Zaytuna College a hopeful sign for the future of Islam in America? Why does America need a Muslim college?

Located in Berkeley, California, Zaytuna is the first Muslim liberal arts college in the United States. It welcomed its first class in 2010, and I attended the college’s convocation that year, witnessing what one lecturer called “a historic and momentous occasion.” Hamza Yusuf and Zaid Shakir, acclaimed U.S. scholars and imams who’ve studied at Islam’s central institutions, founded Zaytuna College. The college is absolutely a hopeful sign. The school is educating a generation of Muslims in core religious subjects, like Islamic Law and Islamic Ethics, alongside core liberal arts subjects, like rhetoric and philosophy. Each student also takes a course on the history of America. The curriculum integrates this country’s past and present alongside Arabic classes. So Zaytuna’s graduates are grounded in the traditions of Islam and of the United States. Zaytuna’s first class included students who chose the school over Harvard and other Ivy League universities. The demand for Zaytuna was there even when Zaytuna wasn’t.

The U.S. Supreme Court unanimously ruled in favor of a Muslim inmate in Holt v. Hobbs (2015). Is this a step forward in the full recognition of religious rights for American Muslims?

In the United States, Muslim prisoners number about 350,000 — or about 15 percent of the total prison population. Many of those incarcerated are African-American converts to Islam. Muslim prisoners’ ability to practice their faith is frequently curtailed. One example: Trained imams are prohibited from entering many prisons to lead prayer services. Gregory Holt, a Muslim inmate in Arkansas, wanted to grow a half-inch beard in accordance with his religious beliefs, but Arkansas Department of Corrections officials refused his request. Holt, also known as Abdul Maalik Muhammad, said the policy violated the Religious Land Use and Institutionalized Persons Act, and the Supreme Court — in the case of Holt vs. Hobbs — agreed. The Court’s ruling was important, but I think it’s premature to say it will lead to full recognition of Muslim prisoners’ religious rights. In his foreword to Islam in America, the scholar Malise Ruthven, who’s the series editor of I.B. Tauris’ “Islam in . . .” books, touches on the issue of Islam in U.S. prisons. The issue is an important one that, unfortunately, is often ignored in conversations about American Islam.

How have American Muslims embraced interfaith efforts and other community-based activities to connect with their fellow citizens?

Interfaith efforts are one of the new hallmarks of American Islam — and a hallmark that separates American Muslims from Muslim communities in other countries. The first waves of Muslim immigrants in the United States were very insular. And the first incarnations of U.S. Muslim organizations, in the 1950s, ‘60s and ‘70s, were also very insular. As the organizations evolved, and U.S.-born generations joined, they began reaching out to other religious organizations. But it was the attacks of 9/11 that really prompted American Muslims into widespread interfaith work. For the first time on a wide scale, national and local Muslim organizations actively sought out leaders from Jewish, Christian, Buddhist, and other faith groups, and for the first time, other faith leaders were equally adamant about connecting with Muslim organizations. You see this work in groups like Muslims and Jews Inspiring Change, which works at the high school level, and in books like Sharing the Well: A Resource Guide for Jewish Muslim Engagement, which was co-produced by the Islamic Society of North America, the Jewish Theological Seminary, and the Hartford Seminary. America is often heralded as a “melting pot,” and the interfaith work that U.S. Muslims are doing is helping to redefine that melting pot.