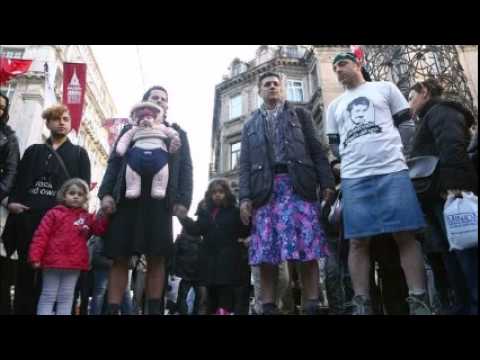 “I would walk around in Taksim wearing a skirt, if you can do that…”

For many Turkish men, this is a common phrase they use when they want to assert a claim or make a bet. It has turned into reality when a group of men went to Istanbul’s iconic Taksim Square wearing skirts, keeping their word they have been pledging for the past few days on social media.

On Feb. 17, Erkan Doğan had donned a skirt in Istanbul’s Asian side neighborhood of Kadıköy to demonstrate in memory of slain 20-year-old student Özgecan Aslan.

Doğan’s individual action had inspired social media calls for a massive “skirt-wearing” march over the weekend to show Turkish men’s support for the women who were victimized by the recent wave of male violence in Turkey.

The burned body of Özgecan Aslan was discovered on Feb. 13 in a riverbed in the southern Turkish province of Mersin, triggering a public debate in which a woman’s attire had also stressed as a factor in sexual assault and harassment cases by several conservative critics.

The record-breaking snowfall during the weekdays in Istanbul had lowered the expections for the participation in the planned “skirt march” in Taksim, but a group of men showed up in the square and İstiklal Avenue that connects it to the Galata neighborhood on Feb. 21. Some of them came with their children.” – MadeInTurkey