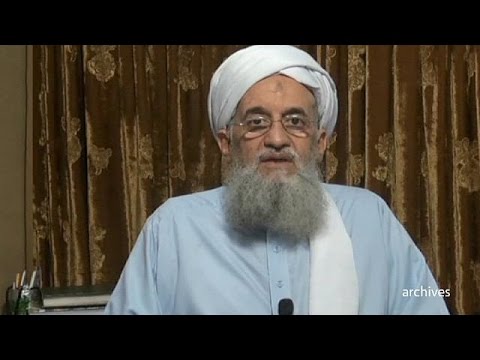 After almost a year of silence, Al-Qaeda leader Ayman al-Zawahri has released an audio message swearing bay'ah — an oath of allegiance — to Mullah Akhtar Mohammad Mansur, the new leader of the Taliban.

Zawahri's message is in many ways another response to, and nullification of, the Islamic State (IS) militant group and its claims to have established a "caliphate" in the lands under its control in Iraq and Syria.

In declaring such a "caliphate" in June 2014, IS leader and Zawahri's archrival Abu Bakr al-Baghdadi confirmed his rejection of Al-Qaeda's authority — and threatened Al-Qaeda's dominance of the global jihad movement.

But in his bay'ah to Mullah Mansur, Zawahri does not mention Baghdadi, IS, or its "caliphate" at all.

And he refers to Mansur as "Amir al-Mu'amin," the leader of the faithful — the same honorific that has been adopted by Baghdadi.

The Al-Qaeda chief vows that Al-Qaeda will help the Taliban in its struggle to establish a "caliphate" according to certain criteria.

"We pledge allegiance to you to establish the Islamic caliphate that rises on the choice and preference of the Muslims, with the spreading of justice and consultation, realizing security, removing injustice and restoring rights, while raising the banner of jihad," Zawahri says, implying not only that the IS-declared "caliphate" has not fulfilled these criteria, but that it does not even exist.

And if there is no "caliphate" in existence, then Baghdadi can hardly be the "caliph."

The Al-Qaeda chief describes his pledge of allegiance to Mansur as a continuation of the "path of jihad" of Al-Qaeda's "just leaders," including Al-Qaeda in Iraq founder Abu Mus'ab al-Zarqawi and — notably, since he led the Islamic State of Iraq (ISI), the forerunner of IS — his successor, Abu Hamza al-Muhajir (Abu Ayyub al-Masri). Baghdadi, who Zawahri considers to have departed from the Al-Qaeda path, is not mentioned.

Zawahri goes on to vow that he will continue waging jihad until all Muslim lands, "from Kashgur [a predominantly Muslim Uyghur city in China] to Andalusia, and from the Caucasus to Somalia and Central Africa, and from Kashmir to Al-Quds (Jerusalem), and from the Philippines to Kabul and from Bakhara to Samarkand" are liberated. IS has made similar claims, and has even declared a "province" in the Caucasus, though in reality it does not control any territory there.

Zawahri's pledge of allegiance to Mullah Mansur could lend the new Taliban leader — who has faced opposition from within the movement, including from his predecessor's family — greater credibility, according to one Afghan intelligence official.

But how much will the Al-Qaeda leader's support help Mansur?

"Zawahri’s bay’ah will give some legitimacy to Mansur but not a lot," says Tore Hamming, an analyst on militant Islam at the Copenhagen-based MENA Analysis group.

While some will see Al-Qaeda support as an indication that they should stick with the Taliban instead of shifting allegiance, for example to IS, Zawahri's bay’ah will also make it harder for opposing voices within the Taliban's Shura Council to pressure Mansur as he has been assessed and found to be the right leader by Al-Qaeda, Hamming told RFE/RL.

While it may be good news for Mullah Mansur, Zawahri's bay'ah and declaration that the new Taliban chief is the "leader of the faithful" may not be such a positive move for Al-Qaeda.

The pledge is not the first time that the Al-Qaeda leadership has emphasized its allegiance with the Taliban to criticize and invalidate IS and Baghdadi's appointment of himself as "caliph." Last summer, Al-Qaeda republished an old recording of a pledge of allegiance by the group's former leader, Osama bin Laden, to Mullah Omar, suggesting that Baghdadi broke away from Al-Qaeda and his pledge to the Taliban.

But Zawahri's decision to pledge allegiance to Mullah Omar's successor was, at least in part, a decision likely borne out of lack of choice, amid its ongoing rivalry with IS and with Al-Qaeda's need to prove that Zawahri — unlike Mullah Omar — is still alive.

"Zawahri simply does not believe he or Al-Qaeda have sufficient legitimacy and a sufficiently strong power or support base at the moment" to make any other decision, says Hamming.

The Al-Qaeda leader's only other choice would have been to pledge allegiance to his rival, Baghdadi, something that Zawahri would have found unthinkable.

One major difficulty for Zawahri in pledging to Mansur is the recent — and highly damaging — revelation that the Taliban lied about Mullah Omar's death for two years, even issuing statements in his name.

Beyond that, Mansur is not seen as a figure with particularly strong jihadi credentials, analysts say.

"An additional problem for Zawahri in pledging allegiance to Mullah Mansur is that Mansur has never presented himself as more than a politician," says Richard Barrett, senior vice president of The Soufan Group. "Unlike Mullah Omar, he has not wrapped the Prophet’s cloak around his shoulders or fiercely insisted on the Islamic mission of the Taliban."

The claim by Mansur and Zawahri that the new Taliban leader is the "leader of the faithful" relies on Mullah Omar's credibility in that role rather than his own, Barrett told RFE/RL.

Zawahri's pledge to Mansur could be another boon for IS, however.

Soon after the audio recording of Zawahri's bay'ah was released, online IS supporters moved to mock it, saying that the Al-Qaeda leader had effectively pledged bay'ah to the Pakistani intelligence service.

IS has already been given a "gift" in the form of the sudden revelation in late July that the Taliban had covered up Mullah Omar's death for two years, analyst J.M. Berger told Business Insider.

Unsurprisingly, Zawahri did not refer directly to the reports that Mullah Omar died in 2013 in Karachi, which — as the Long War Journal's Thomas Jocelyn pointed out — would mean that Al-Qaeda reaffirmed its loyalty to a corpse last July.

The Al-Qaeda chief simply called Mullah Omar's death "our loss and the loss of the Muslim Ummah, the mujahedin (jihadi fighters), muhajireen (foreign jihadi fighters), and murabiteen (the sentinels)."

The extent to which Zawahri's bay'ah will give IS a further boost over Al-Qaeda — which senior jihadi ideologues say is on the verge of collapse as an idea and an organization — remains to be seen.

Mansur accepted Zawahri's pledge in a statement published on the Taliban's English-language website on August 14.

But other key figures, including some of IS's most fiercest critics — Abu Muhammad al-Maqdisi, Al-Qaeda's intellectual godfather, and Sheikh Abu Qatada al-Filistini, who has referred to IS as a "mafia group" — have yet to react.