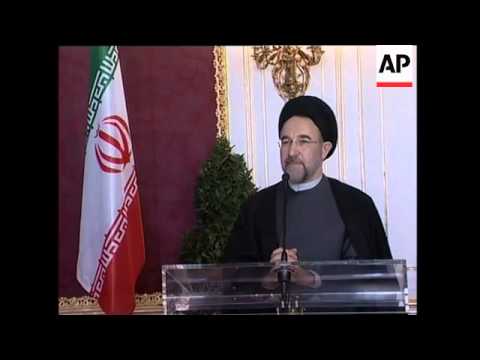 OXFORD (IPS) – When negotiations between Iran and the European “Troika” broke down, the reformist government of Mohammad Khatami was discredited in the eyes of the Iranian electorate which had seen the futility of negotiating with the West.

Despite Iran’s support for the U.S. invasion of Afghanistan and its help in persuading the Northern Alliance leaders in Afghanistan to join talks in Bonn, Iran was rewarded with U.S. President George Bush’s ‘Axis of Evil’ speech.

Right-wing candidate Mahmud Ahmadinezhad won the 2005 presidential election, with the massive support of hardliners, including the paramilitary Basij forces and some sections of the Revolution Guards. His new government was dubbed “the government of the barracks” because it included many former and serving Revolution Guards officers and veterans of the Iran-Iraq war.

Having seen the futility of negotiations with the West, Ahmadinezhad resumed Iran’s nuclear programme. During a large, carefully staged and nationally televised celebration in Mashhad on Apr. 11, 2006, Ahmadinezhad announced that Iran had enriched uranium to 3.6 percent and proudly declared: “The nuclear fuel cycle at the laboratory level has been completed, and uranium with the desired enrichment for nuclear power plants was achieved … Iran has joined the nuclear countries of the world.”

After a great deal of pressure by the West, on Feb. 4, 2006, the Board of Governors of the International Atomic Energy Agency (IAEA) voted to report Iran to the U.N. Security Council if it did not stop enrichment within a month. In response, Iran ended snap U.N. nuclear checks the following day.

In subsequent months and years, the Security Council passed eight resolutions demanding that Iran suspend all enrichment-related activities, and imposed some of the harshest sanctions ever imposed on a country. Iran declared all those resolutions illegal, maintaining that it had not violated any provisions of the Non-Proliferation Treaty (NPT). Instead of complying with those resolutions, Iran intensified its enrichment activities.

When Ahmadinezhad came to power, Iran had suspended all its nuclear activities. By the time he left office in 2013, Iran had installed more than 15,000 centrifuges, more than 9,000 of them being fed with UF6, as well as installing over 1,000 more advanced IR-2 centrifuges, despite all the sanctions that had been imposed.

After the West refused to provide Iran with uranium fuel of 20 percent purity required for the Tehran research reactor that is used for producing medical isotopes, Iran proceeded to produce enough uranium fuel of this purity. Altogether, Iran produced 15,651.4 kg of uranium enriched to 3.6, and 337.2 kg to 20 percent, some of which was used to produce fuel for the Tehran research reactor.

In 2004, the U.S. government came into possession of a laptop that contained a large number of documents purporting to be from an Iranian research program on nuclear weapons. It allegedly contained studies on high explosives testing for a nuclear detonation, and a uranium conversion system, all of which were purportedly done from 2001 through 2003.

From the start, there was uncertainty about how the documents had been obtained from Iran, if indeed they had originated in that country. While the material gave rise to a great deal of publicity in the media, the U.S. intelligence community remained sceptical about the document.

Without allowing either the IAEA or Iran to have access to the laptop, the United States called on IAEA Director-General Mohamed El Baradei to issue a report on the basis of the alleged document.

El Baradei passed the material to a team of experts who soon concluded that the material was fraudulent and in an interview with The Hindu on Oct. 1, 2009, El Baradei declared: “The IAEA is not making any judgment at all whether Iran even had weaponisation studies before because there is a major question of authenticity of the documents.”

A second alleged clandestine nuclear research project involved a “process flow chart” for a bench-scale system for conversion of uranium ore for enrichment. However, when Iranian officials were shown the flow chart, they immediately spotted multiple technical errors and these were so clear that the head of the IAEA Safeguards Department, Olli Heinonen, acknowledged in his 2008 briefing that the diagram had “technical inconsistencies.”

It has now been established, almost without a shadow of doubt, that both documents were forgeries, allegedly the work of Mossad, Israel’s intelligence service.

Meanwhile, as some Israeli leaders and their supporters in the United States were pushing for an invasion of Iran on the excuse of its nuclear programme, the U.S Intelligence Community (a federation of 17 separate intelligence agencies) assessed in a 2007 National Intelligence Estimate that Iran had ended all “nuclear weapon design and weaponisation work” in 2003.

Yet, instead of welcoming that positive report, the then Israeli Minister of Defence Ehud Barak said that it was a kick to the gut, and many neo-conservatives in the United States also dismissed its findings.

On May 17, 2010, in talks held in Tehran, the leaders of Iran, Turkey and Brazil announced a major breakthrough in Iran’s nuclear dispute with the West. In a joint declaration, they reported that Iran had agreed to send 1240 kg of its stockpile of low-enriched uranium to Turkey for safe keeping under IAEA supervision as part of a swap for nuclear fuel for a research reactor in Tehran, thus preventing any possibility of using it for any eventual bomb.

However, with indecent haste, a day after that important agreement, the then U.S. Secretary of State Hillary Clinton, testifying before the Senate Foreign Relations Committee, announced that a new package of sanctions against Iran had been approved by the major powers and would be sent to the U.N. Security Council later in the day, resulting in Resolution 1929 which imposed a fourth round of sanctions on Iran.

The move angered both Turkey and Brazil which thought that they had acted in keeping with U.S. President Barack Obama’s wishes to take most of Iran’s enriched uranium out of the country. In her statement to the U.N. Security Council meeting, the Brazilian envoy said: “As Brazil repeatedly stated, the Tehran Declaration adopted 17 May is a unique opportunity that should not be missed. It was approved by the highest levels of the Iranian leadership and endorsed by its Parliament.”

In an interview with the Brazilian press, El Baradei supported the Tehran Declaration and said that the deal “should be perceived as a first good confidence-building measure, a first effort by Iran to stretch its hand and say [they] are ready to negotiate”.

He also argued that “if you remove around half of the material that Iran has to Turkey, that is clearly a confidence-building measure regarding concerns about Iran’s future intentions. The material that will remain in Iran is under IAEA safeguards and seals. There is absolutely no imminent threat that Iran is going to develop the bomb tomorrow with the material that they have in Iran.”

In July 2009, Yukiya Amano was elected Director-General of the IAEA to succeed El Baradei. In November 2010, the Guardian published a diplomatic cable leaked by WikiLeaks originating a year earlier in Vienna by the then U.S. envoy to the IAEA Board of Governors Geoffrey Pyatt.

According to that cable, Amano said that he was “solidly in the U.S. court on every key strategic decision, from high-level personnel appointments to the handling of Iran’s alleged nuclear weapons programme.” Amano published the alleged contents of the laptop, which have been seized upon by the opponents of Iran’s nuclear programme as evidence of Iran’s military intentions.

Finally, in the June 2013 presidential election, tired by their isolation in the world and suffering under the weight of sanctions, Iranians elected Hassan Rouhani who had vowed to resolve the nuclear dispute with the West as their next president. Rouhani had been the chief nuclear negotiator under President Khatami who reached the nuclear deal with the European “Troika”.

Rouhani chose the former Iranian envoy to the United Nations, Mohammad Javad Zarif, who had also been involved in earlier negotiations, as Iran’s foreign minister and head of the Iranian negotiating team. After two years of talks with the P5+1 (China, France, Russia, United Kingdom, and United States; plus Germany), the agreement known as the Joint Comprehensive Plan of Action (JCPOA) was eventually reached.

Farhang Jahanpour is a former professor and dean of the Faculty of Foreign Languages at the University of Isfahan and a former Senior Research Fellow at Harvard University. He is a tutor in the Department of Continuing Education and a member of Kellogg College, University of Oxford.This is the fourth of a series of 10 articles in which Jahanpour looks at various aspects and implications of the framework agreement on Iran’s nuclear programme reached in July 2015 between Iran and the United States, United Kingdom, Russia, France, China and Germany, plus the European Union.