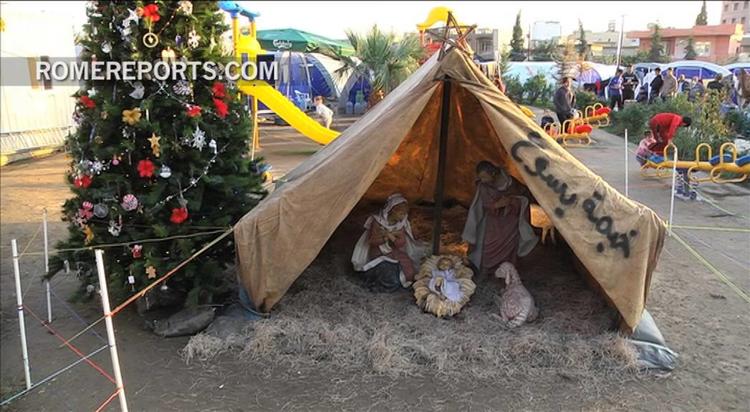 They have been harassed, threatened, have lost all their worldly goods and forced to flee. What, if anything, would make Mosul’s Christians want to return to the city they used to call home?

A celebration at an Orthodox church in Mosul in the early 20th Century: Syriac Christians lived in Mosul for centuries before extremists drove them out last year.

A celebration at an Orthodox church in Mosul in the early 20th Century: Syriac Christians lived in Mosul for centuries before extremists drove them out last year.

It is almost certain that, as a senior Christian cleric in Iraq, Patriarch Louis Sako, put it in an interview with news agency, AFP, “for the first time in the history of Iraq, Mosul is now empty of Christians”.

But what, if anything, would make Mosul’s Christians want to return to the city they used to call home?

Iraqi Christians have lived in Mosul for thousands of years. However after the 2003 US-led invasion of Iraq, numbers dwindled as they sought safety elsewhere. Maan Basim Ajaj, a former advisor on Christian and minority affairs to the governor of Ninawa, of which Mosul is the capital, estimates that before 2003, there were around 525,000 Christians in the province. About 125,000 lived in Mosul with the other 400,000 living around Ninawa. However after 2003, numbers decreased rapidly and by last year, only about 8,000 remained in Mosul with only around 125,000 staying elsewhere in the province, Ajaj estimates.

After the extremist group known as the Islamic State took over Mosul and its surrounds, almost all Christians fled, faced with no realistic alternatives for life there. Now if you ask those who fled under what conditions they might return – if ever – you tend to get the same answers from everyone.

The first condition is that there must be international protection for anybody returning. And the second is that the Christians be allowed to create their own semi-independent administrative entity.

In a March 2015 speech given to the United Nations Security Council, Sako asked that Christians and other minorities in the area be given international protection. Additionally he asked that the minorities be given a special protected area for themselves on the Ninawa Plain, an area where Christians, Yazidis and Shabak minorities have traditionally lived. And finally he asked that Christians be financially compensated for the property they had lost, so that if they did return to Mosul, they could take up their lives again without any hardship.

“The Christians of Iraq do not want foreign troops to come and deploy in the Ninawa Plain or near Mosul’s churches,” Anwar Hadaya, formerly the representative of Christians on the Ninawa provincial council and a senior member of the Christian political party, the Syriac Gathering Movement, explains the conditions further. “They want the United Nations to issue resolutions that oblige the federal government and the local government in Ninawa, as well as the government of Iraqi Kurdistan, to protect these areas and to keep them out of various different political conflicts, so that their people don’t become victims once again.”

Hadaya believes that there is a future for Iraq’s Christians here.

“If they are protected and if they are compensated, some Christians might decide to return after Ninawa is liberated from the Islamic State group,” Ajaj told NIQASH. But it won’t be easy and many may decide not to bother, Ajaj noted. “Most of them won’t return though – especially those who are living in stable situations and who have been living a free life in western countries. Even those people who fled to Iraqi Kurdistan are treated well and living in stable conditions.”

In other words, why come back. As Nasser Butros, a Christian businessman who has lost a poultry farm, a concrete factory and two industrial workshops in Mosul’s industrial east, says: “There is nothing that would convince us to return. We have lost everything. The IS group has confiscated all of our industrial and agricultural machines, or sold them. Even our furniture and clothes were sold in the market.”

“Which is why the Christians who do come back will also continue to feel bad when they’re dealing with their Arab neighbours in Mosul,” Ajaj explains. “Their property was looted and they were expelled from the city they love, where they had spent most of their lives – and none of these Arab neighbours did anything to rescue them.”

Those grim opinions are shared by many. There’s no trust anymore, says Abdallah Elia, a writer and poet in Erbil. “Iraq’s Christians have become aware that there are parties inside and outside Iraq who are trying to empty the country of Christians. And it seems those efforts are succeeding,” Elia notes.

Only a handful will return, predicts Amira Bat Shamouel, a Christian civil society activist who’s now in the US. “It is not possible to liberate the whole area from the IS group,” she explains. “Most of the group’s members are Iraqis and no one can liberate Iraq from them. They are not only in Mosul. They are part of an extremist Islamic agenda that attacks anyone who disagrees with it, such as the Yazidis. Or the Christians. This is a cycle and it will repeat itself.”

Even if Iraq’s remaining Christians did get to form their own version of an independent administrative region, it wouldn’t matter, says Shamoun Sami, a writer and a researcher in Erbil. Even if Iraq’s Christians were able to establish a safe zone on the Ninawa Plain, there still would not be enough of them to have any impact. There were fewer Christians than there were Shabaks and Yazidis here, even before the security crisis sparked by the Islamic State group last year, he argues. “And in any local elections in such a self-administered region, the Christians won’t ever get any senior positions,” Sami adds. “They will still be vulnerable to all kinds of dangers, not least political ones.”

Speaking to Christians who are now living in the relative safety of the semi-autonomous region of Iraqi Kurdistan, protected by the Iraqi Kurdish military, it seems they are all trying to make up their minds between some difficult choices. Some feel that they have strong bonds with their old homes in Ninawa, they consider it their ancestral homeland, and they want to preserve this important link by returning one day. Others are only looking westwards, citing their desire to protect the next generation and hoping to be able to immigrate to a safer country.

One thing is certain: Iraq’s Christians are confused and demoralised. They are emotionally attached to their land but they also know it will be very dangerous to return to it.

Rome Reports from last winter: “People of the Year 2014: Persecuted Christians in Iraq”