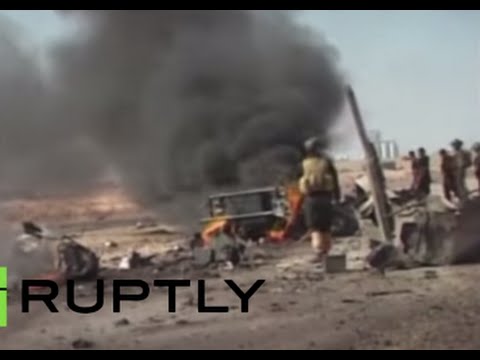 While [the so-called ‘Islamic State’ group] ruled Tikrit, many locals joined. When they were beaten there, fighters fled, leaving family members behind. Today those relatives are harassed and cannot even leave their homes.

Iraqi woman, Suniyad Mahmoud, lives in a small, mud house with only two rooms. The 52-year-old’s house is in a remote village, a long way west of the Iraqi city of Tikrit. And she lives here, 25 kilometres from the city centre, for a reason: Both of her sons are members of the extremist group known as the Islamic State [group].

Tikrit, in the province of Salahaddin, is a town populated mainly by Sunni Muslims. And the Islamic State, or IS, group base their ideology on their own version of Sunni Islam. Because of the situation in Iraq, where many local Sunnis felt sidelined and oppressed by a Shiite Muslim-led government, they believed that it would be better to live under, or join, the IS group than live under that government, headed at the time by Prime Minister Nouri al-Maliki.

“I was living with dignity under the Islamic State. And I hope those good days will come again.”

Mahmoud’s sons, Tawfiq and Nasser, were among those who felt that way. They swore allegiance to the IS group and went to fight for them in other parts of the province. Tawfiq died in the fighting and her other son is apparently still alive, either in the area of Hawija or in the city of Mosul – she doesn’t know where. And Mahmoud now lives in the mud hut with her widowed daughter-in-law and the couple’s three children.

Mahmoud says she left Tikrit when aerial bombing by the international coalition began and after her son was killed. She is living so far from the city deliberately, she told NIQASH because she is afraid that other locals, victims of the IS group, will take revenge on her because her sons joined the extremists. In fact, her house in the Jamiyah neighbourhood in Tikrit has been burned down – this happened after members of the Shiite Muslim militias fighting the IS group and the Iraqi army entered Tikrit earlier this year, when they took the city back.

“Now,” Mahmoud says, “we are living on the mercy of local people here.”

“This family is living in really miserable conditions,” says Naim Ali, an activist and member of a local humanitarian organisation that visited the village recently. “I couldn’t believe they were living like this – they beg for water and bread.”

Yet despite the conditions she is living in, Mahmoud still thinks highly of members of the IS group; she continues to describe them as revolutionaries. When NIQASH visited, she was feeding chickens in her yard. “I stayed in Tikrit for more than nine months under the rule of the IS group,” she told NIQASH. “I was living with dignity. And I hope those good days will come again,” she adds.

For the time being it seems that Mahmoud and her family are best off where they are: out of sight and out of town.

“Their presence is unacceptable,” Jamal al-Ilyawi, a tribal leader from the Albu Ali al-Jassim tribe and a member of the Sheikh’s Council of Salahaddin, told NIQASH. “We can no longer tolerate the presence of IS group families in Tikrit and in the areas surrounding the city. They killed our sons and our brothers, caused the city’s destruction and displaced the city’s people.”

“It was agreed that some of the relatives of members of the IS group would be allowed to return if they officially made pledges to their local tribes and to local security, saying they were innocent of any criminal acts,” al-Ilyawi then explained. “Despite that though, they will not be allowed to mix with others and they must continue to live in isolation.”

He says that members of the IS group in Tikrit and its surrounds can be classified into two main groups. The first is composed of those from places like Diyala, Mosul and south of Baghdad, who had not lived in Tikrit for their whole lives. The second is made up of people who are actually from Tikrit but, he noted, this group is much smaller.

“After the IS group took control of Tikrit, dozens of young men joined the organisation – and they had different reasons for doing so,” says Thaer al-Jibouri, a senior police officer in the city. “Some joined it because they wanted to take revenge on the security forces that had ruled the country for so long, they wanted to get revenge for those forces’ bad behaviour toward local people. Other young guys joined the group because they wanted to be leaders, they wanted power – that’s still a dream for many young men.”

Sabah’s family stayed and now they are all paying for a teenage boy’s decision.

After Iraqi military and militias forced the IS group to leave the city in April this year, al-Jibouri believes that almost all of the family members who were associated with the IS group left for the group’s remaining strongholds, like Mosul, Sharqat and Hawija.

“The ones who remained are really only allowed to stay in the city because relatives, who are either members of local security forces or of the militias, have guaranteed their good behaviour,” al-Jibouri says.

The ones who remained have been treated like outcasts here and most of the time they cannot even leave their own homes. They are afraid of what other locals will do.

For example, in Dhuluiya, over 100 kilometres from Tikrit, north of Baghdad, victims of the IS group didn’t just harass those who were associated with the IS group; they also firebombed three of those families’ houses. Nobody was killed though. Dhuluiya locals also publicly demanded that the families leave the area, staging two demonstrations, closing roads and writing graffiti on the families’ houses.

“I am in a living hell,” says another Tikrit man, a 44-year-old who didn’t want to give his name because his son, Sabah, ran away to join the IS group. “I am imprisoned in my own house, I don’t leave it. When I do, people insult me on the street,” he tells NIQASH.

Sabah wasn’t even 17 when he and three friends left the city to join an IS group battalion led by a Tikrit local, Nasser al-Amounah, a leading member of the extremist group. His father wasn’t able to contact him after this and says he has not heard from him since; he doesn’t even know if the boy is still alive.

Now Sabah’s father can’t even go to the market to buy food. If there are administrative tasks or if somebody gets sick, he sends his wife or her sister to the council or to the doctor.

“After all, if I believed in what he was doing, I would have left and taken my whole family when the IS group left the city,” he argues. But they stayed and now they are all paying for a teenage boy’s decision. “Today even my other children are hearing hurtful words. Other kids call them the “sons of the Islamic State” and “killers”. They won’t even play with them anymore.”