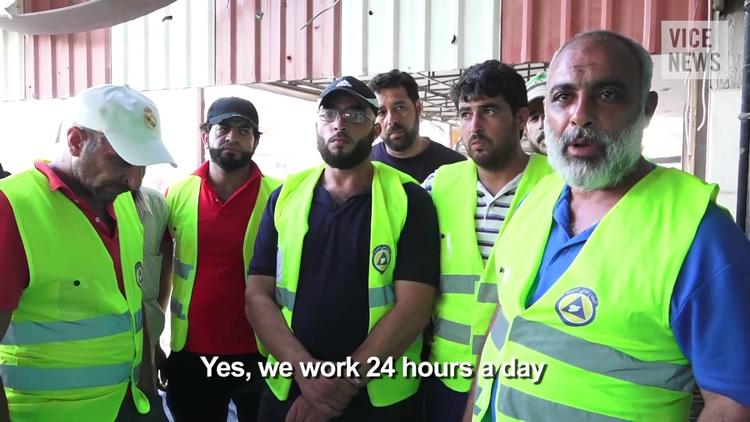 Syrian asylum-seekers are the largest component of the latest refugee surge to Europe. Germany has been extraordinarily generous in providing a refuge. But with four million refugees having fled Syria’s daily atrocities and more waiting in the wings, we must ask how to improve the conditions forcing their flight.

A coalition of Western and regional militaries is arrayed against the self-proclaimed Islamic State, or ISIS, and the UN Security Council has imposed sanctions on the al-Qaeda-affiliated Nusra Front. But there has been little concerted effort to stop the atrocities of President Bashar-al Assad’s government.

When the Geneva Conventions are followed, the main casualties in war are combatants—people who have joined the fighting. Much of what makes the Syrian war so ugly is that the Assad government is also attacking civilians who live in areas seized by the armed opposition. The aim of this war-crime strategy is to depopulate these regions and send a lesson to other Syrians that they will be attacked if the opposition takes their neighborhood.

Assad’s most devastating weapon in this anti-civilian campaign has been the “barrel bomb”—a canister filled with explosives and metal fragments. Barrel bombs are dropped unguided from helicopters just above antiaircraft range, hitting the ground with huge explosions.

In most wars, civilians can find a modicum of safety by moving away from the front lines. But Assad’s indiscriminate use of barrel bombs deep in opposition-held territory means that many have no place to hide. The international community could probably take no more effective step to curtail the refugee flow than to stop Assad’s barrel bombs.

The Syrian military has dropped sometimes dozens a day on opposition-held neighborhoods in Aleppo, Idlib, Dara’a and elsewhere. They have pulverized neighborhoods, annihilated markets, schools, hospitals and countless residences, and left broad swathes of death and destruction. Syrians have described to me the sheer terror of waiting for a barrel bomb to tumble to earth, not knowing until near the very end where its deadly point of impact will be.

Other weapons used indiscriminately kill also civilians, with various forces responsible, but Assad’s barrel bombs play a particularly big part in forcing millions of Syrians from their country. In most wars, civilians can find a modicum of safety by moving away from the front lines. But Assad’s indiscriminate use of barrel bombs deep in opposition-held territory means that many have no place to hide. The international community could probably take no more effective step to curtail the refugee flow than to stop Assad’s barrel bombs.

Yet little effort has been made. The two governments with the greatest potential to influence Assad—his principal backers, Russia and Iran—refuse to get him to stop and supply him with weapons. Western governments have been reluctant to exert strong public pressure, let alone sanctions, because of other priorities—Ukraine, in the case of Russia, and the nuclear deal, in the case of Iran. Even now, as Russia deploys its own military forces in Syria, Washington is pressing Moscow to coordinate with America’s anti-ISIS operation but isn’t mentioning the barrel bombs. As for the European Union, it talks about tackling the “root causes” of migration to Europe but has done little to address the atrocities that lead Syrians to flee.

In February 2014, the UN Security Council demanded an end to the “indiscriminate employment of weapons in populated areas…such as the use of barrel bombs,” but it has done nothing more to stop it. Western governments led by France are proposing a new Security Council resolution to have the UN monitor indiscriminate attacks, particularly barrel bombs, and possibly impose sanctions if the attacks continue. But Russia, doubling down on its support for a murderous regime, is threatening to veto the resolution, even though it condemns indiscriminate attacks by all sides.

The West should make a veto as painful as possible by introducing the resolution when President Vladimir Putin is in New York later this month to address the UN General Assembly. Despite his bluster, Putin would not want to be seen as indifferent to indiscriminate killing of Syrian civilians.

If Russia does block further Security Council action, Western nations, including Germany, should inflict a price, including by holding off any new arms dealings with Moscow. Western nations should also continue to support credible efforts to collect evidence of atrocities by Syria and complicity by its supporters. If Russia persists in blocking International Criminal Court jurisdiction for war-crimes charges, other avenues for justice should be pursued.

Indeed, far from facilitating the fight against extremist groups, Assad’s disregard for civilian life is one of their best recruitment tools.

One reason the West hasn’t intensified the pressure to stop barrel-bomb attacks is fear that it might weaken the Syrian government, facilitating an Islamic State takeover. But barrel bombs are so imprecise that the Syrian military rarely drops them near the front lines for fear of hitting its own troops. They are used mainly to pummel civilian neighborhoods.

Indeed, far from facilitating the fight against extremist groups, Assad’s disregard for civilian life is one of their best recruitment tools. The Islamic State and the Nusra Front recruit Syrians by presenting themselves as forces that counter the Assad government’s atrocities.

Moreover, we should not confuse the Assad government with the Syrian state. As we have seen in Iraq and Libya, a functioning state is necessary to prevent the chaos in which extremists thrive, let alone to protect basic rights. But a change of leadership—whether through negotiation or criminal prosecution—need not mean destroying the Syrian state.

Some say that, rather than targeting a particularly monstrous weapons system, the best way to end the barrel bombs is to make peace. That is a laudable goal, but few believe a negotiated solution is anywhere near. In the meantime, virtually all the Syrians I have spoken with agree that stopping Assad’s barrel bombs is now the most urgent task to reduce their suffering—and the flow of refugees.