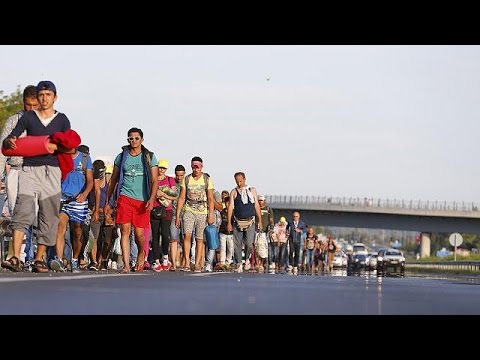 Thousands of exhausted refugees and asylum seekers received a hero’s welcome Sunday (6 September) as they streamed into Western Europe. But Austria warned the emergency measures are only “temporary” as the EU struggles to establish a united response to the crisis.

As they stepped off trains in Munich, many clutching young children, the newcomers were met by crowds of cheering well-wishers holding balloons, who handed them food, water and toys.

Dismounting from one train, two boys, perhaps seven or eight years old, pushed out their chests like football stars and beamed smiles as they traversed the throng of applauding people. “The people here treat us so well, they treat us like real human beings, not like in Syria,” said Mohammad, 32, from the devastated town of Qusayr, his eyes welling up with tears.

Onlookers clapped and chanted: “Say it loud, say it clear, refugees are welcome here,” as volunteers loaded their vehicles with food, water and soft toys.

However, the EU is deeply divided over how to cope with the influx of people from the Middle East, Africa and Asia, making the 28 nation bloc look ineffective and heartless as member states blame each other, fuelling political populism and anti-Muslim sentiment.

Germany has said it expects 800,000 refugees and migrants this year and urged other EU members to open their doors. But others say the focus should be on tackling the violence in the Middle East that has caused them to flee their homes.

“When rich Europe argues and tears itself apart over whether to accept 1000, 10,000, 42,000 or 100,000 refugees, when Turkey already has 2 million, it is clear that we have a problem of perspective and identity,” EU foreign policy chief Federica Mogherini told Italy’s Corriere della Sera.

“This crisis can help us come out with a stronger vision of what it means to be the European Union.”

Austria and Germany have thrown open their borders to the wave of refugees making their way north and west from the Middle East, Africa and elsewhere. Hungary has been letting the human tide move on after holding it up for days.

A total of 6,800 entered Germany on Saturday (5 September) with another 5,000 expected on Sunday (6 September), Bavarian state officials said.

German Chancellor Angela Merkel’s decision to allow the influx caused a rift in her conservative bloc on Sunday, with her Bavarian allies accusing her of having pushed forward without asking the federal states dealing with the influx.

The numbers in Europe are small compared to several million refugees in Syria’s neighbours Lebanon, Turkey and Jordan, and Pope Francis called on Sunday for every European parish and religious community to take in one migrant family each.

But a poll in French newspaper Aujourd’hui en France showed 55% of those surveyed opposed to softening rules on granting refugee status.

French far-right leader Marine Le Pen accused Germany on Sunday of looking to lower wages and hire “slaves” by opening its doors to thousands of migrants and refugees.

In Hungary, migrants freely boarded trains at Keleti station in Budapest, following handwritten signs in Arabic directing people to trains to Hegyeshalom on the border with Austria. Volunteers handed out food and clothing to hundreds of people at the station.

Austrian police said the flow of people crossing the border from Hungary slowed on Sunday. More than 10,000 have left Hungary since the border was opened on Saturday after thousands spent days camping outside the station amid confrontations with police and chaotic handling by authorities.

But Chancellor Werner Faymann on Sunday said the “temporary” relaxation of border rules would have to end, and that “a measure of this type cannot be a solution” to the migrant crisis.

Hungary deployed more than 100 buses overnight on Saturday to take the migrants, who had arrived through the Balkans from Greece, to Austria which said it had agreed with Germany to allow access, waiving asylum rules requiring refugees to register in the first EU country they reach.

Wrapped in blankets and sleeping bags, long lines of people, many carrying sleeping children, got off buses on the Hungarian side of the border and walked through the rain into Austria.

“We’re happy. We’ll go to Germany,” said a Syrian man who gave his name as Mohammed; Europe’s biggest and most affluent economy was the favoured destination of most.

But on Hungary’s border with Serbia there were reports that refugees had spent the night in the rain without food or shelter.

Hungary, the main entry point into Europe’s borderless Schengen zone for migrants, has taken a hard line, vowing to seal its southern frontier with a new, high fence by Sept. 15.

Hungarian officials have portrayed the crisis as a defence of Europe’s prosperity, identity and “Christian values” against an influx of mainly Muslim migrants.

German Interior Ministry spokesman Harald Neymanns said Berlin’s decision to open its borders to Syrians was an exceptional case for humanitarian reasons. He said Europe’s so-called Dublin rules, which require people to apply for asylum in the first EU country they enter, had not been suspended.

At an EU foreign ministers’ meeting in Luxembourg on Saturday, the usual diplomatic conviviality unravelled as they failed to agree on any practical steps out of the crisis. Ministers are especially at odds over proposals for country-by-country quotas to take in asylum seekers.

The 28 nation EU has struggled to build a coordinated response to deal with the flood of people at its borders, and on Sunday UN refugee chief Antonio Guterres criticised the huge disparity in members’ responses.

“The European asylum system is deeply dysfunctional, it works badly. Some countries make the necessary effort, and the effort of many others is nearly non-existent,” he told French broadcasters.

But he sad the situation could be tackled “if everyone agrees on a joint action plan,” calling for unity days before European Commission President Jean-Claude Juncker is set to unveil a plan to relocate 120,000 refugees from Italy, Greece and Hungary.

Germany’s Welt am Sonntag said the EU plan, expected to be released on Wednesday, would see Germany accepting 31,000, followed by France with 24,000 and Spain with almost 15,000.

But Turkish Prime Minister Ahmed Davutoglu, whose country has become a key transit route for refugees fleeing war in neighbouring Syria, on Sunday lashed out at the “ridiculously small” share of refugees EU countries were accepting.

Writing in Germany’s Frankfurter Allgemeine Zeitung, he hit out at “Christian fortress Europe” pointing out that Turkey had already taken in more than two million people from war-torn Syria and Iraq.

His remarks came just days after Hungary, which is building a wall to keep out migrants after some 50,000 new arrivals in August alone, raised the alarm over the impact of mainly Muslim refugees on Europe’s “Christian culture”.

>>Read: Commission frowns on ‘Christian only’ solidarity with migrants

Refugees continue to flow into Greece

Meanwhile, the flow of people risking the dangerous journey on flimsy boats across the Mediterranean shows no sign of abating, as they flee a four-year-old civil war in Syria that has killed about 250,000 civilians, and wars in Iraq, Afghanistan and in Africa.

On the Greek Island of Lesbos, about 500 Afghans protesting at lengthy identification procedures scuffled with Greek police in the main port. A Greek ferry took 1,744 migrants and refugees to Athens from Lesbos on Sunday and another one with 2,500 migrants was expected later in the day, the coastguard said.

A record 50,000 people hit Greek shores in July alone, and were ferried from islands unable to cope to the mainland by a government in financial crisis and keen to dispatch them into Macedonia, from where they enter Serbia and then Hungary.

More than 2,000 have died at sea so far this year. The Cypriot coastguard picked up 114 Syrian refugees from a fishing boat on Sunday. The conflict the refugees left behind shows no signs of stopping either.