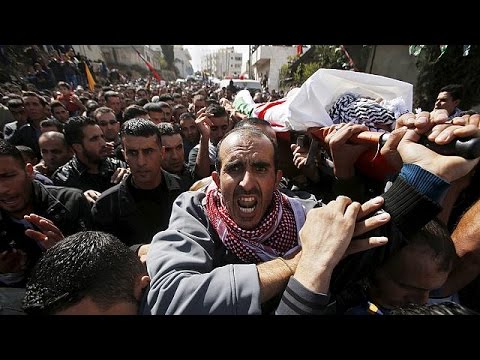 “There is mounting evidence that, as tensions have risen dramatically, in some cases Israeli forces appear to have ripped up the rulebook and resorted to extreme and unlawful measures,” the group’s Middle East and North Africa director, Philip Luther, said in a statement.

“Intentional lethal force should only be used when absolutely necessary to protect life,” he said. “Instead we are increasingly seeing Israeli forces recklessly flouting international standards by shooting to kill in situations where it is completely unjustified.”

The international rights group released the statement amid ongoing investigations into what it termed Israel’s use of “intentional lethal force” against Palestinians “without justification.”

Investigations documented at least four cases where Palestinians were deliberately shot dead when they posed no imminent threat.

In other cases, Palestinians were shot and left to bleed without medical attention, in violation of the prohibition of torture and other ill-treatment, the group said.

Amnesty cited the case of 19-year-old Saad Muhammad Youssef al-Atrash, shot by Israeli forces while retrieving an ID card from his pocket on the request of an Israeli soldier in Hebron’s Old City.

Israeli police labelled the incident an “attempted stabbing,” Amnesty said, but eyewitnesses said the teen posed no threat before he was shot by a soldier standing behind him six or seven times.

Al-Atrash was then left to bleed on the ground for around 40 minutes without medical treatment. Another 20 minutes reportedly passed as the teen waited in front of the ambulance before being lifted inside and taken away.

The eyewitness also reported seeing soldiers “bring a knife and place it in the dying man’s hand,” Amnesty added.

‘Extrajudicial executions’ and the ICC

Amnesty’s statement came as New Zealand announced that they are drafting a UN Security Council to call on Palestinians not to take Israel to the International Criminal Court so as to allow for a renewed peace process, according to Israeli daily Haaretz.

The Palestinian leadership swore earlier this month to bring cases of “extrajudicial execution” of Palestinian by Israeli forces to the ICC.

More than 60 Palestinians have been killed since Oct. 1, around half of whom were shot dead after alleged “stabbing attacks.”

The draft resolution would also require Israel to stop settlement construction and home demolitions in the occupied West Bank.

EU Foreign Policy Chief Federica Mogherini, US Secretary of State John Kerry, and UN Secretary-General Ban Ki-Moon have met separately with Israeli, Palestinian, and Jordanian leaders over the past week in an effort to quelling violence in the area.

The Middle East Quartet met Friday in Vienna and is expected to travel to the Middle East in preparation for renewed peace talks.

When Kerry last week asked Abbas about the wave of unrest that has swept the occupied Palestinian territory, including a series of stabbing attacks, Abbas told Kerry that young Palestinians were “angry, hopeless, and seeking independence and freedom.”

While Netanyahu and Abbas have both acknowledged in recent months that they would be willing to meet, attempted peace negotiations between Israel and Palestinian leadership have been ongoing for decades and are largely viewed as having failed to make any progress towards ending Israel’s nearly 50-year military occupation.

The most recent spate of negotiations led by the United States collapsed in April 2014.