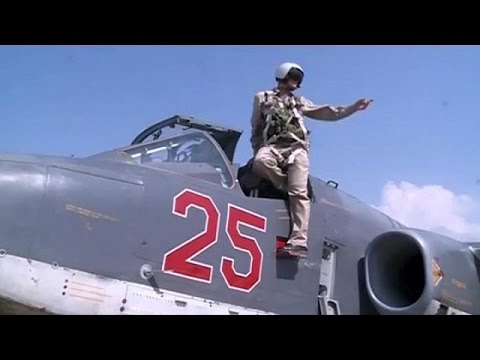 Bondo Dorovskikh traveled to eastern Ukraine last year to join separatists in their war against Kyiv. He soon quit the rebels in disillusionment because they turned out to be more like a “criminal gang” — not what Russian TV promised. He mulled switching sides, but was dissuaded.

Now, the 41-year-old Russian plans to take up arms as a volunteer fighter on a different front: Syria, where a devastating civil war is sucking in foreign powers and pitting rebel groups, Islamic State (IS) militants, and forces loyal to President Bashar al-Assad against each other.

Since January, Dorovskikh has been gathering groups of like-minded Russians seeking to fight against IS. On September 22, a group of 12 Russian men set out for Syria, while he said he was due to follow in a few days.

“I’ve been looking for military combat like a drug addict,” he told RFE/RL in a recent interview. “The first time you go it’s scary, but then you can’t stop,” he said. “I want to be in these fights.”

There are thought to be thousands of Russians, many of them from the mostly Muslim regions of the North Caucasus, fighting alongside IS and other Islamist militants against the forces of Moscow’s ally, Assad.

President Vladimir Putin’s chief of staff, Sergei Ivanov, said on September 30 that citizens of Russia and other former Soviet republics were joining IS militants “by the hour.”

Dorovskikh, however, said he would be fighting against IS, alongside a Kurdish Peshmerga unit, forces formally supported by Russia.

Russia launched a campaign of air strikes against Assad’s foes in Syria on September 30, dramatically deepening its involvement in the war after a big military buildup in the coastal Latakia Province. But the timing of Dorovskikh’s plunge into the fray appears largely coincidental.

“The Kurds are very efficient guys. They have very good organization for taking in volunteers,” he told RFE/RL. “We’re not the only ones who appealed to Bashar al-Assad; several Russian citizens who are now in Syria came up against absolutely the same problems.”

Russia acknowledges sending advisers to Syria, in part to help the military use weapons provided by Moscow, but Putin has vowed not to deploy ground troops — at least for now. There have been reports of Russian volunteers fighting on the government side at various times in the more than four-year war that has killed some 250,000 people.

Dorovskikh said most of the men he had rounded up to fight in Syria have past military experience, and their average age is about 40. “We are gathering people who don’t just have combat experience, but have served in the army. Nearly everyone came from the army, nearly all are officers,” he said. “They are people who served in Chechnya, some on the Tajik-Afghan border. There’s one who served in the French Foreign Legion.”

The route for Dorovskikh’s volunteers takes them to Sulaymaniyah in Iraq’s Kurdish region, and then into Syria, he said. He said they were not being paid to fight and were required to pay their own way to Iraq, obtain their equipment, and bring $200 a month for expenses.

Dorovskikh said he was motivated by the desire to fight against the “evil” that he sees in IS. “They kill defenseless people, cut off people’s heads, and set people on fire. They aren’t even warriors. Do warriors behave like that with defenseless people?” he asked. “Anyway, [IS] is a terrorist organization that is recognized as such by probably every single government in the world.”

His yearning for battle appears to have been heightened by his experience fighting alongside separatists in eastern Ukraine, in a conflict that has killed more than 7,900 people since April 2014.

Pumped up last year by Russian state TV reports that portrayed the conflict as a struggle against bloodthirsty Ukrainian “fascists” bent on genocide, Dorovskikh joined Ghost, an anti-Kyiv rebel group led by Aleksei Mozgovoi, who was assassinated in May 2015.

Dorovskikh was posted in rebel-held territory in the Luhansk region and given a gun — but said he soon found that rather than fighting, the rebel fighters spent their time looting and getting drunk.

Disillusioned, he left the rebels and briefly flirted with joining the Ukrainian National Guard, he told RFE/RL.

“I wanted to help the Ukrainian side,” he said. “But the Russians who are on that side are disillusioned with what’s going on there and regret going there. They can’t return to Russia: they are practically considered terrorists here.”