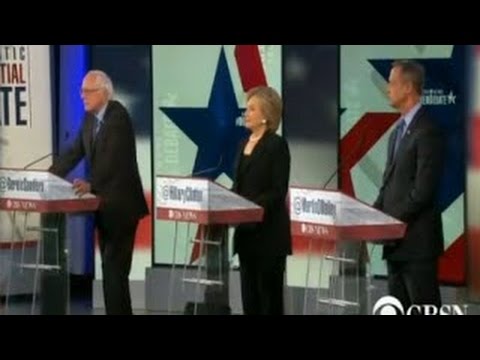 At the CBS Democratic Party debate on Saturday night, the Paris attacks dominated as a concern.

Unlike the Republican field, which is somewhat divided on the necessary response, the Democrats agree that all-out war is undesirable as a response. (In the GOP, Rand Paul is cautious about overseas war, Donald Trump wants to hand Syria to Russia, and Ben Carson wants to commit genocide).

Asked about the fight against ISIL, Sec. Hillary Clinton emphasized teamwork with allies and explicitly said, “it cannot be an American fight.” Interestingly, she was frank in saying that the US is working with the Kurds in northeast Syria, instead of using the name of an umbrella group (this US-YPG cooperation angers NATO ally Turkey).

HILLARY CLINTON: Well, John I think that– we have to look at ISIS as the leading threat of an international terror network. It cannot be contained, it must be defeated. There is no question in my mind that if we summon our resources, both our leadership resources and all of the tools at our disposal, not just military force which should be used as a last resort, but our diplomacy, our development aid, law enforcement, sharing of intelligence in a much more– open and cooperative way– that we can bring people together.

But it cannot be an American fight. And I think what the president has consistently said– which I agree with– is that we will support those who take the fight to ISIS. That is why we have troops in Iraq that are helping to train and build back up the Iraqi military, why we have special operators in Syria working with the Kurds and Arabs so that we can be supportive. But this cannot be an American fight, although American leadership is essential.

Bernie Sanders, asked about this issue, blamed climate change and the Bush Iraq War for destabilizing the region, with the latter point being an obvious dig at Sec. Clinton for voting for that war. Sanders emphasized the need of regional nations to take on ISIL and defend themselves.

“BERNIE SANDERS: Absolutely. In fact, climate change is directly related to the growth of terrorism. And if we do not get our act together and listen to what the scientists say you’re gonna see countries all over the world– this is what the C.I.A. says, they’re gonna be struggling over limited amounts of water, limited amounts of land to grow their crops. And you’re gonna see all kinds of international conflict.

But of course international terrorism is a major issue that we’ve got to address today. And I agree with much of what– the secretary and– and the governor have said. Only have one area of– of disagreement with the secretary. I think she said something like, “The bulk of the responsibility is not ours.”

Well, in fact, I would argue that the disastrous invasion of Iraq, something that I strongly opposed, has unraveled the region completely. And led to the rise of Al Qaeda– and to– ISIS. Now, in fact, what we have got to do– and I think there is widespread agreement here– ’cause the United States cannot do it alone. What we need to do is lead an international coalition which includes– very significantly– (UNINTEL) nations in that region are gonna have to fight and defend their way of life.
”

At another point in the debate, moderator John Dickerson quoted Sen. Mario Rubio that the Paris attacks show that the US is at war with “radical Islam.”

Sec. Clinton declined to use that formulation, because it has “Islam” in it and she wanted to avoid labeling a whole religion:

JOHN DICKERSON: Just to interrupt, he– he didn’t say all Muslims. He just said radical Islam. Is that a phrase you don’t–

HILLARY CLINTON: –I– I think that you can– you can talk about Islamists who– clearly are also jihadists. But I think it’s– it– it’s not particularly helpful to make the case that– Senator Sanders was just making that I agree with that we’ve gotta reach out to Muslim countries. We’ve gotta have them be part of our coalition.

If they hear people running for– president who basically shortcut it to say we are somehow against Islam– that was one of the real contributions– despite all the other problems that George W. Bush made after 9/11 when he basically said after going to a mosque in Washington, “We are not at war with Islam or Muslims. We are at war with violent extremism. We are at war with people who use their religion for purposes of power and oppression.” And yes, we are at war with those people that I don’t want us to be painting with too brand a brush.”

Sanders likewise refused to be drawn into using the term “Islam” in connection with the radicals:

“BERNIE SANDERS: I don’t think the term is what’s important. What is important to understand is we have organizations, whether it is ISIS or Al Qaeda who do believe we should go back several thousand years, we should make women third-class citizens, that we should allow children to be sexually assaulted, that they are a danger to modern society. And that this world with American leadership can and must come together to destroy them. We can do that.

BERNIE SANDERS: And it requires an entire will to come together including, in a very active way, the Muslim nations.”

Although, since Islam is only a little over 1400 years old, fundamentalists don’t want to take us back “thousands of years.”

Former Maryland governor Martin O’Malley used the phrase ‘radical jihadis’ rather than ‘radical Islam.’ But then he went on to insist on avoiding Islamophobio or stereotyping Muslim-Americans:

“MARTIN O’MALLEY: I believe calling it what it is, is to say radical jihadis, that’s to call what it is. But John, let’s not fall into the trap of thinking that all of our Muslim-American neighbors in this country are somehow our enemies here. They are our first line of defense.

And we are going to be able to defeat ISIS on the ground there as well as in this world– because of the Muslim-Americans in our country and throughout the world who understand that this brutal and barbaric group is perverting the name of a great world religion. And now like we never before– we need our Muslim-American neighbors to stand up and to– and to be a part of this.”

The Democrats obviously see the Muslim-Americans, like Latino Americans, as a constituency they want for the Democratic Party. Muslim-Americans can be part of a swing vote in a few states– Michigan, Ohio, New Jersey and Florida. Since in these states, the electorate is often evenly split, a few thousand Muslim-American votes can be crucial to victory.

So the Dems want to look strong on foreign policy and condemn violence by fundamentalist vigilantes, they want to avoid slamming Islam per se and so risk losing a potentially important constituency. On problem with O’Malley’s terminology is that for many Muslims the term ‘jihad’ has a positive connotation, of giving one’s all for the faith. It is therefore better not to give the word away to radicals.

There was a fair amount of unanimity on key points, even though it would not be admitted by the candidates.

The keywords were avoidance of war, deploying international coalitions, reliance on regional allies, and respectful language about Islam. This language was designed to appeal both to Democratic voters on the left mauled by Bush’s wars and to Muslim-Americans wary of GOP Islamphobia and racism.