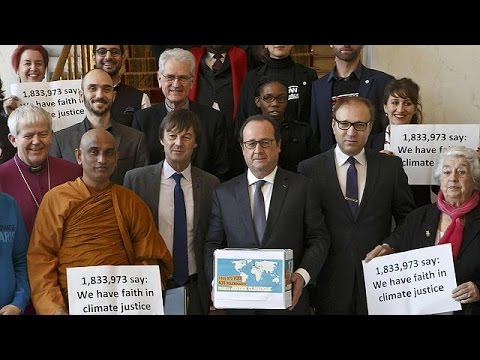 At the Paris climate summit, delegates are deciding on a global goal for temperature rise. At the time of publication, the latest draft text calls for the world to “hold the increase in the global average temperature to well below 2℃ above pre-industrial levels and to pursue efforts to limit the temperature increase to 1.5℃”.

But the climate action pledges made by 185 countries ahead of the summit don’t add up to 1.5℃ or warming or even 2℃. Taken together, they add up to a 2.7℃ world.

As the negotiations go on, 2015 is about to set a new global temperature record, and is likely to have reached 1℃ warming already.

How global warming affects us now

What do all these numbers means for the planet? We can already see. Halfway to 2℃, an increase in annual mean temperatures is observed nearly everywhere on the globe. In Europe, Australia and Asia there is a detectable upward trend in the occurrence of heat waves.

The observed occurrence of heavy rain is exceeding what we expect under a stable climate. Globally, the observed number of record-breaking daily rain events during 1980-2010 was 12% higher than would be expected in a world without climate change. Increases have reached 56% in South East Asia, 31% in Europe, and 24% in the central US. These observations match the expected increase in rain under global warming: warmer air can carry more water, which can be released during short-term, heavy bursts of rainfall.

When water heats up, it takes up more space, a process known as thermal expansion. This process, along with melting from mountain glaciers, the Greenland ice sheet and Antarctica, has seen the sea level rise by about 20 cm over the past 100 years. The rate of rise has reached about 3 mm per year.

The risk of flooding is also projected to increase. Currently, floods are among the main weather events that force people to leave their homes each year. An average of 22.5 million people per year over the period 2008-2014. Without accounting for changes in population, the number of people affected by flood events could more than double if global warming increased from 2℃ to 4℃.

If global warming is kept to 2℃, the availability of water is expected to decrease in some areas such as the Mediterranean by up to 50%. Globally, the additional warming could lead to a 20% increase in the number of people affected by chronic water scarcity.

Sea level is expected to rise for centuries. Over 2000 years, sea level has been estimated to rise by about two metres for each degree of global warming. Looking ahead to the end of this century, limiting global warming to 2℃ could limit sea level rise to 0.26–0.55 m. It may reach 0.45–0.82 m for warming closer to 4℃. In this world, the rate of sea-level rise may exceed 1 cm per year.

Some components of the climate system are expected to tip into another state when warming exceeds a certain threshold, a process that cannot be stopped by stabilising temperatures.

The environmental impacts are profound and could endanger the livelihoods of millions of people. For example, the Greenland ice sheet is expected to vanish if temperatures remain over a certain level. The critical limit could lie below 2℃ of global warming. This would increase sea level by about seven metres.

One of these points might already have tipped: very recent evidence shows that parts of the West Antarctic ice sheet may have already entered an irresistible decline. Over the coming centuries or millennia this alone could contribute three metres to global mean sea level rise.