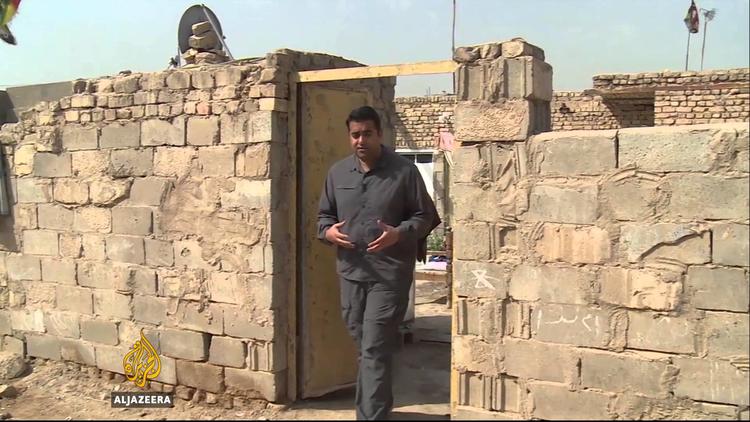 In 2015, every Iraqi – almost without exception – paid a price for events in their country. Some Iraqis lost their jobs, others lost loved ones. But the biggest loss of all in 2015 cannot be measured.

In Iraq, 2015 was a taxing year. Almost every single Iraqi paid a price of some sort for what happened in their homeland this year, whether that was in the form of an actual financial tax resulting from the country’s economic crisis or an emotional one: At worst, the security crisis caused the death of one of their loved ones. But many locals think that one of the most terrible things that happened in Iraq in 2015 cannot easily be measured: This year many Iraqis learned that tomorrow will not necessarily be better than today. Political problems on top of security crises just ahead of economic breakdowns have seen any hope for a brighter future dissipate. For many Iraqis, 2014 was far better than 2015.

“This year has been the worst year,” says Kathem al-Zubaidi, from his small home in the Rifai neighbourhood in the southern city of Nasiriyah. He lives here with his daughter-in-law and his three grandchildren. Missing from the home is the man in the framed photograph on the wall, also named Kathem. The man in the photo wears a military uniform and a back ribbon hangs across the picture.

“When his fellow soldiers came to tell me my son had died I did not believe them,” al-Zubaidi says, “until I saw his corpse along with dozens of others at the base in Baghdad that receives all the dead soldiers from the fronts.”

Al-Zubaidi’s son was killed during fighting against the extremist group known as the Islamic State in January 2015.

“Eleven months have passed but I still cannot cope thinking about his loss,” the grandfather said. “Whenever I look at his wife and children I just feel so sad.”

Al-Zubaidi says he has been trying to secure some sort of income or pension for his daughter-in-law and his son’s family. He has been knocking on the doors of various government departments for months so that he can complete the pension papers for his son and get his daughter some money. But he hasn’t been able to navigate his way through the bureaucracy and remains critical of the Iraqi government.

“Our government couldn’t care less about the people killed in this fight,” al-Zubaidi says.

It was not until this December that Iraq’s Ministry of Defence issued a statement on how many military had been killed since the beginning of the security crisis, started by the Islamic State, or IS, group when they took control of the northern city of Mosul in June 2014. Up to December 21, the Ministry says that 2,649 soldiers have been killed and 11,230 injured.

But these figures in no way tell the whole story. The Ministry of Interior has not yet announced how many of its men have been killed and the volunteer Shiite Muslim militias, known locally as the Hashd al-Shaabi, or Popular Mobilization Units, have not released any numbers as to how many fighters they have lost either. It is their policy to refuse to give out those kinds of details. However anecdotes and accounts from those working in or near Najaf graveyards favoured for the burial of Shiite Muslims appear to indicate that the numbers would be as high as the army’s, if not higher.

This year Hatem al-Fahdawi’s family began living what they describe as an almost “medieval kind of life”. Al-Fahdawi must carry water to his new home in a ten-square-meter tent, complete with the United Nations logo, and his wife cooks using firewood she has gathered. To use the toilets, the family, which includes two children and al-Fahdawi’s mother, must walk a long way as there are only ten toilets for hundreds of displaced people living in the same camp as them.

In 2015, al-Fahdawi tells NIQASH, he lost everything. “This year was a terrible nightmare,” says the Iraqi man, who originally comes the Andalus neighbourhood in the city of Ramadi, Anbar province. “Look at our life today. The tent is almost collapsing because of the rain; it doesn’t protect us from heat or cold and my kids are always sick.”

The al-Fahdawis’ home used to be a lot bigger – 200 square meters in fact – and al-Fahdawi used to earn a good living as a cab driver. However he lost his car, home and any money in his bank account after the IS group occupied Ramadi and confiscated all his worldly goods.

“The IS group took everything from me because they believe that any person who left the city was a traitor,” al-Fahdawi says. “But when I see my wife and my children living like this, I almost lose my own desire to live.”

The latest reports from the International Organization for Migration indicates that almost 3.2 million Iraqis have been forced out of their homes in their own country. Most of the displaced Iraqis come from the provinces of Anbar and Ninawa, where the IS group has taken control.

“I will never forget 2015,” says Anwar Jirjis, a Christian man originally from Baghdad. “It has been a very fateful year.”

Jirjis, his wife and his daughter are currently in Austria and are applying for asylum in Europe. “But I left Iraq against my will,” Jirjis told NIQASH during a telephone interview. “Although many of our Christian friends, relatives and neighbours left Iraq long ago, I always refused to go. Baghdad was my city too – I didn’t think Christians should just leave. Our family has been there for decades. In the end though my wife and my daughter pressured me to leave.”

A few years ago the church that the Jirjis family attended used to be full, crowded on Sundays and special occasions. But over the last few months, the numbers of the congregation has dwindled rapidly and the church closed its doors on every day except holy days. The church group also started organising a lot of farewell parties, he adds.

Jirjis says it was an explosion near his home in Ghadeer in September 2014 that started the family on their journey out of Iraq.

“It was two car bombs,” he notes. “And I can still remember the sound of the explosion and the taste of the dust on my tongue. It was very frightening. I saw dozens of dead and injured people.”

It was after this that his wife begged him to leave Iraq and then that he decided this was the right course of action – he then sold everything he owned in Baghdad to finance the journey to Europe: his house in Ghadeer in central Baghdad, his car and the store he owned.

Christians in Iraq are often targeted by religious extremists, often because Christians own or manage stores or clubs and bars selling alcohol – something local Muslims are prohibited from doing because of their religious beliefs. But of course, violence in Bagdad does not just affect Christian Iraqis living there – it also impacts on the Muslim majority and other ethnic or religious minorities. The extremists who set off car bombs don’t discriminate as to who they target. And as a result all kinds of Iraqis have tried to leave the country this year, fleeing persecution, increasing violence or, even in some cases, the lack of hope that things will ever get better here. Because many Iraqis have left the country in illegal ways, through Turkey or by using people smuggling networks, it is hard to know exactly who and how many have left the country for good.

A few months ago Saman Khalil closed his small restaurant in the centre of Erbil, the capital of the semi-autonomous northern region of Iraqi Kurdistan. There’s been a financial crisis in this region for months now – the authorities in the region have been unable to pay the salaries of local civil servants and development and building projects in Iraqi Kurdistan have all but halted.

“The number of people coming into the restaurant just kept dropping,” Khalil told NIQASH over the phone. “I started to lose money because while I was open I still had to pay my employees and taxes.” So he decided to try and sell the business instead. But nobody is interested. “People are afraid of investing money in anything,” Khalil explains. “They prefer to keep their money.”

Khalil says his wife works as a teacher in an Erbil school and she too has been a victim of the current financial crisis. She has been waiting to be paid for the past four months but has received nothing up until today. Iraqi Kurdistan’s teachers actually began demonstrating at the lack of payment and although they were promised that the problem would be solved, nothing has happened.

Iraqi Kurdistan is not the only part of Iraq that is suffering from a financial crisis. While the northern region’s problems may have started because of disagreements as to how much of the federal budget the Kurdish government was entitled to, it has been exacerbated by the budgetary problems faced by the country as a whole. The Iraqi budget had been calculated based on higher oil prices – the country’s main way of earning money – and as oil prices have dropped, the financial criss has worsened. The Iraqi government was forced to borrow money and to cut its expenditure, which included employing fewer civil servants; that’s a dangerous move in a country where the government is the main employer.

The Iraqi government passed its 2016 budget on December 16 this year but as the specialist publication, Iraqi Oil Report, noted after the decision was made, many saw the budget as unrealistic yet again because, “as with earlier drafts, the budget assumes the government will sell oil at an average price of US$45 per barrel. Iraq’s average sale price in November was US$36.42 per barrel”.