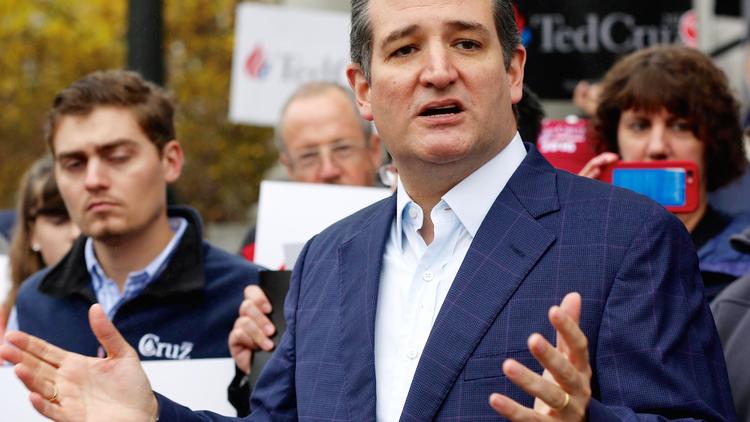 The crowd that gathered in an airplane hangar in the desert roared with excitement when the man on stage vowed to murder women and children.

It was just another Donald Trump campaign event, and the candidate had affirmed his previously made pledge not only to kill terrorists but to “take out” their family members, too. Outrageous as that might sound, it hardly distinguished Trump from most of his Republican rivals, fiercely competing over who will commit the worst war crimes if elected. All the chilling claims about who will preside over more killings of innocents in distant lands — and the thunderous applause that meets such boasts — could easily be taken as evidence that the megalomaniacal billionaire Republican front-runner, his various opponents, and their legions of supporters, are all crazytown.

Yet Trump’s pledge to murder the civilian relatives of terrorists could be considered quite modest — and, in its bluntness, refreshingly candid — when compared to President Obama’s ongoing policy of loosing drones and U.S. Special Operations forces in the Greater Middle East.  Those policies, the assassinations that go with them, and the “collateral damage” they regularly cause are based on one premise when it comes to the American public: that we will permanently suspend our capacity for grief and empathy when it comes to the dead (and the living) in distant countries.

Classified documents recently leaked to the Intercept by a whistleblower describe the “killing campaign” carried out by the CIA and the Pentagon’s Joint Special Operations Command in Yemen and Somalia. (The U.S. also conducts drone strikes in Iraq, Syria, Afghanistan, Pakistan, and Libya; the leaked documents explain how President Obama has institutionalized the practice of striking outside regions of “active hostilities.”) Intelligence personnel build a case against a terror suspect and then develop what’s termed a “baseball card” — a condensed dossier with a portrait of the individual targeted and the nature of the alleged threat he poses to U.S. interests — that gets sent up the chain of command, eventually landing in the Oval Office.  The president then meets with more than 100 representatives of his national security team, generally on a weekly basis, to determine just which of those cards will be selected picked for death.  (The New York Times has vividly described this intimate process of choosing assassination targets.)

Orders then make their way down to drone operators somewhere in the United States, thousands of miles from the individuals slated to be killed, who remotely pilot the aircraft to the location and then pull the trigger. But when those drone operators launch missiles on the other side of the world, the terrifying truth is that the U.S. “is often unsure who will die,” as a New York Times headline put it.

That’s because intel on a target’s precise whereabouts at any given moment can be faulty. And so, as the Times reported, “most individuals killed are not on a kill list, and the government does not know their names.” In 2014, for instance, the human-rights group Reprieve, analyzing what limited data on U.S. drone strikes was available, discovered that in attempts to kill 41 terror figures (not all of whom died), 1,147 people were killed.  The study found that the vast majority of strikes failed to take down the intended victim, and thus numerous strikes were often attempted on a single target. The Guardian reported that in attempts to take down 24 men in Pakistan — only six of whom were eventually eliminated in successful drone strikes — the U.S. killed an estimated 142 children.

Their Grief and Mine

Apparently you and I are meant to consider all those accidental killings as mere “collateral damage,” or else we’re not meant to consider them at all. We’re supposed to toggle to the “off” position any sentiment of remorse or compassion that we might feel for all the civilians who die thanks to our country’s homicidal approach to keeping us safe.

I admit to a failing here: when I notice such stories, sometimes buried deep in news reports — including the 30 people killed, three of them children, when U.S. airpower “accidentally” hit a Doctors Without Borders hospital in Kunduz, Afghanistan, last October; or the two women and three children blasted to smithereens by U.S. airpower last spring at an Islamic State checkpoint in northern Iraq because the pilots of two A-10 Warthogs attacking the site didn’t realize that civilians were in the vehicles stopped there; or the innumerable similar incidents that have happened with remarkable regularity and which barely make it into American news reports — I find I can’t quite achieve the cold distance necessary to accept our government’s tactics.  And for this I blame (or thank) my father.

To understand why it’s so difficult for me to gloss over the dead, you have to know that on December 1, 2003, a date I will never forget nor fully recover from, I called home from a phone booth on a cobblestone street in Switzerland — where I was backpacking at the time — and learned that my Dad was dead. A heart attack that struck as suddenly as a Hellfire missile.

Standing in that sun-warmed phone booth clutching the receiver with a slick hand, vomit gurgling up at the back of my throat, I pressed my eyes closed and saw my Dad. First, I saw his back as he sat at the broad desk in his home office, his spot of thinning hair revealed. Then, I saw him in his nylon pants and baseball cap, paused at the kitchen door on his way to play paddle tennis. And finally, I saw him as I had the last time we parted, at Boston’s Logan Airport, on a patch of dingy grey carpet, as I kissed his whiskered cheek.

A few days later, after mute weeping won me a seat on a fully booked trans-Atlantic flight, I stood in the wan light of early December and watched the employees of the funeral home as they unloosed the pulleys to lower Dad’s wooden box into the ground. I peered down into that earthen hole, crying and sweating and shivering in the stinging cold, and tried to make sense of the senseless: Why was he dead while the rest of us lived?

And that’s why, when I read about all the innocent civilians we’ve been killing over the years with the airpower that presidential candidate Ted Cruz calls “a blessing,” I tend to think about the people left behind. Those who loved the people we’ve killed. I wonder how they received the news. (“We’ve had a tragedy here,” my Mom told me.) I wonder about the shattering anguish they surely feel at the loss of fathers, mothers, brothers, sisters, children, friends. I wonder what memories come to them when they squeeze their eyes closed in grief. And I wonder if they’ll ever be able to pick up the pieces of their lives and return to some semblance of normalcy in societies that are often shattering around them. (What I don’t wonder about, though, is whether or not they’re more likely to become radicalized — to hate not just our drones but our country and us — because the answer to that is obvious.)

Playing God in the Oval Office

“It’s the worst thing to ever happen to anyone,” actor Liam Neeson recently wrote on Facebook. He wasn’t talking about drone strikes, but about the fundamental experience of loss — of losing a loved one by any means. He was marking five years since his wife’s sudden death. “They say the hardest thing in the world is losing someone you love,” he added. I won’t disagree. After losing her husband, Facebook Chief Operating Officer Sheryl Sandberg posted about “the brutal moments when I am overtaken by the void, when the months and years stretch out in front of me, endless and empty.” After her husband’s sudden death, author Joan Didion described grief as a “relentless succession of moments during which we will confront the experience of meaninglessness itself.”

That squares with the description offered by a man in Yemen who had much of his extended family blown away by an American drone at his wedding. “I felt myself going deeper and deeper into darkness,” the man later told a reporter. The drone arrived just after the wedding party had climbed into vehicles strewn with ribbons to escort the bride to her groom’s hometown. Everyone’s belly was full of lamb and it was dusk. It was quiet. Then the sky opened, and four missiles rained down on the procession, killing 12.

U.S. airpower has hit a bunch of other weddings, too. And funerals. And clinics. And an unknown and unknowable number of family homes. The CIA’s drone assassination campaign in the tribal regions of Pakistan even led a group of American and Pakistani artists to install an enormous portrait of a child on the ground in a frequently targeted region of that country. The artists wanted drone operators to see the face of one of the young people they might be targeting, instead of the tiny infrared figures on their computer consoles that they colloquially refer to as “bugsplats.” It’s an exhortation to them not to kill someone else’s beloved.

Once in a while a drone operator comes forward to reveal the emotional and psychic burden of passing 12-hour shifts in a windowless bunker on an Air Force base, killing by keystroke for a living. One serviceman’s six years on the job began when he was 21 years old and included a moment when he glimpsed a tiny figure dart around the side of a house in Afghanistan that was the target of a missile already on its way. In terror, he demanded of his co-pilot, “Did that look like a child to you?” Feverishly, he began tapping messages to ask the mission’s remote observer — an intelligence staffer at another location — if there was a child present. He’ll never know the answer. Moments later, the missile struck the house, leveling it. That particular drone operator has since left the military. After his resignation, he spent a bitterly cold winter in his home state of Montana getting blackout drunk and sleeping in a public playground in his government-issued sleeping bag.

Someone else has, of course, taken his seat at that console and continues to receive kill orders from above.

Meanwhile Donald Trump and most of the other Republican candidates have been competing over who can most successfully obliterate combatants as well as civilians.  (Ted Cruz’s comment about carpet-bombing ISIS until we find out “if sand can glow in the dark” has practically become a catchphrase.)  But it’s not just the Republicans. Every single major candidate from both parties has plans to maintain some version of Washington’s increasingly far-flung drone campaigns. In other words, a program that originated under President George W. Bush as a crucial part of his “global war on terror,” and that was further institutionalized and ramped up under President Obama, will soon be bequeathed to a new president-elect.

When you think about it that way, election 2016 isn’t so much a vote to select the leader of the planet’s last superpower as it is a tournament to decide who will next step into the Oval Office and have the chance to play god.

Who will get your support as the best candidate to continue killing the loved ones of others?

Go to the polls, America.

Mattea Kramer is a TomDispatch regular who writes on a wide range of topics, from military policy to love and loss. She blogs at This Life After Loss. Follow her on Twitter.

The LipTV: ” US Military Tells GOP Why We Can’t Carpet Bomb ISIS”