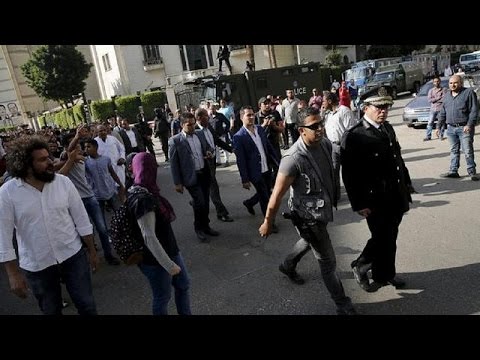 (Beirut) – Egyptian security forces arrested at least 382 people in the days leading up to and during the dispersal of mostly peaceful protests on April 25, 2016. The protests followed a rare mass demonstration against President Abdel Fattah al-Sisi in Cairo on April 15.

Police arrested lawyers and numerous activists, and temporarily held at least 33 journalists, according to witnesses and media reports, who also said that police stopped people riding public transportation or walking in the street, made warrantless inspections of their mobile phones, and arrested them if they found anti-government images.

“Egypt’s effective zero-tolerance policy for protests leaves people with no outlet to peacefully express their grievances, and protesting can mean years in prison,” said Nadim Houry, deputy Middle East director. “The authorities should release all those held solely for peaceful expression, and parliament should amend the repressive law on public assembly.”

Police arrested at least 286 people on April 25, according to the Front for the Defense of Egyptian Protesters, an independent group of lawyers and activists. The large majority of the arrests, which spanned seven governorates, occurred in the greater Cairo area, the group said.

Authorities did not allow those arrested to have defense lawyers present during questioning by agents of the Interior Ministry’s National Security Agency in the Agouza and Dokki police stations, where many of those arrested in the capital were taken, said Freedom for the Brave, an activist group that documents cases alongside lawyers.

One lawyer who was at the Dokki Police Station told Human Rights Watch that police fired teargas at lawyers waiting outside the station at about 10 p.m. on April 25, after the station chief had yelled at them to leave.

Authorities transferred many of those arrested on April 25 to the Red Mountain Central Security Forces camp outside Cairo, the Front for the Defense of Egyptian Protesters said. One human rights lawyer said she believed 140 people were being held at the camp. Central Security Forces camps are not lawful places of detention, and witnesses have previously told Human Rights Watch that the authorities have used them for enforced disappearances and torture.
Journalists and activists protest against the restriction of press freedom and to demand the release of detained journalists, in front of the Press Syndicate in Cairo, Egypt on April 26, 2016.
Expand

Journalists and activists protest against the restriction of press freedom and to demand the release of detained journalists, in front of the Press Syndicate in Cairo, Egypt on April 26, 2016.
© 2016 Reuters

The protests, which police dispersed in some cases with teargas, occurred despite a series of pre-emptive arrests that began during the night of April 21, when police detained at least 96 people, many at their homes or downtown Cairo cafés, according to the Front.

Prosecutors in multiple governorates, including Cairo and Alexandria, opened at least 11 investigations into whether to bring charges against those arrested in the pre-April 25 sweep, the Heliopolis Center for Political Development and Human Rights said. The investigations remain open.

The allegations against those arrested included incitement to use force to overturn the government, incitement to attack police stations, membership in a terrorist group, promoting terrorist crimes and thoughts through the Internet, publishing false news through social media to disturb stability and security, and incitement to demonstrate without permission.

Law 107 of 2013 on the Right to Public Meetings, Processions and Peaceful Demonstrations, passed following the military’s removal of Mohamed Morsy, Egypt’s first freely elected president, effectively bans opposition protests and allows the Interior Ministry to disperse gatherings at will. Those convicted can face up to five years in prison for breaking the law. Since its passage, courts have sentenced hundreds of people for protesting illegally.

The recent events followed a rare anti-government demonstration on April 15, which protesters called the “Friday of Land.” Hundreds of people gathered at the national Journalists Syndicate headquarters in Cairo to protest abuses committed under President al-Sisi’s administration and al-Sisi’s recent decision to cede two Red Sea islands to Saudi Arabia.

Though the security forces did not disperse the protest with force, police detained at least 25 people from the vicinity of the syndicate that day and opened investigations, according to the Front. The investigations remain open.

A friend of one of the detainees told Human Rights Watch that they were first held in windowless cells in Cairo’s Qasr al-Nil Police Station, where they had to rely on visitors to bring them food and water, since the police did not provide either, before the authorities transferred them to Tora Prison on April 22.

A week after the April 15 demonstration, amid public discussion of protests planned for April 25, the independent newspaper al-Shorouk reported that al-Sisi had held a meeting at which he stated he would not tolerate more protests. The presidency quickly denied the report.

But the day before the protests, the Interior Ministry warned that it would “confront with the utmost decisiveness and resolution any acts that could infringe public security. It will use all force to deal with any attempt to assault vital, important facilities or harm police facilities and utilities.”

On April 25, a national holiday marking the withdrawal of the Israeli armed forces from the Sinai Peninsula in 1982, security forces blocked roads leading to the Journalists Syndicate, refused to allow syndicate members inside, and permitted only pro-government demonstrators to enter the area to celebrate the holiday, multiple syndicate members said in accounts published on social media.

Mahmoud Kamel, a member of the syndicate’s board, described the April 25 events as a “black day for journalism and journalists,” according to al-Shorouk. Police detained at least 33 journalists throughout the day, eventually releasing all but two, according to the Committee to Protect Journalists.

At least six foreign journalists were among those detained, including four from France, one from Denmark, and one from Norway. Orla Guerin, a BBC correspondent, wrote on Twitter that supporters of al-Sisi beat a member of her crew as police watched and failed to intervene.

Elsewhere in Cairo, security forces stopped pedestrians, ordered them to open their mobile phones, and inspected their social media accounts, including Facebook, for “inciting pictures” or “anti-government publications,” witnesses told Masrawy, an independent website. Police arrested some of those they stopped, the witnesses said.

At about 4 a.m. on April 25, police arrested Ahmed Abdullah, the chairman of the board of trustees of the Egyptian Commission for Rights and Freedoms, at his home in Fifth Settlement, a Cairo suburb. Most of the allegations against him were similar to those leveled against others arrested in the previous day’s sweep, according to a statement by the commission. Police also accused Abdullah of broadcasting false news likely to disturb general security and of distributing publications calling for the overthrow of the government and the changing of the constitution, the commission said.

On April 23, a prominent human rights lawyer, Malek Adly, wrote on Facebook that the Supreme State Security Prosecution had issued a warrant for his arrest. He later confirmed to Human Rights Watch that the warrant was issued for charges including establishing a group to overturn the government, calling for obstructing the president from performing his duties, inciting demonstrations and “leadership of Muslim Brotherhood elements.” Adly has not yet been arrested.

Police arrested one lawyer, Haitham Mohammedein, on April 21, and at least four lawyers on April 25 and the days preceding the demonstration. Mohammedein remains in custody. His brother told Human Rights Watch that he had been arrested on a warrant issued by the State Security Prosecution accusing him of belonging to a terrorist group. The authorities were holding Mohammedein and others in a Central Security Forces Camp in Giza governorate known as Camp 10.5 Kilometers, his brother said.

“Egyptian authorities are trying to stifle any public discussion of al-Sisi’s policies,” Houry said. “It seems that the only public demonstrations al-Sisi will allow are the ones that support him.”