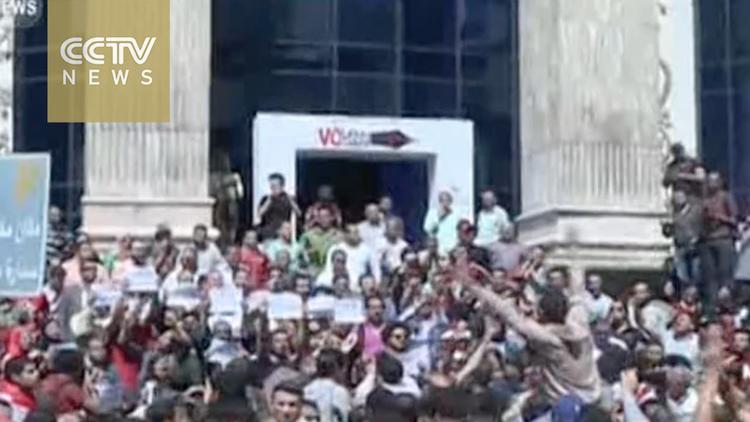 Thousands of Egyptians came into the streets Friday in the first major demonstrations in 2 and a half years, to protest the bestowal of the islands of Tiran and Sanafir on Saudi Arabia. Many Egyptians believe that the islands belong to Egypt, and it is unconstitutional for President Abdel Fattah al-Sisi to relinquish them to Saudi Arabia. Many believe that the Saudis paid a bribe for the islands to officers of the high state Establishment. I wrote about the controversy earlier this week in The Nation.

Youth protests in Egypt have died down not only because of the Draconian anti-protest law decreed by the military junta in fall of 2013, but also because the youth despaired of getting real political and economic change through protests after the officer corps’ counter-revolution. Many also, rightly or wrongly, fear the Muslim Brotherhood, which the army overthrew, as a secretive cult bent on turning Egypt into another Iran (ruled by clergy). They therefore don’t want to rock the boat so much that the Brotherhood returns to power.

Ahmad al-Bardini and al-Sayyid `Ala’ report in Shuruq that clashes broke out between state security peace and protesters in front of Mustafa Mahmoud Mosque, and that a massive crowd gathered in front of the building of the journalists’ syndicate.

The slogan of the demonstrators was that “Land is honor,” in protest against the agreement to draw a formal border between Egypt and Saudi Arabia, which leaves the two islands on the Saudi side of the border.

In the tony Mohandissin district, police deployed force to disperse hundreds of protesters who had gathered after Friday prayers. They had gathered in front of the mosque. They chanted slogans against what they called the cession of the islands. (The Saudi government maintains that they were always its but had been leasing them to Egypt).

After only a few minutes, the central security forces attacked the protesters. The protesters stampeded, hoping to get away and avoid arrest.

By Shuruq’s count, some 30 were arrested and sent to the court at Dokki. But late Friday most of those arrested were released.

About 150 men left Friday prayers in Giza to demonstrate without a permit. In Maidan Giza, outside Upright Mosque, clashes broke out between regime critics and supporters. They chanted “They sold the land to Saudi Arabia,” “Egypt isn’t for Sale,” “Tiran and Sanafir are Egyptian, and “Still the Revolution continues.”

Arrests were also made in other Egyptian cities. Altogether hundreds were arrested.

Late on Friday afternoon, before the state security police could be deployed effectively, demonstrators began dispersing, with plans to return on April 25.

We’ll see, whether these are one-off protests, or whether a cascade might be beginning against the military-backed government>