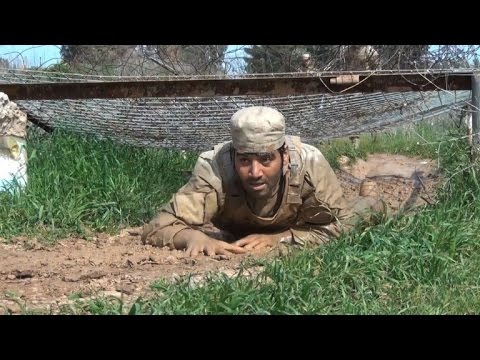 Robert Burns of AP reported on the visit inside Syria of the head of the US Middle East Command (Centcm), Army Gen. Joseph Votel, to assess the progress in US training of the Syrian Democratic Forces division. It is said to comprise 25,000 Kurdish fighters of the leftist YPG or People’s Protection Units along with 5,000 or 6,000 Arab fighters allied with the Kurds against Daesh (ISIS, ISIL).

A few dozen US troops are on the ground there, training the SDF, but the latter complain that Washington has provided them with no medium or heavy weaponry.

The US press pool was instructed not to say in what kind of aircraft Votel arrived or where exactly he met with the SDF, but the Arabic press is saying it was at Kobane, the largely Kurdish town that US air support helped save from deadly Daesh assaults.

The pro-Muqtada al-Sadr Iraqi news site, Nahrainet.net, denounced Votel’s visit as a clear violation of Syrian sovereignty, saying the US had declined to coordinate the visit with the legitimate Syrian government of President Bashar al-Assad. The site also accused the US of supporting, not just the leftist Kurds and their allies, but also hard line Salafi groups like the Army of Islam and the Freemen of Syria; it even said US support extended to the al-Qaeda affiliate, the Nusra Front (this is not true), and that Saudi Arabia and Turkey were also behind the Salafis.

The Mahdi Army or Peace Brigades of Iraqi Shiite cleric Muqtada al-Sadr are fighting as a militia in Syria on the side of the government of Bashar al-Assad against the Salafis.

Votel’s visit, contrary to what Nahrainet says, had nothing to do with the Salafi groups. Rather, his 11 hours inside Syria were spent with the Syrian Democratic Forces, who are ideologically as far to the left as the Salafis are to the Right. It is in fact a remarkable development that the US should be putting its hopes for defeat of Daesh in Kurdish militias that were more or less Communists during the Cold War. In the post-Soviet period they have evolved in an anarchistic direction and could be called post-communist. The mixture of anarchism and socialism makes them sound like the Syndicalists of the early 20th century, alongside whom George Orwell fought in the Spanish Civil War.

Votel’s visit was likely in preparation for a new, major campaign against Daesh, perhaps even an assault on Raqqa, the capital of the phony caliphate. The US appears to be eager to have the opposition militias, including Salafis, take and hold as much territory in Syria as they can before a permanent ceasefire sets in. Otherwise, there is a danger that with Russian backing the al-Assad regime could roll up a lot of the rebel forces and so reestablish its stability.

Russia is also friendly with the Syrian Kurds, so some of Washington’s new haste to deploy the SDF against Daesh may derive from fear that otherwise they might go to Russia for backing.

While the Obama administration’s initial commitments inside Syria were small, when you have a situation where the Centcom commander is illegally sneaking into another country to consult with 31,000 US-backed local troops, the potential for mission creep and troop escalation is serious.