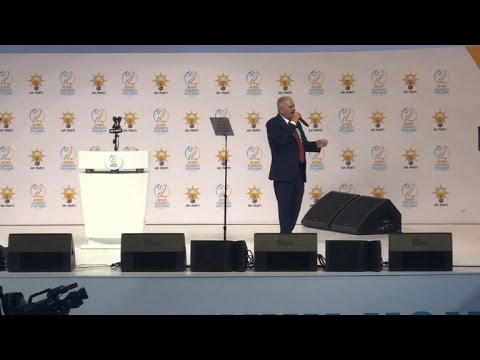 Binali Yildirim was unanimously selected by members of Turkey’s ruling party to be the country’s next prime minister.

Turkey’s incoming prime minister says his government’s top priority will be a new constitution to create an executive presidency, a move that would give President Tayyip Erdogan the broad powers he has long sought.

Binali Yildirim also told a special congress of the ruling AK Party on Sunday that he would continue the fight against the Islamic State group and Kurdish militants at home and in Syria, saying the change in leadership would not affect the campaign.

“They are asking us when the anti-terror operations will end. I am announcing hereby that operations will end when all our citizens are safe,” Yildirim said in an emotional speech. “Operations will continue without pause until the bloody-handed terrorist organization PKK ends its armed actions.”

The wide-reaching offensive against the guerrilla PKK has claimed the lives of hundreds of Kurdish civilians, drawing the criticism of German Chancellor Angela Merkel on Sunday. The military and political attack on Kurds, she said in an interview, will have “serious consequences,” referring to the recent lifting of parliamentary immunity for pro-Kurdish politicians.

Merkel will meet with Erdogan this week as she attends the first humanitarian summit to reinforce her commitments to the refugee deal, which critics say has compromised her stance against the Turkish leader.

Yildirim, the current transport minister and a close ally of Erdogan for two decades, was the sole candidate for party head, and therefore the next prime minister. He vowed that under his leadership the AKP’s way would be “Erdogan’s way.”

After winning the presidency in 2014, following more than a decade as prime minister, Erdogan was legally bound to renounce ties to the AKP and remain impartial. But he has retained strong influence over both the party he founded and the government it leads, frequently hosting cabinet meetings in his new palace.

Washington has lost confidence in the Turkish executive system and knows that any new prime minister “is not going to do anything that is unauthorized” and not worth the U.S.’s attention, said Professor Kemal Kirisci from the Bookings Institute to the Hurriyet Daily News.

Former prime minister Ahmet Davutoglu announced he would step down this month following weeks of public tension with Erdogan.

“Today our party came to another crossroad. Going to this extraordinary convention after a successful election was not something I had demanded. I am also aware of the questions it has created in your conscious,” said Davutoğlu on Sunday.

A co-founder with Erdogan of the AKP, Yildirim has been the driving force behind major infrastructure projects in Turkey which were one of the pillars of the party’s electoral successes during its first decade in power and the center of large-scale protests by environmentalists and activists.

His close relationship with construction giants and plan to “pool” funds to transfer to pro-government media also drew accusations of corruption in 2013, which the government never investigated.