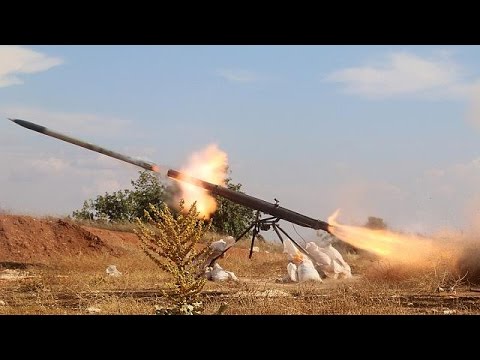 The left-leaning Beirut daily al-Safir (Ambassador) points out that less than two weeks after the Syrian Democratic Forces announced their campaign against al-Raqqa, the capital of the phony caliphate of Daesh (ISIS, ISIL), the SDF instead has veered off to the west in a bid to capture Manbaj. The SDF mainly consists of leftist Kurdish YPG fighters along with some American-trained token Arabs.

The SDF, with help from intensive US bombing, moved to the west of the Euphrates on Wednesday, taking over a dozen villages in the vicinity of Manbaj and ending up only 10 km from the city center.

SDF seems to be gobbling up the western shore of the Euphrates really quickly—bad day for IS. Map: @EdmapsCom #Syria pic.twitter.com/g1CP174zUp

Manbaj is a major intelligence and logistics center for Daesh. It is in a strip some 90 km wide next to the Turkish border through which volunteers slip into Syria to join Daesh (formerly thousands a month, now perhaps only 500 a month). It is very odd, if not downright suspicious, that Turkey hasn’t simply closed off this corridor on its side of the border.

Moving west might allow the YPG (oops I meant Syrian Democratic Forces) to cut off the Daesh supply routes into Syria entirely. Further, they might be able to establish a corridor to Afrin, the Kurdish canton in the west, creating a contiguous Kurdish de facto province that stretches from Afrin east to Kobane and then to the Jazeera or northeastern Syria. Critics of the Syrian Kurds among the Arabs express fear that they will ethnically cleanse Arab villages in this de facto Kurdish super-province.

Likewise, moving into the northernmost Dawsh-held territory will draw off fighters who would otherwise be in al-Raqqa for its defense.

So by moving west rather than south, the YPG is softening up al-Raqqa for invasion and also feathering the nest of Kurdish Syrian nationalism.

On Tuesday, according to BBC Monitoring, the Turkish state-funded news agency Anadolu (also known as Anatolia) put on its website in Turkish remarks of Foreign Minister Mevlut Cavusoglu, who slammed ‘the United States for cooperating with the PYD [Democratic Union Party] on the pretext that Al-Raqqa was going to be seized by regime forces.”

He said that US and Turkish special ops forces would be better placed than the Kurdish YPG to close the smuggling gap from which Daesh profits.

BBC Monitoring translates the Anadolu report: “Criticizing the United States for collaborating with the PYD on the pretext that Al-Raqqa was going to be seized by the Syrian regime forces, Cavusoglu it was never right or humanitarian to collaborate with another terrorist organization. Stating that the PYD’s goal was to partition Syria by seizing more land, Cavusoglu said: “In that respect America is unfortunately embarking on a process with the PYD that is very dangerous for Syria’s future. We already warned them. Yet, if we were to join forces; they have their special forces and we have our special forces, but unfortunately both the United States and Russia see a terrorist organization as a partner and they are supporting it. This is what we are objecting to . . .”

If Manbaj soon falls, as seems likely, Turkey will face the fait accompli of a new Kurdish mini-state on its border. Ankara is obviously furious at the US, which is urging the Kurds on. Despite Turkish oral offers of assistance, the US Pentagon has clearly decided that the YPG Kurds are the only game in town if the goal is to defeat Daesh in its lair of al-Raqqa. There are likely to be long-term repercussions for the US-Turkish relationship, on both sides, of these dramatic events.