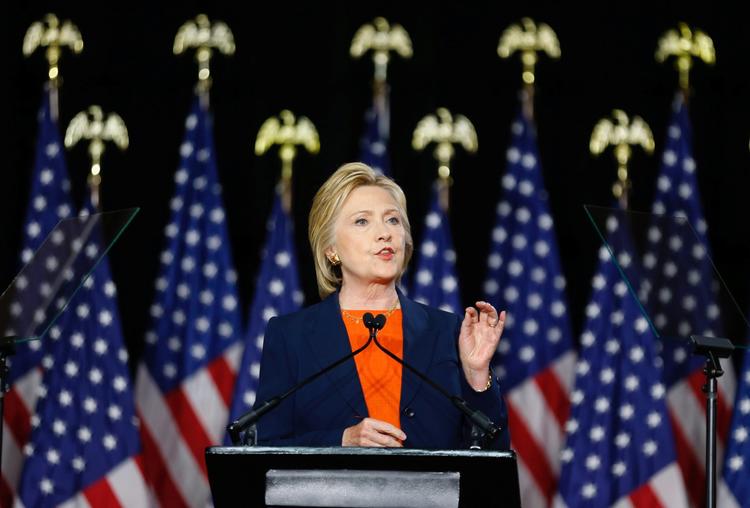 Both conservatives and progressives have argued Hillary Rodham Clinton is more “hawkish” than President Obama.

Robert Gates, the secretary of defense under both Presidents Bush and Obama, worked with her in the White House and called her “a tough lady.”

I think one of the surprises for Gates and the military was, here they come in expecting a very left-of-center administration, and they discover that they have a secretary of state who’s a little bit right of them on these issues — a little more eager than they are, to a certain extent.

In my new book “The Global Hillary,” I argue that Hillary’s strong stance on the national security involves two instincts.

First, her realist instinct predisposes her to take the world at face value, not an idealized worldview. Second, her feminist instinct makes her inclusive of differences between the sexes and tolerant of diversity.

As a hard-nosed realist – the daughter of a staunch Republican and a chief petty naval officer from World War II – she sees the world as a dangerous place. This has shaped her foreign policy. She is an interventionist, not averse to using military force to reshape the world. Her approach to Libya and Syria was more activist than President Obama’s.

She believes in the force of hard power – military and economic – to fundamentally alter a society’s political culture. The Kosovo war in former Yugoslavia during Bill Clinton’s presidency presents one of the examples of successful use of hard power. Vaclav Havel, the late Noble laureate and Czech president, has said Kosovo could be called an ethical war, because “this war placed human rights above the rights of the state.”

President Obama is more of a pragmatic idealist, the son of a bohemian and progressive anthropologist mother who worked for international development agencies in Southeast Asia and Africa. He is not inclined to be an interventionist. Obama has relied heavily on special operations and geopolitical strategy to reshape the world from Cuba to Iran and Syria.

In their book “The Hillary Doctrine: Sex and American Foreign Policy,” Valerie Hudson and Patricia Leidl examine the claim made by then secretary of state in 2010 that terrorism is fueled by lack of women’s development in different parts of the world.

The linkage between women’s development and violence against women as a national security issue has not been made explicit by the U.S. government in the manner that Hillary Clinton does. This axiomatic linkage states that the subjugation of women leads to the deterioration of human conditions. Clinton’s worldview suggests that in order to improve the social and developmental conditions around the world, we should invest in improving the conditions of women. This view is consistent with the postwar liberalism championed by Eleanor Roosevelt.

Clinton has systematically pushed for “women’s rights are human rights” as a policy of the government. As a daughter whose mother was born on the day women secured the right to vote (June 4, 1919), she finds the political deeply personal. This unique perspective on national security may be called “smart power feminism.”

Broad segments of the U.S. population, including suburban married working mothers, or “security moms,” and other middle-class voters of different races and ethnic groups seem to find this compelling.

Thus, Hillary’s “smart power” strategy relies on elements of America’s hard military power and soft cultural power. This allows Hillary’s hawkish instincts to coexist with her feminist instincts. It makes the world more “secure” and more “inclusive” simultaneously. Finally, it advances the cause of other female politicians entering the male dominated world of electoral politics.

Hillary’s national security feminism is smart power in an increasingly globalized world. It underscores the growing realization that women’s more empathetic and compromise-driven leadership style is better suited for the multilateral challenges of the 21st century.

George W. Bush retained the women’s vote in 2004 by warning “security moms” not to change boats midstream. In 2016, Donald Trump is employing a similar strategy with women by projecting himself as the strong man. This strategy may backfire, according to Jennifer Lawless of American University, who argues he won’t be able to “peel back some of that distaste” of his earlier comments.

As the security analyst Juliette Kayyem has suggested:

Only Clinton, as a mother and grandmother, can speak to the emotional fear for the safety of our children that animates so many women voters.

By openly discussing the security risks we face and proposing a less belligerent approach to our friends and foes in the Islamic world, she can win over the group of women who might otherwise vote conservative – that approximately 22 percent of eligible women voters who are white and married with no college degrees.

While the number of security moms may be shrinking, they are nonetheless an important demographic to capture from the conservatives or the Tea Party.

New global threats call for steady leadership. The rise of the Islamic State and homegrown attacks has created a gender gap in the attitudes toward terrorism.

Yet, the world demands steady global leadership from the U.S. A survey of residents of G-20 nations indicated they prefer Hillary Clinton.

Since the presidency is one of the last bastions of male-dominated political culture, Clinton has to be much tougher on national security issues in order to appeal to the majority of voters. At the same time, she has successfully advocated for the rights of all minorities, including women of diverse backgrounds.

The critics may argue the rise of national security feminism is problematic. It deflects the blame of widespread domestic violence or abuse in the U.S., where women are still treated as second-class citizens, and advances market-based neoliberal policies worldwide as if to rescue humanity. Inderpal Grewal at Yale University has observed that anxiety about women’s security externalize the “patriarchal violence” in the home by “taking on nationalist discourses of protection” against convenient targets.

However, Hillary Rodham Clinton – as the only female nominee of a major political party to offer a comprehensive platform of human rights issues – represents hard-won progress for the rights of women, children and men everywhere.