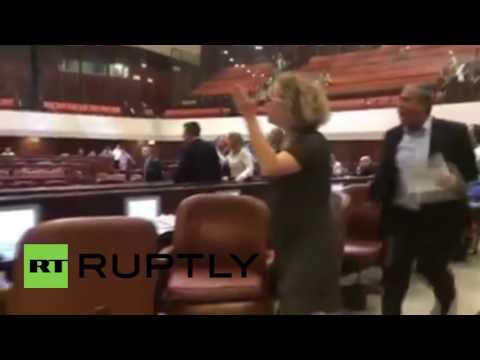 BETHLEHEM (Ma’an) — An Israeli army commander testified on Wednesday in the ongoing trial of Elor Azarya, an Israeli soldier accused of shooting and killing a prone Palestinian in Hebron in March, saying that there was no justification for the shooting, which has been labeled by the UN as an “extrajudicial execution.”

Col. Yariv Ben Ezra, the highest ranking commander in the case, reportedly told the military tribunal that Abd al-Fatah al-Sharif did not pose any danger to life when Azarya killed him.

Ezra testified that he had never seen a soldier “depart so extremely from the [Israeli army’s] rules of engagement” as Azarya did in the Hebron shooting, according to Israeli newspaper The Jerusalem Post.

Al-Sharif was shot and wounded alongside Ramzi Aziz al-Qasrawi on March 24 after the two allegedly stabbed and moderately wounded an Israeli soldier near a military checkpoint in the Tel Rumeida area in the southern occupied West Bank district of Hebron. Al-Qasrawi was also killed on the scene in contested circumstances which Israeli human rights group B’Tselem has claimed may also constitute an execution.

A video released on the day of the shooting showed Israeli medics tending to the wounded soldier while ignoring al-Sharif for several minutes, before Azarya stepped forward and put a bullet through his head.

According to social media reports from reporters present at the hearing, Ezra also admitted that Israeli medics gave priority to the wounded Israeli over the Palestinians, despite the severity of their injuries.

Israeli newspaper Haaretz reported that Ezra wrote a report the day before the shooting documenting cases where Israel’s emergency medical services had been unwilling to care for injured Palestinians, stating that while protocol dictates priority should be given to Israeli soldiers and settlers, it is the duty of medics to treat Palestinians as well.

Ezra described to the court how events unfolded after the initial shooting that subdued al-Sharif and al-Qasrawi, when he was informed a second shooting had taken place.

When two commanders explained to him that Azarya said after the shooting that “Terrorists should be killed,” Ezra understood “something irregular happened,” Haaretz quoted him as saying.

Ezra said it had been apparent early on that Azarya was unwarranted in killing al-Sharif and that “the more information was added that day, I understood that the shooting had not been justified. Since the shooting took place in a situation where life was not in danger, and the more I watched the video clip later, I understood that better.”

The commander also rejected previous arguments made by Azarya’s attorneys that the soldier acted out of self-defense because he suspected al-Sharif was booby trapped with explosives or could have reached for a knife, saying such claims were “disconnected from reality.”

Ezra echoed previous arguments that there was nothing out of the ordinary about al-Sharif’s jacket that could have raised suspicions he was concealing a bomb, and that he only became aware of that version of events after hearing reports from Israeli media later in the day.

“Throughout the first stage, I heard no such claim about any such thing. The first time I heard of that suspicion was at noon, through the media, when the event was publicized. Not on my way to the site, not at the site — the subject of fear of a bomb never came up.”

Ezra’s statements corroborated the testimony given by another Israeli army commander in the case, who told the court in June that there had been no operational justification for the shooting, and that Azarya told him directly “This terrorist was alive, and he needs to die.”

Claims that the young Palestinian could have reached for a knife were also dispelled after new video footage surfaced last month, capturing events after Azarya executed al-Sharif, showing an Israeli ambulance driver kicking the knife towards the body, which had been far out of arm’s reach.

According to The Jerusalem Post, the Israeli army prosecution on Tuesday claimed that Azarya “conspired” with the ambulance driver who kicked the knife, to conceal to Azarya acted out of revenge rather than self defense.

When questioned by the prosecution, the ambulance driver confessed he in fact moved the knife to ensure that later “Palestinians could not claim a knife wasn’t there.”

Additional footage released by Human Rights Defenders (HRD) in Palestine also showed an Israeli soldier kicking the knife, before the the fatal shooting, which HRD said represented a clear violation of international law.

Palestinians have long held fears that Israeli soldiers and settlers tamper with crime scenes involving Palestinians, with human rights groups accusing Israel of practicing a policy of extrajudicial executions since a wave of violence erupted in October, leaving more than 220 Palestinians and some 32 Israelis killed.