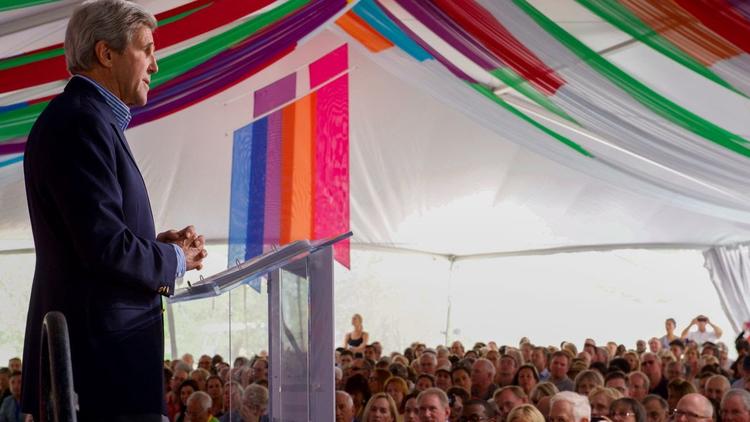 “There are a couple of subgroups underneath the two designated — Daesh and Jabhat al-Nusra — Jaysh al-Islam, Ahrar al-Sham particularly — who brush off and fight with that — alongside these other two sometimes to fight the Assad regime . . .”

In his opinion piece, Rogin characterizes what Kerry said as a gaffe that yielded to the Russian position that all rebels against the al-Assad regime in Syria are terrorists. Rogin also defended Ahrar al-Sham (Freemen of Syria) as not an al-Qaeda affiliate or in the line of command of al-Qaeda, though he admitted that it is Salafi and wants a radical Muslim dictatorship.

I’m not sure why the State Department officials who anonymously blasted Kerry think that Freemen of Syria are good guys just because they aren’t al-Qaeda.

And the fact is that they are in fact in a formal political and military coalition with al-Qaeda. I.e. they are playing Mulla Omar and the Taliban to al-Qaeda’s Ayman al-Zawahiri (the 9/11 mastermind to whom the Syrian Nusra Front reports).

I wrote some time ago:

“The Free Men are closely allied with the open al-Qaeda affiliate, the Support Front (Jabhat al-Nusra). This is not a mere alliance of convenience. They have formed joint operation offices. They coordinate closely militarily. They have a common rubric in Idlib Province of the Army of Conquest (Jaysh al-Fath).

When the two groups of holy warriors and their allies took over the city of Idlib . . . they conquered 18 villages north of that city largely inhabited by members of the esoteric Shiite Druze religion. The Free Men leadership gave control of the Druze villages to al-Qaeda, which promptly began stealing their property and killing them when they objected. Some 23 were massacred…

Note that the Free Men did not have to give the Druze in Idlib Province to al-Qaeda. They could have administered that territory themselves. That they thought al-Qaeda a suitable overlord for a group viewed by hard line Salafis as unbelievers and idolators shows that they just don’t care about human rights. They want a Salafi , Taliban-style Islamic state. We know exactly what happened to Shiite Hazara under the Taliban in Afghanistan. They were massacred.

If the Free Men are so moderate, they would renounce their close alliance with al-Qaeda and stop coddling the terrorists, who report directly to Ayman al-Zawahiri, a mastermind of the attacks on New York and Washington in 2001. That this intertwining of the Free Men with al-Qaeda is all right with the Washington Post is just baffling.

Me, I’d say a formal political and battlefield ally of al-Qaeda is pretty sketchy and just the sort of sub-group to which Kerry referred. Why would the US want to protect a group that differs in no respect from Afghanistan’s Taliban and wants to turn Syria into a dictatorial Salafi society? What would happen to Syrian Christians, Druze, Alawis and leftist Kurds under a Freemen government?

As for the Saudi-backed Army of Islam (Jaysh al-Islam), it is less politically tied to al-Qaeda but it is a frequent battlefield ally, just as Kerry said.

Josh Wood at the UAE’s The National pointed out last winter that Russia and Syria are not the only ones worried about the Army of Islam and the Freemen of Syria:

“While the groups both oppose ISIL, they are allies of Al Qaeda’s Syrian affiliate Jabhat Al Nusra and their behaviours during the war have been seen as tinged with extremist tendencies. Jaish Al Islam’s former leader Zahran Alloush spoke of Alawites and Shiites in derogatory terms and at times advocated that they be cleansed from parts of Syria. Last autumn, the group paraded captured Alawite civilians and soldiers through Damascus’ suburbs in cages, allegedly planning to use them as human shields against government air strikes. The group also does not shy away from gory displays of violence.

So what Kerry said was not inaccurate and it did not give away anything to the Russians. But it probably did anger Saudi Arabia and Turkey, who apparently roped the CIA into this business of allying with the Salafi Jihadis.

Really? In 2016, elements of the US government want to repeat the mistakes of the 1980s that in many ways led to the September 11 attacks? You don’t build up Salafi Jihadis and help them take over a country. They don’t believe in democracy, they hate minorities, and deep down inside they despise and want to harm the United States, even if they are willing to ally with it tactically to get what they want. After they have gotten it, that is when they start dreaming about taking down towers.

And by the way, that Israeli flirtation with al-Qaeda in the Golan Heights should have brought enormous US pressure to cut it out.

It is al-Qaeda for God’s sake.

So, in this instance both Kerry and Russian Foreign Minister Sergei Lavrov are right. A resolution of the Syrian civil war cannot come as long as the strongest groups are terrorists. It is true that the regime is also a state terrorist on a massive level. That is why it has provoked a tremendous revolution against itself. But these anti-democratic radical religious groups just give the alternative to the regime a bad name.

Or at least they would if journalists would do their homework and think straight.