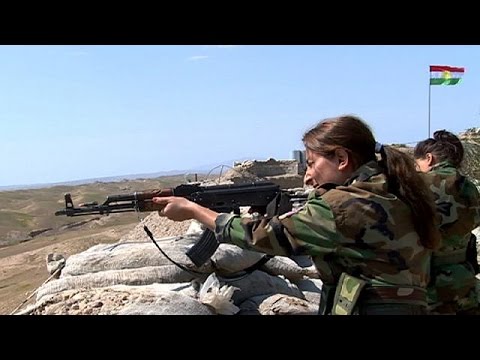 As secretary of State, Hillary Clinton was visibly shaken by sexual crimes against women and girls when she visited the Democratic Republic of Congo (DRC) in 2009. Sexual crimes in this central African country, known as the “rape capital of the world,” include the sexual exploitation of tens of thousands of girls abducted and trapped as child soldiers. Nonetheless, since 2010, President Obama has waived a congressionally mandated ban on military aid to countries known to exploit child soldiers, among them the DRC.

The DRC’s eastern region is exceedingly rich in rare minerals and exceedingly rife with decades of brutal war over those minerals. This country and three others—Nigeria, Somalia and South Sudan—each of which exploits thousands of child soldiers, will receive more than $161 million in U.S. military aid in fiscal year 2016.

The Child Soldier Prevention Act of 2008 bans the U.S. government from providing military resources and aid to countries that use soldiers younger than 18; it allows a presidential waiver in cases of “national interest,” however. But what possible “national interest” can override the lives of tens of thousands of children shattered in the worst of childhood nightmares—lives of being forced to torture, kill and rape, and in the case of girls, lives of being serially raped and impregnated?

At any given time, about 300,000 children between the ages of 8 and 18 are exploited as child soldiers in scores of civil and international conflicts in Africa, Asia and Colombia. In Sierra Leone’s civil war (1991-2001), 80 percent of fighters were between 7 and 15 years old; in Liberia’s conflict (1989-2003), up to 70 percent of government and rebel troops were children. Forty percent of soldiers slain in Colombia were children; the Lord’s Resistance Army in Uganda is mainly composed of children. They are abducted from agricultural fields, or taken en route to school or market, or when their village is attacked. Others join for reasons of extreme poverty and hunger; fleeing family abuse; revenge for enemy brutality upon their family; being drawn to a popular cause; and, in the case of some boys, as a way to garner respect from male elders. In-depth investigators of child soldiers conclude, “… never before in the history of warfare have children been so exploited on such a vast scale.”

What most people do not realize is how many child soldiers are girls—an estimated 40 percent, who are exploited, like boy soldiers, as servants, cooks, porters, spies, human shields, suicide bombers and fighters. In Sri Lanka, more than 43 percent of 50,000 children in armed groups were girls, a finding determined during peace talks between warring parties and UNICEF and documented by journalist Jimmie Briggs. Deepening their trauma, girls are taken into sexual slavery by boy soldiers, adult soldiers and commanders and, in some cases, sold in exchange for weapons. Given the popular image of boys as child soldiers, hundreds of thousands of girls constitute an invisible army and “forgotten casualties of war” in the rehabilitation process following the cessation of armed conflict.

Armed groups target children for wars because children—and particularly girls, because of sex discrimination—are obedient, vulnerable and malleable. Children can be more easily indoctrinated into being the next generation of armed rebels and terrorists. Child soldiers are cheap because they are unpaid and eat less than adults; and they provide functions such as cooking, cleaning and portering, thus freeing up adult soldiers for more rigorous fighting. With the prevalence of light but deadly weapons, both girls and boys are trained for combat. In a 2002 survey, nearly half the interviewed girls in armed groups described their primary role as “fighter.”

Despite their utility as fighters and servants, girl soldiers are raped, prostituted, mutilated, infected with sexually transmitted diseases including HIV/AIDS, and made pregnant by soldiers. Many are permanently injured and will suffer lifelong pain as a result of multiple rapes and untreated infections. Returning to their villages and homes, numerous girls have reported that they are rejected as filthy and immoral, and they are blamed for disgracing family and community honor. Even more shunned are girls who return pregnant or with children born of rape. Losing family and social support, they are compelled to turn to prostitution or stay with an abusive ex-soldier “husband” in order to raise their child and survive.

Moreover, even after commitments to release child soldiers, armed groups often refuse to give up girls, holding them captive as “wives.” Thus, the full cycle of misogyny entraps girls: ruthlessly violated as child soldiers, ostracized when returning home and often not released in the “peace” process.

Fifteen-year-old Grace Akallo was abducted in 1996 with 29 other high school girls from her boarding school dormitory at St. Mary’s College Kisubi in northern Uganda by warlord Joseph Kony and rebel soldiers of the Lord’s Resistance Army. Physically, the girls were pushed to the point of death, walking barefoot, given little food and water and beaten with sticks and the butts of rifles. And spiritually, they were driven to the point of death, forced to torture and kill other children—sometimes a sibling—in a seasoning process designed to dehumanize them, extinguish their consciences and break their wills. Kony forced the girls to train with AK-47s. He also distributed them among his commanders as “wives.” They were expected to fight even with babies strapped to their backs.

Akallo was given to a man “older than her father,” who on first encounter seized her and raped her. “I felt like a thorn was in my skin as my innocence was destroyed,” she wrote of his sexual violence. In her community, the stigma of rape is so extreme that ex-girl soldiers will admit to murder before they will admit to having been raped.

In contrast to the outcast plight of girl soldiers, many boy soldiers earn a manly status in their communities. Leymah Gbowee, the Liberian Nobel Peace Prize laureate, works with ex-child soldiers from Charles Taylor’s army during Liberia’s civil war. Joseph, a boy she counseled, explained that he became a child soldier because “boys who joined the rebellion came back and were really respected and were often seen in the company of the elders and community leaders.”

Gbowee is convinced that the nexus between violence, weapons and manhood is responsible for drawing many former boy soldiers into the brutal, macho cycle of war. Many of the girls she assisted were “child wives” of the ex-soldiers and had been abducted, raped and beaten into submission. With no exit, each girl was “caught up in a spiral of one individual trying to prove his maleness. … The abuse women suffer during conflict is a reflection of the interaction between men and women, boys and girls, during peace time.”

Compounding the excruciating burdens of girl soldiers is the failure of the disarmament, demobilization and reintegration programs of the United Nations and international nongovernmental organizations—programs intended to help former child soldiers with education, job skills and fitting back into society. Save the Children’s 2005 report, “Forgotten Casualties of War: Girls in Armed Conflict,” concludes that girls are caught between “recrimination from the armed group if they leave and from the community if they return home” and are invisible in the reintegration programs. The misogyny and neglect on all sides has sent many of them into prostitution for survival or resulted in their suicides. Former girl soldiers are more than twice as likely to commit suicide as their male counterparts.

For an exercise in unreality and moral depravity, Google images of “girl soldiers.” You will find a garbage heap of pornographic pictures: cartoons of large-breasted women with big thighs and some muscles, barely clothed, wielding a gun in each hand, looking like (so-called) “happy hookers” costumed for Armed Services Day.  Sprinkled among these are photos of young female soldiers, hanging out passively, like decorations, among male soldiers.  Of the first 200 images I perused, a handful portrayed real girl soldiers—serious beyond years with sad-to-death eyes. Yet even these photos lacked the gruesome reality of the tens of thousands of girls entrapped in armies and militias.

For contrast, Google images of “child soldiers.” Ninety-five percent of these images are boys. All are realistic war photos: children carrying, aiming and shooting weapons sometimes taller than they are; roaming streets in search of prey; poised to kill, faces deadly serious, some hardened, some older than their years, others still bearing traces of their stolen childhood. No airbrushed or pornographic reality on this site. Only a crucial omission: Real girl soldiers—who constitute up to 40 percent of child soldiers and suffer the most vile sexual violation and rejection—are missing.

We need to frame and shame the hypocrisy of passing a law to protect children caught in conflict and then violating it for that morbid excuse of “national security”—a coverall for American militarism, xenophobia, torture, erasure of civil rights and sexual exploitation. Otherwise, political statements that women’s rights are human rights are a sham.

Pat Hynes, a retired professor of environmental health from Boston University, directs the Traprock Center for Peace and Justice in western Massachusetts. She writes and speaks on issues of feminism, climate justice, U.S. militarism and peace.

Reprinted with author’s permission from Truthdig

Euronews: “The Kurdish Peshmerga women soldiers who are fighting on the frontline”