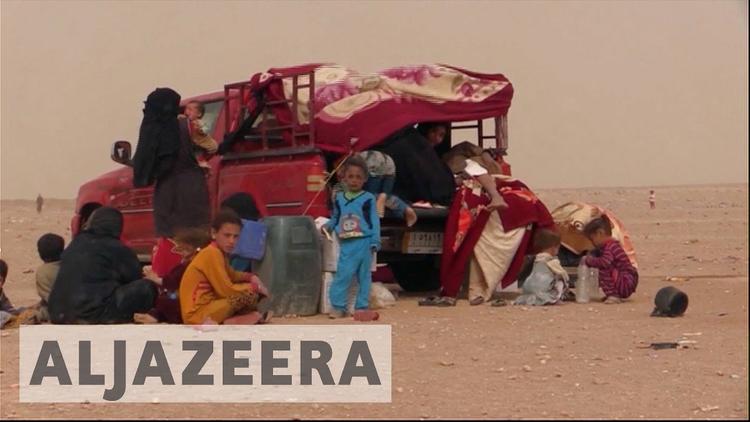 Inside their homes, a lack of food and water; outside, bombs, snipers and crossfire. Yet many Mosul locals are choosing to stay in the city, even though it’s a war zone.

Despite the fact that extremists have been driven out of their Mosul neighbourhood, Kawla* and her family are still sheltering in the narrow corridor under their concrete stairs. “I can’t describe how happy we were to get rid of the Islamic State fighters,” Kawla said in a telephone interview with NIQASH. “But it’s not yet over. We are still very scared and we have become part of this war, even though we don’t want to be.”

The Iraqi military’s counter-terrorism forces, the most professional, experienced, and best trained of the army, have succeeded in pushing the extremist group known as the Islamic State, or IS, out of several neighbourhoods. And they are moving further into the city. But the fighting is difficult and grinding and many civilians are getting caught up in the back-and-forth. According to interviews with Iraqi military, the IS group doesn’t seem to care how much damage they do to civilians in their attempt to fight their opposition.

“They were launching anti-tank rockets into the liberated neighbourhoods. We knew that those rockets would kill innocent children and women.”

“One night there was heavy fighting right outside, on our narrow street,” Kawla says. “There was shelling and shooting and an explosion broke all of our windows. Dust was everywhere and the children were so scared. They started shouting and crying while I just held them and tried to hide my own crying from them. That night, we didn’t sleep at all.”

“Finally dawn broke and things were very calm. My husband looked out the window and saw a black vehicle with an Iraqi flag. He said: Those are the counter-terrorism forces. We left the house as did our neighbours. Although we were so happy that the IS fighters were gone we were still worried. We were afraid of the Iraqi army – but then they started waving at us! We haven’t seen the army here for over two years. The commander of the forces told us not to worry. He said: Don’t be afraid. We came to liberate you. And everyone really just took a deep breath,” Kawla recounts.

“Even now, we still cannot get outside as the sky is raining rockets and bombs,” she adds. “We can’t cook and we have to find water; we’re living on bread and dates and food that we stored because we knew this day would come.”

Even after the Iraqi army manage to gain control of a neighbourhood, that is often not the end of the fighting. Though it seems clear they are doomed to fail, the IS fighters are not giving up easily and they are shelling in an apparently random and indiscriminate way.

NIQASH spoke with five individuals in Mosul, all living in different parts of the city and all of them told an almost identical story about the IS group’s tactics – these consist of loading anti-tank weaponry into a vehicle and then driving it around the city.

“They were launching anti-tank rockets into the liberated neighbourhoods from a utility that was parked right next to our house,” says Abu Saeed*, who is now in the Hay al-Nour neighbourhood in Mosul. “We knew that those rockets would kill innocent children and women.”

Abu Saeed said his family had also had their share of bombs. “The international coalition targeted the area where the rockets were being launched from. The explosion shook the whole neighbourhood but it only killed three IS guys. It was a weapon with limited force – otherwise the whole street would have been destroyed,” he explains.

Another local man told NIQASH about a rocket that fell on a house in the Wihda area in eastern Mosul. “The whole family were killed – a mother and her children,” the man said. “When the father got back from his store, he found the burnt corpses of his wife and children.”

More and more civilians are being killed and injured in Mosul. The Iraqi army says they have been given orders to protect civilians above all but the IS group’s indiscriminate shooting is killing many who stayed at home, as well as those who try to flee the fighting.

Hospitals in Mosul are overcrowded with wounded civilians who arrive from the neighbourhoods that the IS group still controls. In the areas where the IS group has been driven out locals are burying their dead in their backyards because it’s too difficult to transport the corpses to a cemetery and Iraqi military vehicles are being used to move the injured to hospitals further away, in comparatively safe Iraqi Kurdistan.

The situation is extremely problematic for both the Iraqi military, locals and humanitarian organisations – there are fears the operation to push the IS group out of Mosul could drag on for months. The Iraqi government dropped leaflets telling locals to stay in their homes but, according to reports, is apparently now considering a mass evacuation as the toll of innocent bystanders wounded or killed rises.

But some, like Kawla, say they won’t leave their homes. They say that they know that the journey out is dangerous and that once you get to a camp, the conditions are miserable. “I hope we can stay here and that we are not forced out,” Kawla says. “We are all just so tired.”

*Names of individuals still inside Mosul have been changed for security reasons.