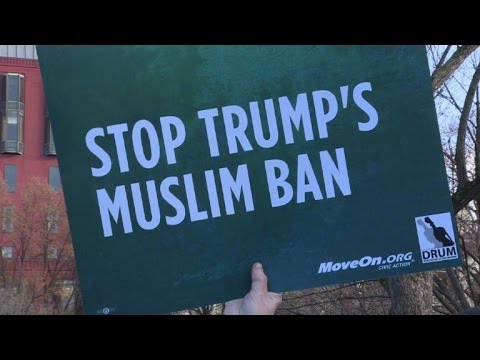 With just over a month to go before the inauguration of Donald Trump, Muslim activists are working to block the president-elect’s long-standing pledge to crack down on their community. Trump has proposed banning Muslims from entering the United States, voiced his support for the surveillance of mosques and has indicated he will create a nationwide registry of Muslim individuals. Last Monday, 200 Muslims and allies in Washington, D.C. marched from the Department of Justice to the White House, bearing signs reading “No Muslim Registry, Not Now, Not Ever” and “End the War on Islam,” while chanting “we wanna live safe, we wanna live free, we don’t want no registry.”

Monday’s gathering voiced a specific demand that is now endorsed by a coalition of grassroots organizations and 130,000 signatories: They want President Obama to permanently shut down the George W. Bush-era National Security Entry-Exit Registration System, or NSEERS. Created in 2002 in response to 9/11, NSEERS was used to target Muslims and Arabs for surveillance and detention. It ran until 2011, but was harshly criticized by many for being both discriminatory and ineffective. The Department of Homeland Security, which oversaw NSEERS, brought a total of 93,000 cases but failed to reach a single terrorism conviction.

Many who have been impacted by NSEERS are afraid to come forward about their experiences. Move On Campaign Manager Iram Ali shared one story on behalf of a woman whose family was impacted by the NSEERS registry: “My family was abused and humiliated. We were put into deportation proceedings, and later my home was raided by immigration authorities, who took me, my husband and my daughter into detention even though we had a pending asylum claim. My daughter and I were detained for 11 days, and my husband was detained for six months.”

After the program was suspended, many were still worried that it could provide a template for future targeting of Muslims, Arabs and those associated with these communities. Since the election, Trump has met with Kris Kobach, one of the architects of NSEERS. On November 20, Kobach, in a meeting with Trump, brought a document that — according to a leaked photo — appeared to be a proposal to “[u]pdate and reintroduce” NSEERS.

Ali says there’s no time to waste. “It’s so important for President Obama to shut [NSEERS] down now, because it will give us an upper hand going into the next administration.” Rabbi Jason Kimelman-Block of Bend The Arc, a Jewish social justice organization, underscored the importance of the strategy by saying, “We have very specific things we need to do right now to dismantle [NSEERS] and prevent it from being amped up.”

Organizers are also calling on the tech sector to take a stand. A coalition of organizers issued a call to major tech and social media companies to “ensure their resources are not used to support bigotry and discrimination.” While most companies have declined to take a definitive stand, Twitter has pledged to abstain from any creation of a Muslim registry. Leaders of the companies, including Facebook, Google and IBM are reported to be meeting with Trump in New York today. At the same time, scores of employees at major tech companies, including Google, IBM and Slack have pledged their personal refusal to help build any future registry. Online, supporters are using the #NoMuslimRegistry hashtag to register their own rejection of the proposed database.

Sarah Aziza is an Arab-American writer, graduate student and activist based in NYC. She has previously worked among refugee populations in North Africa, Jordan and the West Bank. Her areas of focus include immigration, human rights, international politics, feminism and mental health. She is a lover of the story-less-told. Find her on Twitter @SarahAziza1 or www.sarahaziza.com

AFP: “Rally in support of Muslims in Washington”