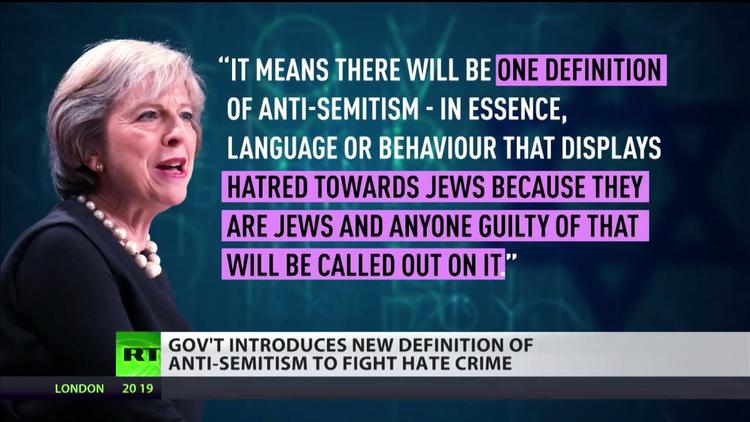 The British government of Theresa May officially adopted on Dec. 12 a new definition of anti-Semitism that includes legitimate criticism of Israel.

The definition was adopted earlier in the year by a pro-Israeli group IHRA, although it was considered but abandoned by the European anti-racism agency in 2005.

It is also a rather dangerous move which will most likely lead to an expanding chasm between British civil society and Britain’s political elite.

Israeli and pro-Israeli groups in the West have always been keen on conflating genuine racism and genuine criticism of the state of Israel, which stands accused of violating scores of United Nations resolutions and of war crimes in the occupied territories, especially Gaza.

Adopting the new definition comes on the heels of a manufactured crisis in British politics, in which the Labor Party under Jeremy Corbyn was falsely accused of being ‘soft’ on anti-Semitism among its members. This ‘crisis’ was engineered by pro-Israeli groups to detract from genuine campaigning among Labor supporters, in order to bind Israel to its international obligations, and end the siege and occupation of Gaza, the West Bank and East Jerusalem.

Last October, a cross-party group issued a report that contributed to the confusion of ideas, condemning the use of the word ‘Zionist’ as pejorative, and claiming that such a use “has no place in civil society.”

While efforts to protect Israel from freedom of speech in Britain are still gathering steam, the debate in the United States has been stifled long ago. There is little room for any criticism of Israel in mainstream American media or ‘polite’ society. Effectively, this means that US policy in the Middle East remains beholden only to Israeli interests, the diktats of its powerful pressure and lobby groups.

Following suit, the UK is now adopting that same self-defeating position, an issue which is hardly new. In fact, Friday of last week was an anniversary of great relevance to this very issue.

This was a reversal of an earlier resolution that equated Israel’s political ideology, Zionism and racism.

The longer text of the initial Resolution 3379 of 1975 was based on a clear set of principles, including UN Resolution 2106 of 1965 that defined racial discrimination as “any distinction, exclusion, restriction, or preference based on race, color, descent or national or ethnic origin.”

The reversal of that resolution was the outcome of vigorous US lobbying and pressures that lasted for years. In 1991, Israel had insisted that it would not join the US-sponsored Madrid peace talks without the disavowal of 3379 first. With the UN being one of the Madrid Talks’ sponsors, the US pressure paid its dividends at last, and UN members were obliged to overturn their early verdicts.

However, equating Zionism with racism is not the only comparison that is often conjured by Israel’s critics.

Recently, Ecuadorian envoy to the United Nations, Horacio Sevilla was adamant in his comments before a UN session, marking Nov. 29 as the International Day of Solidarity with the Palestinian People.

The tirade of condemnations that followed was expected, as Israeli officials seized yet another opportunity to hurl anti-Semitic accusations against the United Nations for persistently targeting Israel, while, supposedly, excluding others from censure.

As far as Israel is concerned, any criticism of the state and its political ideology is anti-Semitic as are any demands for accountability from Israel regarding its military conducts during war.

But why is Israel so concerned with definitions?

At the heart of Israel’s very existence lurks a sense of vulnerability which all the nuclear warheads and firepower cannot redeem.

Outlawing the use of the term Zionism is ludicrous and impractical, if not altogether impossible.

For Israelis who embrace the term, Zionism is many things, while for Palestinians, who learned to loathe it, it is, ultimately a single ideology.

In an article published in 2012, Israeli author, Uri Avnery, acknowledged the many shades of Zionism: early socialist Zionism (obsessed with the color red, and mobilizing around Jewish-only unions and Kibbutzim); religious Zionism which sees itself as the “forerunner of the Messiah”; right-wing Zionism which demands a “Jewish state in all of historical Palestine”; and secular, liberal Zionism as envisioned by its founder, Theodor Herzl.

For a Palestinian whose land was illegally confiscated, home demolished and life endangered by these very ‘Zionist’ forces, Avnery’s itemization is insignificant. For them the term ‘Zionist’ is essentially pejorative, and is anyone who advocates, participates in or justifies Israeli aggressive actions based on his or her support and sympathy for political Zionism.

In his article, “Zionism from the Standpoint of its Victims,” late Palestinian Professor Edward Said elaborates: “It is not unreasonable to find that the entire Palestinian-Arab experience seems unanimous about the view that Zionism visited upon the Arabs a singular injustice,” and that even before the British handed Palestine over to Zionist settlers upon which to establish a state formally in 1948, Palestinians universally opposed and variously tried to resist Zionist colonialism.”

Many countries share the Palestinian perception of Zionism as a form of colonialism, and that prevailing perception is a historical fact, not a product of collective anti-Semitic illusion.

The reason why the question and debate of Zionism must not waver to any intimidation is that the essence of Zionism never matured, evolved or changed from its early, colonial version.

Israeli historian Ilan Pappe agrees. “The Zionist ideology and strategy has not changed from its very beginning,” he wrote. “The idea was ‘We want to create a Jewish state in Palestine but also a Jewish democracy.’ So the Zionists needed to have a Jewish majority all the time…Therefore, ethnic cleansing was the only real solution from the Zionist perspective.”

This remains the main driving force behind Israeli policy towards Palestinians, and Israel’s refusal to break away from a 19th century colonial enterprise into a modern, democratic state for all its citizens.

To do so, would be to sacrifice the core of its Zionist ideology, constructed on an amalgam of ethno-religious identities, and to embrace a universal form of democracy in a state where Jews and Arabs are treated as equals.

The views expressed in this article are the author’s and do not necessarily reflect Ma’an News Agency’s or Informed Comments’s editorial policy.