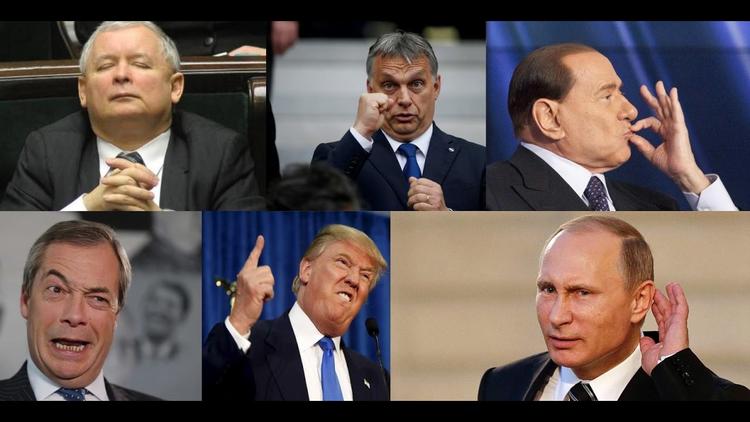 (Washington, DC) – The rise of populist leaders in the United States and Europe poses a dangerous threat to basic rights protections while encouraging abuse by autocrats around the world, Human Rights Watch said today in launching its World Report 2017. Donald Trump’s election as US president after a campaign fomenting hatred and intolerance, and the rising influence of political parties in Europe that reject universal rights, have put the postwar human rights system at risk.

Meanwhile, strongman leaders in Russia, Turkey, the Philippines, and China have substituted their own authority, rather than accountable government and the rule of law, as a guarantor of prosperity and security. These converging trends, bolstered by propaganda operations that denigrate legal standards and disdain factual analysis, directly challenge the laws and institutions that promote dignity, tolerance, and equality, Human Rights Watch said.

In the 687-page World Report, its 27th edition, Human Rights Watch reviews human rights practices in more than 90 countries. In his introductory essay, Executive Director Kenneth Roth writes that a new generation of authoritarian populists seeks to overturn the concept of human rights protections, treating rights not as an essential check on official power but as an impediment to the majority will.

“The rise of populism poses a profound threat to human rights,” Roth said. “Trump and various politicians in Europe seek power through appeals to racism, xenophobia, misogyny, and nativism. They all claim that the public accepts violations of human rights as supposedly necessary to secure jobs, avoid cultural change, or prevent terrorist attacks. In fact, disregard for human rights offers the likeliest route to tyranny.”

Roth cited Trump’s presidential campaign in the US as a vivid illustration of the politics of intolerance. He said that Trump responded to those discontented with their economic situation and an increasingly multicultural society with rhetoric that rejected basic principles of dignity and equality. His campaign floated proposals that would harm millions of people, including plans to engage in massive deportations of immigrants, to curtail women’s rights and media freedoms, and to use torture. Unless Trump repudiates these proposals, his administration risks committing massive rights violations in the US and shirking a longstanding, bipartisan belief, however imperfectly applied, in a rights-based foreign policy agenda.

The rise of populist leaders in the United States and Europe poses a dangerous threat to basic rights protections while encouraging abuse by autocrats around the world.

In Europe, a similar populism sought to blame economic dislocation on migration. The campaign for Brexit was perhaps the most prominent illustration, Roth said.

Instead of scapegoating those fleeing persecution, torture, and war, governments should invest to help immigrant communities integrate and fully participate in society, Roth said. Public officials also have a duty to reject the hatred and intolerance of the populists while supporting independent and impartial courts as a bulwark against the targeting of vulnerable minorities, Roth said.

The populist-fueled passions of the moment tend to obscure the longer-term dangers to a society of strongman rule, Roth said. In Russia, Vladimir Putin responded to popular discontent in 2011 with a repressive agenda, including draconian restrictions on free speech and assembly, unprecedented sanctions for online dissent, and laws severely restricting independent groups. China’s leader, Xi Jinping, concerned about the slowdown in economic growth, has embarked on the most intense crackdown on dissent since the Tiananmen era.

In Syria, President Bashar al-Assad, backed by Russia, Iran, and Hezbollah, has honed a war-crime strategy of targeting civilians in opposition areas, flouting the most fundamental requirements of the laws of war. Forces of the self-proclaimed Islamic State, also known as ISIS, have also routinely attacked civilians and executed people in custody while encouraging and carrying out attacks on civilian populations around the globe.

More than 5 million Syrians fleeing the conflict have faced daunting obstacles in finding safety. Jordan, Turkey, and Lebanon are hosting millions of Syrian refugees but have largely closed their borders to new arrivals. European Union leaders have failed to share responsibility fairly for asylum seekers or to create safe routes for refugees. Despite years of US leadership on refugee resettlement, the US resettled only 12,000 Syrian refugees last year, and Trump has threatened to end the program.

In Africa, a disconcerting number of leaders have removed or extended term limits – the “constitutional coup” – to stay in office, while others have used violent crackdowns to suppress protests over unfair elections or corrupt or predatory rule. Several African leaders, feeling vulnerable to prosecution, harshly criticized the International Criminal Court and three countries announced their withdrawal.

This global attack needs a vigorous reaffirmation and defense of the human rights values underpinning the system, Roth said. Yet too many public officials seem to have their heads in the sand, hoping the winds of populism will blow over. Others emulate the populists, hoping to pre-empt their message but instead reinforcing it, Roth said. Governments ostensibly committed to human rights should defend these principles far more vigorously and consistently, Roth said, including democracies in Latin America, Africa, and Asia that support broad initiatives at the United Nations but rarely take the lead in responding to particular countries in crisis.

Ultimately, responsibility lies with the public, Roth said. Demagogues build popular support by proffering false explanations and cheap solutions to genuine ills. The antidote is for voters to demand a politics based on truth and the values on which rights-respecting democracy is built. A strong popular reaction, using every means available – civic groups, political parties, traditional and social media – is the best defense of the values that so many still cherish.

“We forget at our peril the demagogues of the past: the fascists, communists, and their ilk who claimed privileged insight into the majority’s interest but ended up crushing the individual,” Roth said. “When populists treat rights as obstacles to their vision of the majority will, it is only a matter of time before they turn on those who disagree with their agenda.”