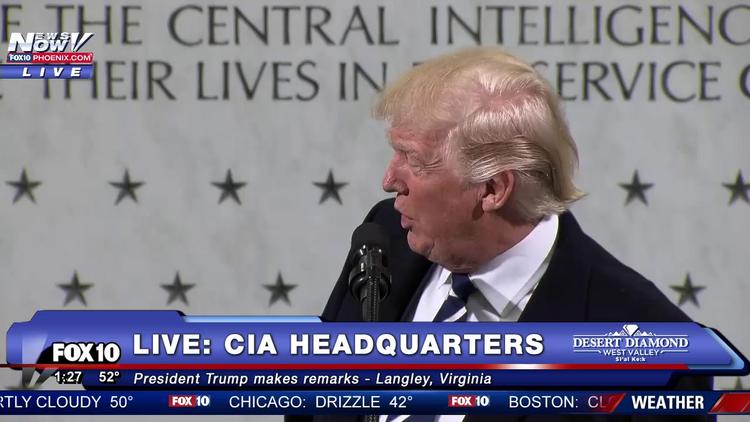 Donald Trump has had a contentious relationship with the US intelligence community, in part over their conviction that the Russian Federation attempted to use cyber tradecraft to interfere in the US election on behalf of Trump.

His visit to the Central Intelligence Agency headquarters at Langley, Va., was probably intended by his handlers to begin the work of repairing that relationship. From all accounts it did not. The most alarming thing Trump said, however, regarded Iraq:

THE OLD EXPRESSION TO THE VICTOR BELONG THE SPOILS. YOU REMEMBER, YOU ALWAYS SAY KEEP THE OIL. I WASN’T A FAN OF IRAQ, I DIDN’T WANT TO GO INTO IRAQ. BUT I WILL TELL YOU, WHEN WE WERE IN, WE GOT OUT WRONG. I ALWAYS SAID, IN ADDITION TO THAT, I SAID IT FOR ECONOMIC REASONS, BUT IF YOU THINK ABOUT IT, MIKE, IF WE KEPT THE OIL YOU PROBABLY WOULDN’T HAVE ISIS BECAUSE THAT’S WHERE THEY MADE THEIR MONEY IN THE FIRST PLACE SO WE HAVE KEPT THE OIL. BUT, OKAY. MAYBE WE’LL HAVE ANOTHER CHANCE. BUT THE FACT IS, WE SHOULD HAVE KEPT THE OIL. I BELIEVE THAT THIS GROUP IS GOING TO BE ONE OF THE MOST IMPORTANT GROUPS IN THIS COUNTRY TOWARD MAKING US SAFE, TOWARD MAKING US WINNERS AGAIN. TOWARD ENDING ALL OF THE PROBLEMS. WE HAVE SO MANY PROBLEMS THAT ARE INTERRELATED, THAT WE DON’T EVEN THINK OF, BUT INTERRELATED, TO THE KIND OF HAVOC AND FEAR THAT THIS SICK GROUP OF PEOPLE HAS CAUSED. SO I CAN ONLY SAY THAT I AM WITH YOU A THOUSAND PERCENT. . .

The United Nations Charter and other treaty instruments that are part of US law actually abolished the principle of ‘to the victors go the spoils.’ Conquering states in a war are not allowed to annex territory from the vanquished as of 1945. That’s what is wrong with the Israeli creeping annexation of Palestine since 1967.

Given that the US has 6000 troops in Iraq, as Thomas Doherty pointed out, this kind of talk puts them in danger from Iraqi nationalists who may begin seeing them not as allies against ISIL but as stalking horses for a sinister imperialism. Trump just painted a big red target on the backs of our troops.

“There are American troops in Iraq now, fighting Daesh. Talk like that increases risk to their lives, makes their mission harder.”

This isn’t speculation: the great Borzou Daragahi reports that the Iraqis are indeed ‘pissed’ and ready to fight for their oil.

Trump is also wrong that Iraqi petroleum fueled Daesh (ISIS, ISIL), or that the US could have “taken” Iraqi petroleum. This is because he does not know Iraqi geography or political geography. Most oil in Iraq is either down in Shiite territory at Basra (the vast majority of what is pumped) or up in Kurdish-held territory at Kirkuk. Daesh in Iraq had relatively little access to petroleum revenues, and the experts on it believe that contributions from Gulf supporters and taxes and plunder from local people (including on agriculture) were much more important. The situation is perhaps a little different in Syria, but we’re talking about Iraq.

Trump uses the phrase “take the oil,” apparently, to mean do a deal to handle the export of petroleum from a country. He said that Rex Tillerson, the CEO of ExxonMobil, goes to a country and “takes their oil.” I’m not sure whether he understands that this is typically a business deal negotiated by both sides rather than an act of coercion.

Any attempt by the United States to occupy Iraqi petroleum fields militarily and unilaterally would have resulted in massive bombings of them by Shiite militias in Basra, including Muqtada al-Sadr’s Mahdi Army (‘peace brigades’). You can’t export a flammable material like petroleum from a country nowadays against its people’s will. They have too many bombs. Any small garrison of US troops at Basra would have been constantly under attack.

Moreover, the Iraqi government would never have permitted it, so you’d have to overthrow that government and re-occupy Iraq. Likewise, if the US ‘took’ Iraqi petroleum in any way that reduced profits for Iraqis, it would de-fund the Iraqi state and military, which are already woefully weak, and actually help Daesh attack an enfeebled Baghdad! Trump is arguing for a policy that enthrones Abu Bakr al-Baghdadi as Caliph of Iraq!

In any case, ExxonMobil passed on Iraqi oil bids because the Iraqi ministry of petroleum put too many conditions on them and made them relatively expensive. China’s oil companies did some contracts, in contrast. If Dick Cheney really did overthrow Saddam Hussein to allow US petroleum companies to get at Iraqi oil, he may as well not have bothered. China’s economy has slowed so much that world thirst for oil stopped growing so fast, which put enormous downward pressure on prices. Also, US petroleum companies pioneered hydraulic fracturing to get oil out of fields like Bakken. The fields are probably shallow but for the moment the US isn’t importing as much petroleum as it used to.

So the fact is, the US petroleum companies probably don’t want to “take” Iraqi petroleum, don’t need it, and wouldn’t want all the massive security problems that would cause.

There is another calculation here. Oil is only used for transportation in the US, not for electricity generation (except in Hawaii). There are already 500,000 electric vehicles on US roads, and the number is about to spike exponentially. These vehicles can be fueled by solar and wind power. US demand for petroleum is about to fall off of a cliff, over the next decade, even setting aside the fracking issue.

Still, Trump’s team is talking about swinging into military action against Daesh in Iraq and Syria, and so are planning to add yet another war to all the overt and covert ones being fought by the United States (Iraq, Afghanistan, Pakistan’s tribal belt, Somalia, Libya, Yemen, etc. etc.) This will be Trump’s war for Oil and against Daesh. Such a war is quixotic. The Iraqi forces are near to finishing Daesh off in Mosul, its last major Iraqi stronghold, anyway. And the US doesn’t need or want Iraqi petroleum.

The problem with thinking about Daesh as primarily a military problem with a direct US military solution is that that strategy ignores the dual character of Daesh as also a terrorist organization, to which it will revert as it loses on the battlefield. How it is rolled up is important.

Trump meandered all over the place at Langley, talking about how young he is at heart (his narcissism would not let him get past the phrase ‘When I was younger’ and so he had to spend a lot of time dancing around being elderly). He talked at length about how he campaigned, how many rallies he held, all of this inappropriate in a room full of analysts and field officers.

He unwisely stood in front of the wall at Langley HQ that lists the over 100 CIA field agents killed in the line of duty. He only acknowledged them in a sentence.

Trump at one point said, “BUT THE MILITARY GAVE US TREMENDOUS PERCENTAGES. WE WERE UNBELIEVABLY SUCCESSFUL IN THE ELECTION WITH GETTING THE VOTE OF THE MILITARY. PROBABLY ALMOST EVERYBODY IN THIS ROOM VOTED FOR ME, BUT I’LL NOT ASK YOU TO RAISE YOUR HANDS.”

CIA personnel have standing instructions, like many US government employees, not to speak at the level of policy, only of analysis. Policy, they feel, is above their pay grade. Trump bringing up whether they voted for him, in this teasing way, apparently set off loud alarm bells inside the agency, according to ex-CIA chief John Brennan. The last time intelligence was highly politicized, the pressure came from Bush-Cheney and produced a faulty National Intelligence Estimate on Iraqi ‘weapons of mass destruction’ that the Agency has never lived down.