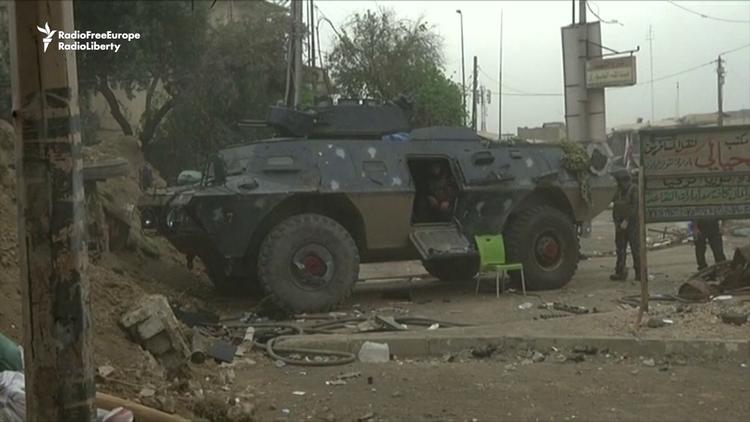 As pro-Iraq forces close in on the Islamic State fighters in Mosul, civilians trapped in the city with them, say the extremists roam around wearing suicide belts and appear to be ready to fight to the death.

Word from inside Mosul makes it clear that the extremist group known as the Islamic State is preparing for their last stand.

“We are caught between the bombardment of the Iraqi military and the crimes committed against us by the Islamic State,” one Mosul resident, who is still trapped in the extremist-held areas, told NIQASH in a phone call. “In the past two weeks, the Islamic State fighters have killed more than 80 people around us. Some of them were our friends and neighbours. They torture them, mutilate their bodies after death and then hang the corpses on power poles.”

The sounds of shelling can be heard in the background during the phone call. “The Islamic State cars drove around the streets here with corpses,” the man continued. “They throw one or two bodies in each alleyway, in order to terrorize the people and prevent them from trying to escape.”

When the IS fighters arrived, we begged them to leave in case we became a target. He told us: Your lives are not more precious than our lives.
The Islamic State, or IS, group won’t hesitate to kill those trying to escape, he explained. “They say that any person who tries to go to areas not controlled by the IS group and not part of their caliphate must be an infidel, and therefore deserves death.”

It seems as though many of the IS fighters know that they must soon make their last stand and they appear to have chosen the Mosul neighbourhoods in which this will happen, even renaming the areas.

Iraqi pro-government forces and army have managed to take control of more than half of the western side of the city, which was previously under extremist control. The eastern side was cleared of IS fighters several weeks ago.

There are very few areas still to be liberated but the ones that remain will be the hardest, the head of Iraq’s elite counter-terrorism forces, Abdul Ghani al-Asadi, has said.

The IS group is present in large numbers in two main areas. The first is the neighbourhood known as the old city. The extremists are making use of the high population density and the narrow alleyways; additionally if the houses in this area are shelled at all, there is great danger of collapse onto other buildings as they are old, fragile and built very close to one another.

This means that the potential for air strikes, which have been decisive elsewhere against the IS group, is extremely limited. The IS fighters, who wear belts of explosives in case they need to commit suicide, know this, as they travel among the civilian population trapped in the area.

The old city also has symbolic value for the IS group and for the Iraqi pro-government forces. It houses the mosque where the leader of the IS group, Abu Bakr al-Baghdadi, declared the creation of his Islamic state in 2014.

The second area is comprised of three adjoining neighbourhoods: 17th July, Musharrafieh and Harmat. In the north the area is bounded by the Tigris river, in the east there is a valley and then Syria lies to the west. However there’s no way to go west: Iraqi pro-government forces have completely surrounded the area, and an IS fighter would only be able to get about ten kilometres before being caught by them. The IS group has called this area, one of the first to fall to them back in June 2014, “land of the steadfast”.

The IS group is maintaining tight control in these neighbourhoods and building up its military presence, making use of delays in fighting caused by the mistaken bombing of civilians that forced anti-IS forces to slow down, for fear of causing more non-combatant casualties.

In the areas where there is fighting, civilians say they can watch the IS snipers on the roofs around them, moving from one house to the next.

“Two weeks ago, 19 IS fighters came into our house fully armed and some were wearing suicide belts,” says Barazan Ahmed, who fled Mosul’s Yarmouk neighbourhood after the Iraqi army arrived and who is now living in a camp for the displaced south of the city. “When the IS fighters arrived, we begged them to leave in case we became a target. But they refused. And one of them was very demanding. He insisted that we offer them food. He told us: Your lives are not more precious than our lives.”

Just a few hours before the Iraqi army arrived, anti-IS forces bombed houses near where Ahmed was sheltering; dozens were killed as the buildings collapsed, including some of his own relatives, the Mosul man says. That is why he and the rest of his family left the city.

It is becoming increasingly clear to civilians in Mosul that the IS fighters are not about to surrender. They know the Iraqi army is moving more slowly as it closes in on the extremists. They also know that that they, their families and their homes are caught in the middle of a hopeless situation.