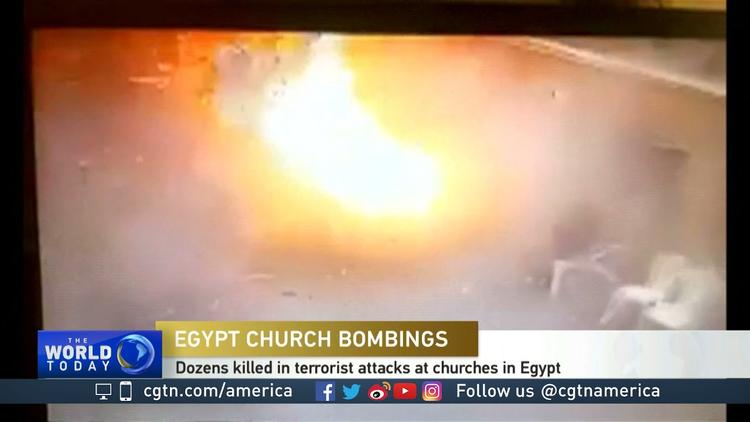 Daesh (ISIS, ISIL) claimed responsibility Sunday for two suicide bombings at Christian churches in Lower Egypt on Palm Sunday, which left over 40 dead and over 100 wounded.

The death toll would have been higher except that an Egyptian policeman stopped the suicide bomber in Alexandria from entering the St. Mark’s cathedral. The terrorist, fearing that his mission would go sideways, detonated his payload there on the street, killing some 17 persons, including the policeman, Emad al-Rokeby, who first stopped him, along with several of his colleagues.

In all the reporting on this incident, few will note that Muslims sacrificed their lives to protect a Christian congregation.

Egyptian president Abdel Fattah al-Sisi, who came to power in a 2013 military coup against the elected Muslim Brotherhood government, made the attacks a pretext to declare a 3-month state of emergency, suspending most civil rights and allowing police to enter homes without a warrant, cyber police to spy on virtually everyone, and the arrest and jailing without charges of whomever the government wishes. While one doesn’t wish to blame the victim (Daesh is responsible), it is also true that this sort of high-handed authoritarianism does make Egypt less rather than more stable.

Daesh issued a typically juvenile and moronic statement filled with extravagant prose, saying “Crusaders and their apostate allies should know the bill between us and them is very big and they will pay it with rivers of blood from their children, God willing. Wait for us, for we will wait for you.”

Crusaders are the Christian Powers and the apostates or those who are accused of abandoning Islam are the governments with friendly relations with Europe and the Americas. This way of carving up the world, however, is fairly stupid. Many Middle Eastern Christians are local nationalists and have a strong critique of imperialism, so you can’t just sweep them up into a Christian front with Donald Trump, who anyway doesn’t seem like much of a Christian.

Egypt is a country of some 85 million persons. The Coptic Christians form anywhere from 6 to 10 percent of the population, i.e. between 5 and 8.5 million persons. That is, they constitute a Christian community at least as big as Denmark but possibly as big as Austria, within the most populous Arab country (something like 1/5 of all Arabs live in Egypt). Some are poor, some are middle class and some are billionaires. Coptic Christians, one of the older Christian communities in the world, do not play as big a role in politics as their numbers would warrant, in part because Egypt has mostly been a dictatorship since 1952. In a genuinely parliamentary government they would be a sought-after swing vote.

Still, it is no secret that many Coptic leaders and probably most of the rank and file were extremely nervous about the 2012-2013 Muslim Brotherhood government, which they feared would reduce them to second class citizens on account of their being non-Muslims. When Mohammad Morsi was overthrown, angered activists of the Muslim religious right set a number of churches on fire. There have been other incidents, including a church bombing only last December.

* Revenge for the 2013 overthrow of the Muslim Brotherhood government of Mohammad Morsi (though the Coptic Christians had nothing to do with actually making the coup, and Muslim authorities such as the clerics at the al-Azhar Seminary were more consequential in their support for al-Sisi).

* The terrorists know that attacks on Middle Eastern Christians will make front-page news around the world.

* They know that deaths of minority members reflect poorly on the Egyptian government, showing it up as incompetent, and putting pressure on it.

* Depicting Egypt to the international community as a country in turmoil from the point of view of politics, society, and the economy.

One could add to this list an attempt to harm tourism to Egypt, which has fallen off substantially since 2010. It was still over 11 percent of Egypt’s gross domestic product in 2015, but suffered a steep decline in 2016, and … now this. (Statistically speaking, there is no particular danger in going to Egypt, which is generally if anything way too safe, as with most police states).

Finally, as always with sectarian terrorism, Daesh is attempting to sharpen contradictions. If it can get the Christians’ goat and make them lash out at Islam and Muslims, it can then set offended Muslims on them, and create a snowballing atmosphere of sectarian hatred in which moderate Muslims have to get off the fence and decide whose side they are on. Daesh pursued this strategy effectively in Iraq with regard to ramping up Sunni and Shiite tensions, until in 2014 they managed to take over the Sunni Arab areas of Iraq.

They aren’t likely to succeed in Egypt, where the urban population (a slight majority) mostly despises Muslim radicalism, and where rural Egyptians are a mix of Sufis, traditionalists, and even old-style Nasserist leftists. The population base for the Salafi Jihadis is mostly absent in Egypt, except in the Sinai, which is why they are carrying out desperate bombings like the one on Sunday.

The biggest danger is not that the Copts will fall for their tricks but that the Egyptian government will, ramping up its authoritarianism to the point where it alienates the general population (most of whom are quite young), the way Hosni Mubarak (in office 1982-2011) did.

CGTN: “Dozens killed in terrorist attacks at churches in Egypt”